Cavusoglu: The U.S. will understand

Cavusoglu criticized the Trump administration in their stance towards FETO, urging the U.S. to see the “true color” of the terror group. 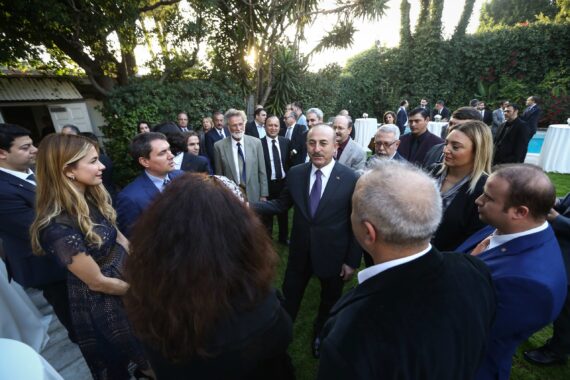 During a meeting with Turkish expats in Los Angeles on Saturday, Turkish Foreign Minister Mevlut Cavusoglu made comments on the fight against the Fetullah Terrorist Organization (FETO), Turkey-U.S. relations and the Syrian crisis.

Cavusoglu criticized the Trump administration in their stance towards FETO, urging the U.S. to see the “true color” of the terror group.

Underlining that Ankara has since the July 15 coup attempt in 2016 made it clear that it did not receive the satisfactory support for its allies – especially from the U.S. – FM Cavusoglu stated that “I hope the U.S. understands it someday.”

The Turkish administration has consistently called for the extradition of the FETO leader, Fetullah Gulen, who is still residing in the U.S. Regardless of the fact that the Ministry of Justice completed all paperwork, including evidence that Fetullah Gulen was the main orchestrator of the failed coup attempt, Washington has refused to hand over the coup leader.

In response to these developments, FM Cavusoglu re-emphasized that neither an extradition nor an investigation has been launched by the U.S.

FETO is not only accepted to be the group behind the July 15 coup attempt, but it is also acknowledged that the group has infiltrated many state institutions, with the aim to overthrow the government. The group has a major alliance and network with many different groups across the world.

During his speech Foreign Minister Cavusoglu described the U.S. as one of Turkey’s most important allies.

“There may be some disagreements on some issues, but there has been a tension [recently] in our relations because the issues of FETO and the U.S. arming of the PYD.”

“We are trying to overcome them through dialogue,” Cavusoglu added.

Turkey-U.S. relations had seen a standstill during 2017, as the visa crisis that erupted between the two countries occurred for the first time in their diplomatic history. The failure of the U.S. to support Ankara’s fight against FETO and the continuous military supplies to the PKK’s Syrian offshoot, YPG/PYD, have remained as core problems in relations.

While Turkey insists that the Syrian crisis should be solved by paying attention to the Geneva, Astana and Sochi processes, Washington has remained arming a terrorist organization in order to fight against another (DAESH).

The YPG/PYD remains a dominant national security threat to Turkey as the PKK terrorist organization has – for over 30 years – been in war against the Turkish state.

In regards to recent developments made through the Astana talks and Sochi process, Mevlut Cavusoglu, noting that the situation is still “not totally good,” stated that “It is impossible [to be totally good] without a political solution and without bringing stability to Syria, but we are going well.”

The FM added that Turkey is “focused on the political process” and that Ankara is “playing a leading role.”

Turkey has been one of the most affected of the Syrian Civil War as the country is currently home to approximately 3.5 million Syrian refugees.

Cavusoglu is expected to leave Los Angeles on Saturday and head to Canada, where he will attend an international foreign ministers meeting on North Korea.

The FM is also expected to meet with U.S. Secretary of State Rex Tillerson during this event.