After 12 years as Chancellor, the popularity of Mrs. Merkel is shrinking. The electorate has increasingly become dissatisfied with her personality and particularly with her “liberal” decisions for instance regarding the refugee crisis – which is also the main reason for the right-wing AfD’s success. 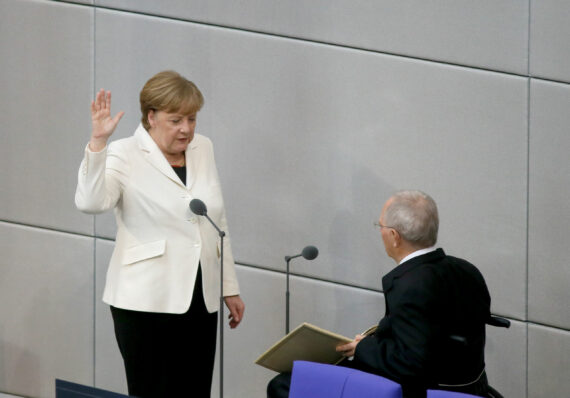 Bundestag President Wolfgang Schaeuble holds up a copy of the German Constitution as German Chancellor Angela Merkel takes her oath to serve her fourth term as chancellor following her election by the Bundestag on March 14, 2018 at Bellevue Palace in Berlin, Germany. Anadolu Agency

171 days after the federal elections when main parties such as the Christian and Social Democrats had suffered damaging losses, on March 12 the German parliament finally re-elected Angela Merkel as the head of her new-old federal government.

It is the fourth term of the CDU leader and Chancellor Merkel who was initially unable to arrange a coalition government with the environmentalist-leftist Green Party and the pro-business/liberal FDP. In the second attempt, subsequent to Federal President Frank-Walter Steinmeier’s appeal to the leaders of all parties to “not entirely preclude the possibility of forming a government,” the Christian Union parties (CDU/CSU) and the Social Democrats (SPD) finally agreed to negotiate for a new-old “grand coalition.” Otherwise, new elections would have mean new losses for both parties. The SPD’s initial unwillingness to talk with the CDU/CSU has been based on the fact that the right-wing populist Alternative for Germany (AfD) would then be the main opposition party in the federal parliament. Unfortunately, having gained 12,6% of the vote in September 2017, the right-wing populists are currently represented as the strongest opposition party.

Nevertheless, subsequent to President Steinmeier’s appeal, the SPD had agreed to start negotiations with the CDU/CSU. These negotiations launched at the end of January and were completed successfully two weeks later. Finally, and despite a complicated inner-party struggle and a kind of splitting process among the Social Democrats, the three parties were able to sign the new coalition agreement on March 12, 2018.

It’s interesting that in Chancellor Merkel’s new cabinet, except from Merkel herself and her Minister of Defence, Mrs. Ursula von der Leyen, the entire cabinet has been changed. Some new people have occupied ministerial positions. These include the Ministry of Foreign Affairs by former Minister of Justice, Heiko Maas (SPD) and the Ministry of Finance by Olaf Scholz (SPD), who is also the Vice-Chancellor. Politicians known for their loyalty to Mrs. Merkel, such as the former Federal Minister of the Interior, Thomas de Maiziere (CDU), had to be replaced with a CSU politician, Horst Seehofer. Reasons for these kinds of maneuvers are based on the fact that Merkel had to make concessions to the CSU and SPD by aiming to build a coalition government. Consequently, even so-called traditional CDU ministries such as the Federal Ministry of the Interior were handed over to the Bavarian partner CSU, and the Federal Ministry of Finance to the SPD.

After 12 years as Chancellor, the popularity of Mrs. Merkel is shrinking. The electorate has increasingly become dissatisfied with her personality and particularly with her “liberal” decisions for instance regarding the refugee crisis – which is also the main reason for the right-wing AfD’s success. On the other hand, Merkel is still resisting against calls from her own party’s conservative wing to establish a new and more ‘conservative’ path.

Consequently, due to such a decrease in popularity, both within the electorate and within conservative voices of her own party, there is a concise belief that Chancellor Merkel may only have about two years left in office. Due to these ‘domestic’ conditions, it is assumed that Merkel will prepare her party for an era without herself – unless she does not exclude a fifth term. By this, a possible new future Chancellor candidate, Annegret Kramp-Karrenbauer, might be the new general secretary of CDU, who was until February prime minister in one of the smaller German federal states. Even though she represents a more conservative orientation of the CDU compared to Merkel, she would be a more moderate person in contrast to the younger and right-wing biased conservative circles gathering around Jens Spahn (37). Spahn, who publicly criticizes Merkel’s decisions regarding her refugee policy, represents a more ‘conservative’ generation. However, as a strategic move, Merkel appointed him as Minister of Health in her new cabinet in order to diminish his oppositional tendencies and possible future ambitions. While time will show whether Merkel will be successful, it is worth to note that she is known for previous similar kinds of strategic maneuvers utilized in order to terminate the political ambitions of potential opponents.

Thus, alongside global and regional challenges, during her fourth term, Merkel has to face serious domestic issues and in particular challenges within her own party. By this, she most probably will have to manage her succession against potential “conservative” and –unfortunately AfD alike – populist young circles. However, if Chancellor Merkel survives her new four year term, she will be catch up to the 16-year-era of former Chancellor Helmut Kohl (CDU, 1982-1998).