China Caught Between Nationalism and Multiculturalism

The rise of nationalist discourse in China is not only a threat to regime security, but also to a peaceful regional and global order. 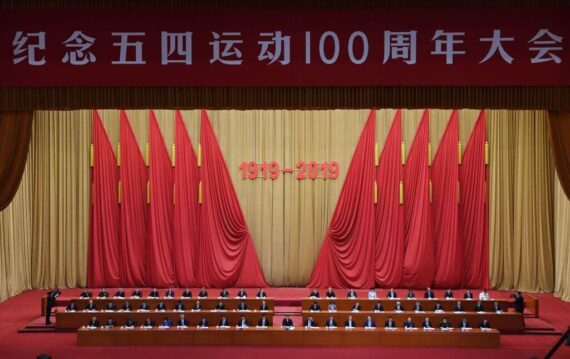 China's President Xi Jinping (C) speaks at a ceremony marking the centennial of the May Fourth Movement, a landmark student protest against colonialism and imperialism, in Beijing's Great Hall of the People on April 30, 2019. Getty Images

On May 4, 1919, thousands of students and intellectuals gathered against Western imperialism. The demonstrations then turned to shape the future political and ideological debates in China. The May Fourth Movement was the first organized nationalist reaction from the Chinese people against Chinese traditional values failing to respond to foreign aggression and imperialism.

The legacy of the May 4 movement still affects current political discussions in China. According to one of the famous Chinese historians, all other mass political movements, from the New Cultural Movement to Tiananmen, followed the legacy of May 4 in China. This also led to the new discussion on the legitimacy of the modern Chinese nation-state. Since then, all Chinese political movements, from liberals to communists, have used one form of nationalism as a political tool to achieve expected outcomes in their ideological battle.

In political reality, this tendency to use nationalism as a political tool by various political elites and intellectuals has not actually produced a desired outcome, since the nationalism itself has had no tool to control over-reactions by mass movements. Multiple cases in Chinese political history have proven that the rise of nationalist sentiments had never created a land of paradise in China. This situation even led Chinese society to suffer during the Great Leap Forward and the Cultural Revolution.

Chinese political elites have recently decided to use nationalist sentiments.

Contrary to these historical lessons, Chinese political elites have recently decided to use these nationalist sentiments again. Now, it is a little different since both the friends and foes of the Chinese Communist Party praised President Xi Jinping’s speech during the 100th anniversary of the May Fourth Movement. During this speech, President Xi emphasized both positive and negative sides of the story by encouraging the youth to support the party’s legacy. Although the May Fourth Movement occurred within different historical dynamics, Xi Jinping had actually been ignoring the anti-authority themes of the movement.

The legitimacy crisis in China

The party’s new approach to the May Fourth Movement, along with Xi’s 100th anniversary speech, served as a new kind of national awakening that was suitable for Xi’s “new era” of Chinese power in the beginning of the 21st century. A short-term political gain for the party would have been able to soften the potential anti-party debates before June 4, 2019, which was the 30th anniversary of the Tiananmen incident. Interestingly, not the Tiananmen anniversary, but demonstrations against the extradition bill in Hong Kong, which has already been delayed by the Hong Kong government, added fever to the current discussion on the legitimacy crisis in China.

The Chinese Communist Party has been looking for a new ground for its legitimacy to provide a stable political, economic, and social order in China for a long time. Neither the old strong ideological discourse of communism, nor the traditional Confucian thought provided a base for this new legitimacy. It seems that new nationalist discourse came to the fore as the only solution to the legitimacy crisis in both the party and the state. As can be seen in trade disputes with the U.S. and potential regional crisis in the South China Sea with concerns on economic growth and development, Chinese political elites need a comprehensive and cohesive discourse rather than discriminatory and exclusionary ones – such as nationalism. Then, the problem for Chinese political elites turns to explain the reasons behind the negative consequences of nationalist discourse in the age of China’s rise. There are at least four reasons behind the danger of new assertive and nationalist discourse in today’s China.

Neither the ideological discourse of communism, nor traditional Confucian thought can provide a durable legitimacy for China anymore.

The first is related to historical processes that Chinese modernization has taken place. Since the May Fourth Movement, China has experienced a number of legitimacy crises ranging from the civil war to the cultural revolution. All these experiences ended with new and progressive solutions to the legitimacy crisis such as the establishment of the People’s Republic of China in 1949, permanent membership in the United Nations Security Council in 1971, reform and economic integration in the global economy after the Cold War.

The rise of new assertive nationalism in China

Since China’s membership to the World Trade Organization in 2001, it has accelerated the process of global integration through comprehensive and cohesive reforms. China’s global integration and economic growth could not be realized without these cohesive and progressive reform agendas pursued by Chinese political elites. Nowadays, great technological changes and inventions such as artificial intelligence, 5G technologies and data science should not create a political environment turning back to the old and exclusionary discourses for consolidating legitimacy. Rather than exclusionary forms of discourse, progressive forces and cohesive reforms should give a direction to the current crisis in both global and domestic affairs in China. The direction of the reforms in China would create an opportunity for the swinging global order as well.

The second reason behind the danger of assertive nationalist discourse is related to the current economic development model in China. Since the reform and opening up, in spite of several severe crises with global and regional powers, China has never isolated itself from global and regional economic realities. Chinese products have circulated from Latin America to Africa and the Middle East through free market, open access routes and a rule-based global economic order. In addition to this export-oriented and open economic mode, as claimed by Remnin University’s influential scholar, Wang Yiwei, the Belt and Road initiative offers a new kind of globalization that is not exclusionary and discriminative in its essence. In the mid of this economic success story, China does not need any form of exclusionary nationalist discourse. What China needs is to find a more comprehensive and cohesive discourse to convince both the global and domestic economic audience to consolidate its legitimacy in terms of international order.

The third reason is about domestic political, economic, and social order in China. Throughout modern history, Chinese borderlands have provided both economic and political support for the mainland. Nevertheless, when China was in crisis, border regions such as Xinjiang, Inner Mongolia and Tibet, shaped the mindset of Chinese security decision makers. In fact, ethnic and religious diversity in China’s borderlands could become the source of stability rather than security paranoia that negatively affects the lives of Uyghur people these days. These ethnic and religious diversity and geopolitical concerns in the borderlands have become a vulnerability that should be sensitively dealt with for China. That is a natural indication of the multicultural structure of modern China. Thus, a new kind of assertive and unchained nationalist discourse will not provide peaceful solutions to these historical vulnerabilities bared by China.

The truth is that assertive nationalist discourse contradicts an original Chinese discourse, “zhonghua minzu 中华民族” symbolizing the harmonious and peaceful co-existence in Chinese society. The nationalist discourses even led to undermining the essence of of “zhonghua minzu 中华民族” which has been emphasized by Liang Qichao, who was an influential intellect during the May Fourth Movement in 1919.

Assertive nationalism, having a strong tendency for authoritarianism, could harm the potential economic dynamism of new middle classes and could even turn to instability in China.

Along with borderlands of ethnic minorities in China, the rise of a new middle-class could become more isolated with the heavy face of nationalist discourse. As seen clearly in the May Fourth Movement, nationalist discourses have a tendency to turn into an anti-authority theme. According to reports, by 2020, over 550 million people in China will be considered as middle-class, earning US$9,000 – US$34,000 a year. The economic freedom that the new middle class has gained throughout the reform era would probably turn to more specific political and social demands in the future. It is clear that assertive nationalism, having a strong tendency for authoritarianism, could harm the potential economic dynamism of new middle classes and could even turn to instability in China.

Last but not least, the rise of new assertive nationalism in China also creates concerns in regards to China’s status in international relations and for its geopolitical concerns. An exclusionary nationalist discourse could easily disturb regional powers, which China has had long historical controversies with – for instance, Japan and other Southeast Asian countries. “The rise of China” phenomenon has already changed the perception of security threats and the definition of national interests of these countries around China’s periphery. Rather than a risky and narrow nationalist discourse, China should continue to convince and provide a guarantee for these countries that it will not be an expansionist power. In the realm of global politics, assertive nationalist discourses harm China’s image of being a responsible global power identity with a peaceful economic development model.

Overall, the rise of nationalist discourse in China is not only a threat to regime security, but also to a peaceful regional and global order. In the short term, Chinese political elites should find a more comprehensive and cohesive discourse that we have already seen throughout Chinese history. That is, in the form of a multi-cultural, ethical and cohesive political, economic and social order.