Urging Turkish investors to start working from now to benefit from the immense opportunities that will come from the China-led Belt and Road Initiative (BRI), Pakistan's PM stated that it will connect those parts of the world that have had less connectivity and that BRI and CPEC are important opportunities for Turkey-Pakistan relations. 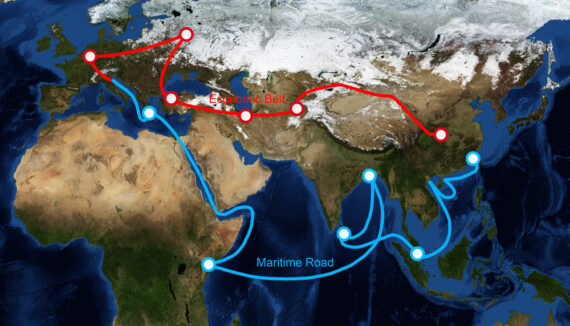 Upon the invitation of President Recep Tayyip Erdogan, Prime Minister of Pakistan, Imran Khan, paid an official visit to Turkey on 3-4 January. The prime minister was accompanied by a high-level delegation, including ministers of foreign affairs, finance, planning, and development and reform, as well as the advisor to the PM on commerce, foreign secretary, and special assistant to the PM on overseas Pakistanis. During the meetings held, bilateral relations were dealt with in all aspects. Steps were taken to further strengthen cooperation.

Discussions were exchanged on regional and international developments. The transfer of three FETO schools in the capital city of Islamabad to the Turkish Maarif Foundation was also discussed. President Erdogan said that they welcomed this transfer and the Pakistan Supreme Court’s decision to declare FETO as a terrorist organization. Erdogan further underlined that he believes this solidarity will continue in the fight against FETO. In a joint-statement, both parties reiterated their efforts to fight against the Fetullah Gulen Terrorist Organization.

Inviting Turkey to BRI and CPEC

In addition to cooperation on counter-terrorism measures, Imran Khan’s visit was of great importance in terms of economic relations as well. On the first day of his visit, Pakistani PM visited the Union of Chambers and Commodity Exchanges of Turkey and invited Turkey to the China-Pakistan Economic Corridor (CPEC). He stated how his government will provide all necessary assistance and support to the Turkish investors in Pakistan, and Khan underlined that Pakistan is a “virgin territory,” which has a lot of trade areas that have not been explored yet. He also added that there are huge oil, gas, copper, and coal reserves, and other admirals that have not been explored.

Imran Khan emphasized how enormous trade and economic activities will start via CPEC. He underlined how special economic zones are being established through this mega project. Urging Turkish investors to start working from now to benefit from the immense opportunities that will come from the China-led Belt and Road Initiative (BRI), he stated that it will connect those parts of the world that have had less connectivity and that BRI and CPEC are important opportunities for Turkey-Pakistan relations.

Pakistani government promised to provide all necessary assistance to Turkish investors in Pakistan, which is in Imran Khan’s terms a “virgin territory” having lots of trade areas as well as oil, gas, copper, and coal reserves that have not been explored yet.

The Belt and Road Initiative is a multi-dimensional project, which was announced in the last months of 2013 by Chinese President Xi Jinping as the “project of the century.” The initiative consists of two elements: the Silk Road Economic “Belt” and the 21st Century Maritime Silk “Road.” The name of the initiative comes from the combination of the “Belt” and “Road.” Citing the white paper of the BRI, “The initiative to jointly build the Belt and Road, embracing the trend toward a multipolar world, economic globalization, cultural diversity and greater IT application, is designed to uphold the global free trade regime and the open world economy in the spirit of open regional cooperation. It is aimed at promoting orderly and free flow of economic factors, highly efficient allocation of resources and deep integration of markets; encouraging the countries along the Belt and Road to achieve economic policy coordination and carry out broader and more in-depth regional cooperation of higher standards; and jointly creating an open, inclusive and balanced regional economic cooperation architecture that benefits all.”

With BRI, it is expected that China will be able to deliver it goods at a rapid speed to Asia, Africa, and Europe, with very low customs fees and will increase its export capacity to a great effect. This will increase China’s economic and political effectiveness in the region. In an environment where trade is developing, production and employment opportunities in partner countries are expected to improve. The initiative, which intends to connect China’s infrastructure and production capacity to over 70 countries on the route, consists of interconnected land and sea routes. In addition to this, with the BRI, Digital, Air, and Polar Silk Roads are expected to be completed in the upcoming period. The initiative stands out as the most important pillar of China’s “going-out” (zouchuqu) policy, which is among the main characteristics of the leadership of Xi Jinping.

CPEC: The rise of Pakistan

CPEC, as a symbol of cooperation between China and Pakistan, envisages the establishment of 2700 kilometers of road, railway, fiber connection, energy pipelines, industrial zones, and exclusive economic zones (MONE). Starting from China’s Xinjiang region and reaching the Gwadar coastal city of Pakistan’s Arabian Gulf exit, the line is one of the most important steps for China’s Belt and Road Initiative. With its strategic partnership, CPEC has a cooperation mode, “1+4,” with the following four pillars: Development and operation of Gwadar Port under modern conditions, construction of infrastructure, the establishment of trade and power line from China to Pakistan and exclusive economic zones in China’s investment in Pakistan.

In addition to the huge transportation projects, the enterprise has mechanisms that include effective cooperation in the fields of information technologies, energy production, transport, industry, agricultural development, and fight against poverty, tourism, and finance. The line has a critical position both in the Central Asian land connection of the BRI and in the marine connection where energy transmissions take place. The corridor has a leading position in the growth of the Pakistani economy as well as providing access to the Hormuz and Bab-Mandep straits, which play an important role in the energy import from China and Gwadar Port.

Turkey and Pakistan have a special mode of relationship that dates back to their foundation. During Turkey’s War of Independence, Pakistanis provided great assistance to Turkey in difficult conditions. The great poet Muhammad Iqbal’s speech at the Lahore rally to help Turkey is still reserved in the historical memory. Starting from this historical heritage, Turkey and Pakistan continue their paths as two brotherly countries. Thus, today, Turkey and Pakistan still continue their paths as two brotherly countries. Therefore, this relationship also has big potential on the economic domain. However, the full potential of bilateral trade has not been realized yet.

Turkey is ranked 32nd in Pakistan’s import partners, and 20th in exports. Of course, this is not considered sufficient, considering the potential between the two countries. However, it is developing, so there will be an increase in these numbers in the near future.

Pakistan’s exports to Turkey increased by 23% in the last 4 years and imports decreased by 26% in the same period. Thus, the import-export balance, albeit a small margin, is in Turkey’s favor.

Last year, Turkish officials confirmed that Islamabad and Ankara reached a defense agreement for the sale of 30 attack helicopters to Pakistan. In this regard, Islamabad will be buying Turkish Aerospace Industries’ (TAI) T129 attack helicopters. Although there are currently some problems stemming from the U.S. in regards to this sale, in the long term, Pakistan’s interest in the Turkish defense industry seems to continue.

Apart from these, we can say that CPEC will have a driving force in the development of relations between the two countries. With the completion of the corridor, commercial integration between China, South Asia, Central Asia, and the Middle East is expected to rise uniquely. Pakistan’s Gwadar Port stands out as the heart of this initiative.

China, which accomplishes 85% of its oil imports from the Malacca Strait, may reduce the share of its imports from Malacca and thus expand its scope for maneuver. At the same time, China’s western states will be able to export directly. With CPEC, the distance of 12070km of oil shipped from China to the Middle East will be reduced by 2414 km.

In this respect therefore, CPEC is not only an opportunity for China and Pakistan, but is also promising for other countries in the region, including Turkey. With Turkey’s possible participation to CPEC, Turkish ports in the Mediterranean, like Mersin, many become critical crossroads in the Maritime Silk Road of the Belt and Road Initiative. Apart from these, with sea and land infrastructure, bilateral trade relations between Turkey and Pakistan will face new opportunities. Similarly, the innovation centers and exclusive economic zones to be built will provide a positive contribution to Turkey’s integration into Asian trade.

With Turkey’s possible participation to CPEC, Turkish ports in the Mediterranean, such as Mersin, may become critical crossroads in the Maritime Silk Road of the Belt and Road Initiative.

Pakistan is developing a strategic partnership with China, thus trying to create a balance against its traditional rival, India. Turkey’s engagement in the region’s developing economic ties would give Pakistan a chance to have more alternatives and to increase its soft power. Provided that Turkey protects and develops its friendly relations with India, Turkey will also benefit from the opportunities by joining the CPEC. However, both BRI and CPEC need to be investigated, discussed and evaluated more in the country. Thus, we can see Imran Khan’s invitation as a starting point in this sense.