Although China-led foreign investment in various sectors contributes positively to employment and development, it can be observed that China’s growing ambitions in strategic areas like ports, airports, railways, and telecommunication, poses great threats in the long-term. 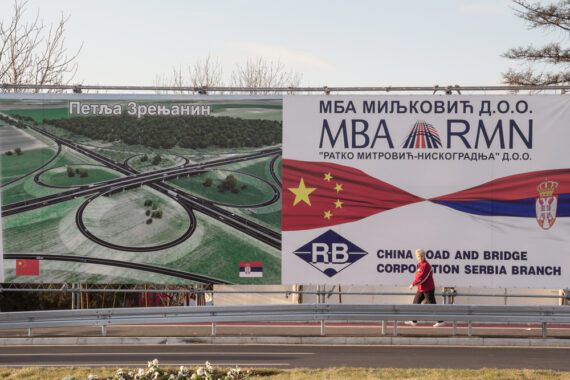 Woman passing by a billboard promoting Chinese investments in Serbia near the newly opened Pupin bridge over the Danube. Shutterstock

“If you want to be rich, you must build a road,” a very famous Chinese proverb says. Looking from Ankara, it seems like the Chinese leaders have altered the second part of the proverb as “you must buy a road.” The momentous spike over Chinese foreign direct investment (CFDI) in the EU has attracted attention all across the world, with its implications for the EU and the Union’s way of responding.

The Belt and Road Initiative, unveiled by President Xi Jinping in late 2013, was serving to deepen and diversify Chinese FDIs in EU countries. So, a large number of Chinese companies have increased their weight in different sectors both through takeovers, infrastructure enterprises, and so on. The number of enormous projects carried out by Chinese firms in the EU is increasing, and negotiations for new investments continue. Although China-led foreign investment in various sectors contributes positively to employment and development, it can be observed that China’s growing ambitions in strategic areas like ports, airports, railways, and telecommunication, poses great threats in the long-term.

Although China-led foreign investment in various sectors contributes positively to employment and development, it can be observed that China’s growing ambitions in strategic areas like ports, airports, railways, and telecommunication, poses great threats in the long-term.

CDFI in the EU

The annual sum of CDFI within the EU has jumped from €700 million in 2008 to €35 billion in 2016. There was a decline in this sum a year later due to China’s regulatory crackdown on outbound capital flows. In 2017, the number declined to €30 billion. However, despite this decline, ironically, the highest Chinese FDI in the EU, a €38 billion takeover of Swiss Syngenta occurred.

A large number of highways, ports and airports are being built, operated by Chinese enterprises. Chinese FDIs are also trying to acquire some European companies operating in the field energy and natural resources. Germany and the U.K. are among these countries that have received the most investment in these areas. In 2016, Germany received 12.6 billion dollars of Chinese foreign investment, while the U.K. received 9.6 billion. Other EU members, Spain, Belgium, and France, received 1.8, 1.4, and 0.8 billion dollars respectively. The most notable among the company’s purchases is the sale of Finnish Supercell to Tencent with a $7 billion agreement. Irish airplane rental company Avolon sold with a $10 billion agreement to the HNA Group. In addition to buying, Chinese companies have also developed partnerships with some European firms: Geely-Volvo in Sweden, Zoomlion-Cifa in Italy, Sany-Putzmeister in Germany and DongfangPSA Peugeot-Citroën in France.

It is noted that Chinese firms are able to enter into massive investments in Europe through the state support behind them, but the same does not apply for their European counterparts, which clearly contradicts the principle of reciprocity. While Chinese companies enjoy free market rights in all EU countries, there is no concept of equal rights for European countries in China.

Chinese firms focus on advanced technologies, well-known brands, and management practices. This mode of practice completely overlaps with China’s strategy of transferring know-how and technological capabilities. This asymmetric nature of bilateral conditions raised concerns over developing a common European response to China’s growing ambitions. EU Member States that have developing economies seem to be less diligent on pursuing this goal. Rather, they focus on maximizing their benefits.

In pursuit of a common European approach

As the EU has a very complicated political decision-making process, it would be very difficult to reach a common stance, as different members have different priorities. Although intensified China-based investments have positive effects on employment and development for Union countries, the operation of ports, airports, and motorways, which are of strategic importance for Chinese state enterprises, can be perceived as a long-term threat to economic and political independence.

Accession to the World Trade Organization brought substantial reform and the opening up of China’s market in many respects, but has not resulted in a sufficiently open investment environment. WTO agreements do not entirely cover FDI and any regulation has to be pursued via bilateral investment treaties or agreements within the EU. Investment Treaty negotiations started in November 2013. While many EU members have their own investment agreement with China, there is not a common European FDI policy. In September 2017, the European Commission adopted a proposal for a regulation establishing a framework for screening FDI on grounds of security or public order. The proposal is unveiled as a response to a rapidly evolving and increasingly complex investment landscape in the EU.

Although intensified China-based investments have positive effects on employment and development for EU countries, the operation of strategic ports, airports, and motorways, can be perceived as a long-term threat to economic and political independence.

The Union’s measures against China in the commercial field seem to have a high chance of directly affecting bilateral political relations. It is understood that, under the direction of Xi Jinping, China uses the Belt and Road Initiative both in its foreign policy as well as its direct capital investments as a tool of diplomacy, and in this sense, is conducting an eco-diplomacy. Within this framework, Chinese authorities have made statements that economic relations are only conducted with economic motivation, while rejecting the claims of “revolution.” The focus of Chinese firms on mergers and acquisitions instead of greenfield investments raised the concerns of “strategic takeovers.” As concentrating Chinese investments and other economic parameters are perceived as threats to independence on the European side, Chinese leaders have increased their responsibility to convince EU officials that these initiatives are for economic purposes only.

The EU should work together with Chinese counterparts to increase bilateral FDI flows by improving legal certainty and protecting European firms investing in China. In this way, economic relations between the EU and China would re-establish in a manner built upon national interests rather than national security concerns.

One should not forget the fact that the EU is attractive for Chinese FDI mostly due to its clear commitment to open investment. The more stress upon the enhancement of an investment screening mechanism would send a signal to Beijing, rightly or wrongly, for the EU to abandon its commitments. Actually, this scenario shows how intended regulatory engagements may make things worse.