CHP’s Possible Strategies for the 2019 Election

From the 1970s onwards, Erbakan established four different political parties – all which were shut down by military coups or judiciaries serving tutelage regimes. The CHP is known to have served as the civilian leg of the tutelage regime that polarized the nation through secularism and the Kurdish question for years and acted as the fiercest opponent of the Erbakan wing. 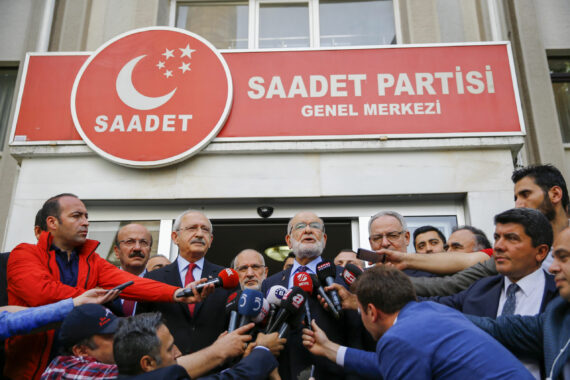 A Turkish proverb goes: “when a bald man dies, they say he had golden hair,” meaning that what was ugly or worthless seems beautiful or valuable once it has been lost. Six years after the death of one of Turkey’s leading political figures, Necmettin Erbakan, this saying has been viable for the attitude of the main opposition, the Republican People’s Party (CHP). From the 1970s onwards, Erbakan established four different political parties – all of which were shut down by military coups or judiciaries serving tutelage regimes. The CHP is known to have served as the civilian leg of the tutelage regime that polarized the nation through secularism and the Kurdish question for years and acted as the fiercest opponent of the Erbakan wing. The party also applauded the fall of the coalition government formed by Erbakan’s Welfare Party (RP) and the center-right True Path Party (DYP) on February 28, 1996.

When Abdullah Gul, who was also from Erbakan’s wing, was elected president in 2007, the CHP appealed to the Constitutional Court with the support of the military against Gul’s presidency on the grounds that the first lady was wearing a headscarf. For some reason, they did not oppose to the presidency of Koksal Toptan, who came from Suleyman Demirel’s wing although he was within the same party as Gul. As a result of an appeal filed by 134 CHP deputies including the party’s current chairman Kemal Kilicdaroglu for the cancellation of the election, the court cancelled the election with a scandalous ruling.

On February 27, 2018, the Felicity Party (SP) held a commemoration ceremony for the former Prime Minister Erbakan who passed away in 2011, one day before the 22nd anniversary of the February 28 memorandum. The CHP Chairman Kilicdaroglu also attended the ceremony and delivered a speech, which was televised live on pro-CHP Halk TV. Kilicdaroglu said he did not hesitate for a moment when he was invited and said “dear friends” while addressing an audience whom his party called reactionary for decades. After expressing that Erbakan was a widely-esteemed national figure and an exemplary patriot, Kilicdaroglu added that he was a politician who made no concessions on his beliefs, undauntedly fought all the pressures and was elected as prime minister thanks to democracy and his resoluteness.

Of course, Kilicdaroglu did not mention how he was overthrown. But while saying that “he did not pit the state up against the nation,” he implied that Erbakan did not defy the overthrowal of the democratically elected government by the military, hinting that point as a compliment. The crowd listening to his speech also seemed to have forgotten all the past incidents although the ones inviting and applauding Kilicdaroglu were once Erbakan’s colleagues. Apparently, they could not accept the fact that Recep Tayyip Erdogan founded the Justice and Development Party (AK Party) and achieved to be the ruling power for 15 years after leaving the RP.

At the latest election, Erbakan’s SP received 0.68 percent of the total vote. As this is added to the CHP’s 25.31 percent vote share, it still amounts to 25.99 percent. What really matters here is not the material effect of the 0.68 vote share. For the upcoming presidential elections, Kilicdaroglu aims to receive more than 51 percent. He says that what he wants to achieve is around 60-70 percent, which is a challenging task since there is no candidate as of yet. He probably won’t run for election. However, according to his statements, he can even support Gul, whose presidency he objected before, if Gul wants to run. It is not yet certain who will be the candidate, what kind of methods will be employed and whom they will ally with. On the other hand, the vote shares of the AK Party and the opposition Nationalist Movement Party (MHP), who decided to form an alliance for the presidential election, were respectively 49.99 and 11.90 percent in the above mentioned election. If the Great Union Party (BBP), who has 0.54 percent, joins the alliance, the total share will amount up to 62.43 percent. To consider the CHP’s alliance options, the largest party among others is the Peoples’ Democratic Party (HDP) with 10.76 percent, while the rest are as follows: The left-wing nationalist Patriotic Party (VP) with 0.25, late Bulent Ecevit’s Democratic Left Party (DSP) with 0.07, the Communist Party (KP) with 0.11, the People’s Salvation Party (HKP) with 0.18, the center-right DYP with 0.03, the Nation Party (MP) with 0.04, the Liberal Democratic Party (LDP) with 0.06, the Independent Turkey Party (BTP) with 0.11, and the Rights and Freedoms Party (HAK-PAR) with 0.23.

Excluding the HDP, the total vote share of all the above-stated parties with different ideologies amounts to 1.08 percent. Plus, there is the newly established Iyi Party chaired by former MHP member Meral Aksener. According to surveys, the party will receive around 5-6 percent from the electorate of the CHP, the MHP and the AK Party, so it can be asserted that the party will not affect the overall vote splitting. However, even though both parties retain their vote share, the CHP and the Iyi Party from the nationalist tradition are concerned about being in the same bloc with the HDP, whose public image has been tarnished due to the party’s link to the terror group PKK. In this respect, Erbakan’s party has a symbolic importance rather than its material contribution in terms of vote share since it might add an Islamic and nationalist dimension to a possible alliance. The SP, meanwhile, is feigning reluctance to both sides due to its assumed value.