The relation among the Bermuda Triangle is just like a hide-and-seek game; while veiling the image of Islam with ‘radicalism,’ it seeks this radical image in order to destroy both the authoritarian regimes in the homeland and white supremacists abroad. 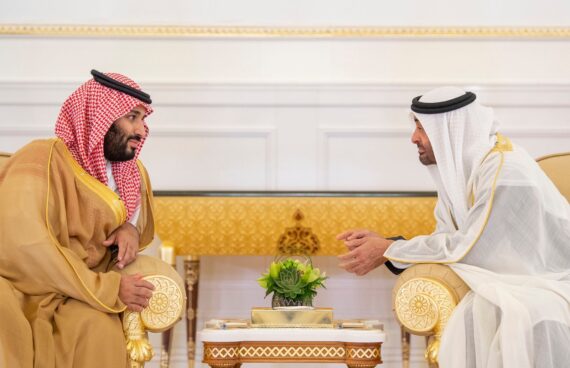 A recent article published by Foreign Policy argues that Arab regimes – particularly, Egypt, Saudi Arabia, and the UAE – are sponsoring white supremacist rhetoric in the West, and that they are doing this in the name of fighting so-called Islamists. It is argued that what these regimes are doing means to sponsor anti-Islamic sentiments in the West. The close alliance of the above-mentioned governments that form a south-bloc with the Christian Zionists and Zionists is worth noting.

The mentioned article has created considerable controversy with its bold headline and perspective. It basically argues that Arab regimes such as Egypt, Saudi Arabia and the UAE have supported right-wing groups in the West, which promotes anti-Islam bigotry. The article suggests that the reason for this support to Islamophobic groups in the West is simply to fight dissent at home and abroad towards their regimes, which are labelled as Islamist. The critiques of the article and their arguments simply state that it is ridiculous to call Muslim leaders Islamophobes, as they are only fighting the so-called radicals both in the West and at home.

A closer look at the actions of these three Arab regimes – Egypt, Saudi Arabia, and the UAE, forming a bloc in the region against Turkey, Qatar, and Iran – clearly indicates that these regimes not only contribute to anti-Muslim sentiment in the West, but that they are forming a strong alliance with Christian Zionists and Zionists under the seals of Trump and Netanyahu, at the expense of the interests of Muslims around the globe.

An article published in Foreign Policy argues that Egypt, Saudi Arabia and the UAE have supported right-wing groups in the West, which promotes anti-Islam bigotry.

It is not difficult to see the apparent strong relation between the Christian Zionists and Zionists under the leadership of Donald Trump in the U.S. and Benjamin Netanyahu in Israel – which will continue until a foreseeable future. Speaking to The New Turkey, Dr. Andrew Chesnut, Chair of Catholic Studies at Virginia Commonwealth University, said that the majority of White Evangelicals in the U.S. are Christian Zionists. He added that Pew Foundation surveys show them to be more Zionist and supportive of the Netanyahu administration than American Jews. Dr. Chesnut noted that both Secretary of State Mike Pompeo and Vice-President Mike Pence are Christian Zionist who realize their theological bent through U.S. foreign policy in the Middle East.

According to Dr. Chesnut, Christian Zionists tend to be Islamophobes, even though they make some exceptions for some Muslim nations – especially oil-rich ones that are deemed as strategic to the U.S. national interest and are beneficial to policy that is pro-Zionist. He stated that Saudi Arabia is the most important exception to Islamophobia, just as Turkey used to be.

Christian support for Zionism emerged after the Protestant reform process when the idea to support the return of Jews to Palestine was discussed among British Puritans. However, Zionism among Christians was not fully supported until early 19th century when the idea got stronger support with political motivations. After the establishment of the State of Israel in 1948, Christian support for Zionism dramatically increased. Today, a majority of Evangelicals (estimated total number of Evangelicals in the world is around 619 million) that emerged under the Protestantism form of Christianity are Christian Zionists.

Speaking to The New Turkey, Dr. Andrew Chesnut, Chair of Catholic Studies at Virginia Commonwealth University, said that the majority of White Evangelicals in the U.S. are Christian Zionists.

Speaking to The New Turkey, Dr. Ahmed Al-Burai, editor at TRT World and lecturer at Aydin University, said that the regimes of Egypt, Saudi Arabia, and the UAE are not fighting radicals. Rather, these regimes are the creators of radicalism in Islam. According to Dr. Al-Burai, what these regimes are doing is actually creating radicalization that turns into terrorism, which emerges as a result of their despotic authoritarian regimes. Once radicalism grows and is exported, they turn into ‘guardians of western values,’ in their homelands and abroad under the label of ‘moderate Islam.’ He added that some terrorist groups were mainly supported by these regimes.

When we look at the alliance between these members of the Bermuda Triangle – Zionists, Christian Zionists and the south-bloc Arab regimes – in international politics, we can see a win-win situation for both sides to promote radicalism on both sides of the equilibrium.

Radical terrorists who label themselves either Christian or Muslims are in fact two sides of the same coin.

Dr. Chestnut confirmed that the UAE, Egypt, and Saudi Arabia have undeniably forged alliances with rightist Islamophobes in the West due to their shared interests. Underlining the fact that in the particular cases of Saudi Arabia and Egypt vis-à-vis the United States, Dr. Chestnut emphasized that both regimes have been strategic allies of the U.S. for decades.

According to Dr. Chestnut, the recent attack in New Zealand is a clear indication of the equilibrium within the Triangle: radical terrorists who label themselves either Christian or Muslims are in fact two sides of the same coin. Radical terrorists who claim to fight in the name of Islam seek to provoke a war with the Christian West, while Christian white supremacists see themselves as modern day Crusaders and Knights Templar leading the charge against Islam. Radical terrorism on both sides is trying to provoke an apocalyptic ‘clash of civilizations.’

Dr. Al-Burai argues that while radicalism on the side of Islam is seeded by these Arab regimes via their despotic and suppressive rule, anti-Islamic rhetoric is justified with this radicalization process and rises in the West by both Christian Zionists and Zionists with the justification of “fighting radicalism and terrorism.” Headed by Zionist leaders of the U.S. and Israel, Al-Burai underlines that white supremacist rhetoric is attacking Islam.

According to Dr. Al-Burai, what Egypt, Saudi Arabia, and the UAE are doing is actually creating radicalization that turns into terrorism, which emerges as a result of their despotic authoritarian regimes.

Editor-in-Chief of Insight Turkey, Muhittin Ataman, argues that the current turmoil in the Middle East owes a lot to the efforts of the UAE and Saudi Arabia. The UAE-Saudi-led coalition has been suppressing the democratization process of the Arab world – first in Egypt, then in countries like Yemen, Libya, Algeria – and supporting authoritarian regimes to resume after the toppling of half a century old despotic rulers.

According to Muhittin Ataman, both regimes, together with Egypt’s Sisi, are giving support to ‘a new projection’ in the Middle East after the illegal decisions of Trump to recognize Jerusalem as the capital of Israel and the recognition of Israel’s annexation of the Golan Heights, which are both at the interests of Zionists. While Christian Zionists and Zionists are sustaining the Israeli apartheid in the ‘promised lands,’ with a 5 million Palestinian population, these Arab regimes are providing support to this projection by maintaining close ties with Israel and the U.S.

In a recent article published by The New Turkey written by Azzam Tamimi – a British Palestinian academic and political activist – clearly indicates the alliance of the Bermuda Triangle against the interest of Muslim populations. He argues: “Israel is the ally of dictatorship in the Arab world because dictatorial regimes provide it with protection and with a peace of mind.” More, he argues that the alliance between the authoritarian Arab regimes and the Zionist occupation of Palestine has never escaped the attention of the Arab masses, in which Israel was the greatest beneficiary from a situation in which despotic and corrupt elites rule the mass Arab populations.

In other words, Israel was the greatest beneficiary of denying Arabs their basic rights, including their right to democracy. It is not surprising that all parties in the alliance of the Bermuda Triangle – Christian Zionists under Trump, Zionists under Netanyahu, and the south-bloc authoritarian Arab regimes, have all been fearful of any democratic process that will reflect the will of the Arab people.

The relation among the Bermuda Triangle is just like a hide-and-seek game; while veiling the image of Islam with radicalism, it seeks this radical image in order to destroy both the authoritarian regimes in the homeland and white supremacists abroad. In other words, they are trying to destroy the monster they created. This is the fundamental principle of the Triangle.

This is indeed a win-win situation for all actors of the Triangle. For the Arab regimes, the monster justifies their despotic rule at home and prevents any democratic demands reflecting the will of Arab populations in the region. For Zionists, both Christian and Jews, it gives them the right to expand the territory of Israel by force in the lands of Palestinians, while de-humanizing and fighting the Frankenstein they created together with the Arab partners of their projection.

All parties of the Bermuda Triangle are destroying Islamic values of the bleeding Muslim societies in the Middle East and North Africa, and are now attacking them in the West with the rise of White supremacist rhetoric. Islam has invaluable contributions to the well-being of mankind but nowadays has been depicted as a Frankenstein at the hands of despotic Muslim regimes and Islamophobes around the world.