With a plethora of fingers accusing Trump of having entered office with Russian meddling in the 2016 presidential elections, his timorous forebodings of a potential Chinese interference in U.S. midterms gains new meaning. 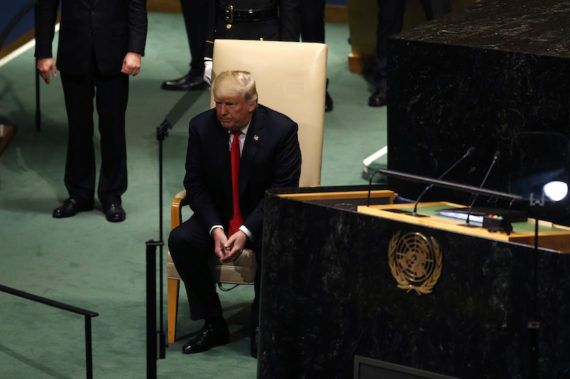 President Trump was quoted as claiming: “They do not want me or us to win because I am the first president ever to challenge China on trade,” while chairing a UN Security Council session. “We don’t want them to meddle or interfere in our upcoming election” he said.

After having waged several trade wars spanning the globe with several skirmishes including China, Canada, Iran, Mexico, the EU & Turkey several of which were devised to score points at home and play into his voter’s expectations -such as fulfilling the demands of his evangelist supporters who were influential in the tariffs imposed to Turkey over Pastor Brunson’s detainment in Turkey- Trump hasn’t been able to loot what he was expecting locally but instead his ill-advised decisions are taking a toll on US economy.

Trump had started a trade war with China in 2017 over a trade deficit with Beijing which was $375.6 Bn at the time where he blamed China with gearing its reciprocal tariffs to target a crucial artery of his voter base, farmers. The newest impact is expected to strike at the start of next week as the new 10 percent tariffs imposed on over $200 billion of imports from China are scheduled to go into effect.

Several surveys indicate that US consumers are becoming apprehensive regarding the hike in prices across all products which are expected to manifest more clearly this fall. Walmart and other leading retailers warn of price increases for manufactured goods in all categories. Many smaller businesses have started to voice their concerns over impending massive blows to their exports.

China has retaliated firmly rejecting the claim in remarks to the Security Council. Chinese Foreign Minister, Wang Yi said “We do not and will not interfere in any countries’ domestic affairs. We refuse to accept any unwarranted accusations against China, and we call upon other countries to also observe the purposes of the UN charter and not to interfere in other countries’ internal affairs.”

While the potential of China interfering in US midterms haunts Trump, it also sheds a different light, right from the source, to claims over Russian meddling of presidential elections in 2016. Will two close allies, Russia & China puppeteer the President of the country deemed as the de facto single superpower, into and out of office?