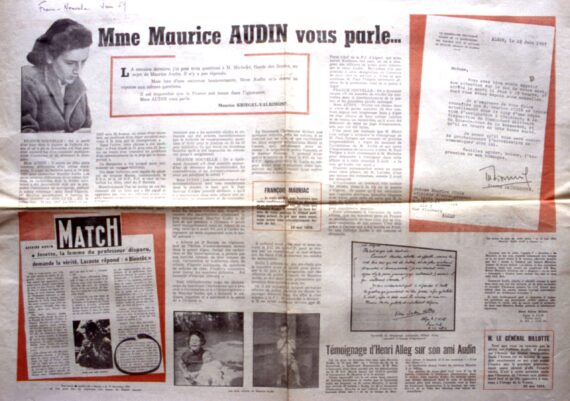 Algerian War of Independence, Testimony given by Mrs, Maurice Audin after the death of her husband, in the newspaper 'France nouvelle', Algeria, June 1959, Henri Douzon Collection. Getty Images

While it has not yet accepted that the state directly engaged in systematic torture, France has finally recognized that the French state instigated a system that led to torture during the Algerian war. The statement issued by the Elysée expressed that the French military was vested with a special authority to provide order in Algeria during the war between 1954 and 1962, which laid the groundwork of a number of atrocities, including torture.

Until 1999, Algeria’s independence war was called “Algeria incidents” in France. The Algerian war was ignored by the official state discourse. In efforts to ignore the war fought by Algeria against French colonization, the French state preferred to recognize the war as an intervention of the French forces to establish order. For years, the 130 years of French colonial presence in Algeria and the Algerian Independence War have been brought to the agenda with their various aspects. And this time, the issue of torture has been highlighted in the context of the conflict as it was 20 years ago. The subject was first opened to debate when French President Emmanuel Macron, the first French President born after the Algerian war, received a letter that was formerly sent to his predecessors but was never answered. The letter was penned by Josette Audin, the widow of Maurice Audin who sided with the independence fight of the Algerians and went missing in detainment during the war.

Audin was only 25 when he was detained in 1957. Married with three children, he was an instructor at the University of Algiers Mathematics Department. Audin was among the small number of French citizens in the country giving support to Algeria’s independence during the seven years of war although his father was assigned in the gendarmerie forces of the colonialist state. He died under torture on June 21, 1957.

Following Macron’s visit to Josette Audin, France officially recognized that Audin, a member of the Algerian Communist Party who fought for the independence of Algeria, was killed under torture by the French military officials who detained him in June, 1957. It was stated that according to President Macron, it is time for the French nation to accept the truth. It was also added that the state archives will be opened and all available information on thousands of French and Algerian civilians and military officers who went missing during the war will be revealed.

In fact, it is already known that France exercised systematic torture in Algeria, victimizing thousands of people like Audin. Sometimes, the past of a state cannot simply be ignored as past experiences leave their mark in collective memory. In the early 2000s, a former National Liberation Front (FLN) militant Louisette Ighilahriz gave an interview to Le Monde. Codenamed Lila, the militant was 20 years old when she was apprehended by the French military. In the interview, Lila said that she was not speaking to describe how she was subjected to torture for months or how her youngest brother was killed before the eyes of her mother. Her aim was to find a French military doctor named Richaud who saved her from torture. A day after her interview was published, 94-year-old Gen. Jacques Massu regretfully and abashedly made a confession. He confessed that then Defense Minister Maurice Bourgès Maunoury granted him authority to use all means to quell the terrorist activities of FLN militants and establish order in Algeria. He said: “War does not legitimize torture. Torture was not only generalized but institutionalized in Algeria. I feel devastated as I think of it.” Gen. Massu also knew the doctor Lila was searching for. He said: “Dr. Richaud was a great humanist; he unfortunately passed away a few years ago.”

The collective memory of France was stimulated with Lila’s testimonial and Massu’s confessions during the early 2000s, upon which the issues of Algeria and torture were discussed for days. It is not possible to not talk about these issues considering the 130 years of colonialist practices, inhumane treatments and the war that claimed the lives of 1.5 million Algerians. Algeria has regarded Macron’s recent step as a beginning and demanded further steps. Ighilahriz, who was tortured and raped between October 1 and December 16 in 1957 by command of Gen. Massu, is 82 today. Speaking about the latest developments, she said to French Radio RFI: “I was deeply moved. I was expecting to hear this for a long time. It was such a big trauma, but I can mourn from now on.”