During the three-day hearing in which he was tried with the demand of a 5-year prison sentence and a fine of 300.000 francs, Aussaresses said that he did not regret executing systematic torture but he regretted not doing it the way he wanted one time, adding that he felt remorse for killing someone before he spoke more although he could have pushed him to speak further. 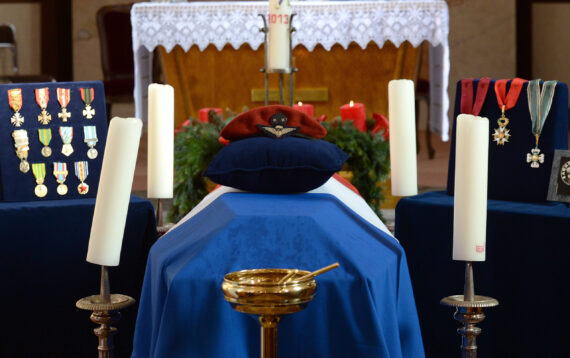 This picture taken on December 10, 2013 shows the coffin of French general Paul Aussaresses in La Vancelle, eastern France, during his funerals. Paul Aussaresses, who in 2004 was fined 7,500 euros (,200) for defending torture and had his membership of the prestigious Order of the Legion d'Honneur removed by then President Jacques Chirac, died on December 3, 2013. Getty Images

It was a few years after France recognized the responsibility of the Vichy government in the Holocaust, who collaborated with Germany under the Nazi invasion. Just as today, what leaked from the state memory regarding the issues of Algeria and torture were brought to the agenda. Today, there are still surviving witnesses of the sins of the Vichy government as well as the Algerian War.

Having apologized for the collaborating government while under invasion, France did not accept its atrocities in Algeria, which had been a French colony for 130 years, let alone apologizing for that, despite all the books unabashedly penned by the perpetrators. One of them was Paul Aussaresses, a French Army general.

Aussaresses wrote a book describing the tortures practiced during the Algerian War, presenting the details of torture methods and advocating these methods as if sharing a recipe. Published in May, 2000, the book was found abominable by everyone in France, including then President Jacques Chirac. So, he was stripped of his rank and his Légion d’Honneur following the controversies the book caused.

Undoubtedly, an apology of a crime is also a crime. In this case, however, the general was granted a legion of honor decoration while the state was informed about this very crime, but he was stripped of it when the crime became public.

So, the state attempted to vindicate itself by discrediting the general. Gen. Aussaresses’ book followed the statements of Gen. Jacques Massu, who said: “War does not legitimize torture. Torture was not only generalized but institutionalized in Algeria. I feel devastated as I think of it.” But Massu was not disgraced as Aussaresses. After all, what was accepted as a crime in this context was not the systematic state torture itself, but the blatant acclamation of torture.

As soon as the 83-year-old Aussaresses’ book was published, the Human Rights League filed a complaint against him for apology of war crimes although no war crime was manifested. The official state discourse did not even officially recognize until recently that there was a war in Algeria. According to the French state, there were only incidents necessary to establish order in the country, which was colonized for 130 years.

Following the Human Rights League, the International Federation for Human Rights filed a complaint against Aussaresses for committing a crime against humanity, and another anti-racist organization followed this. Of course, no results were obtained from the complaints, but Aussaresses was still brought to trial.

During the three-day hearing in which he was tried with the demand of a 5-year prison sentence and a fine of 300.000 francs, Aussaresses said that he did not regret executing systematic torture but he regretted not doing it the way he wanted one time, adding that he felt remorse for killing someone before he spoke more although he could have pushed him to speak further.

In his defense, Aussaresses also made an analogy with the agenda of the day and said that he did to Larbi M’Hidi exactly what they would do were they to catch Osama Bin Laden.

As can be remembered, he hung Larbi Ben M’Hidi, an important member of the FLN, with Gen. Massu and made it look like suicide. In another incident, he ordered an officer to throw FLN member Ali Boumendjel from the sixth floor of the building he was held prisoner in, claiming that Boumendjel had committed suicide.

Both before and during the trial, he asked: “Am I a criminal, a murderer?” Of course not! The laws do not categorize Aussaresses as a murderer. And he was not tried for torture, either. As Massu and Aussaresses clearly expressed, France accepted with a parliamentary vote a mission named Special Forces, which operated between 1955 and 1957.

Called “death squad” by their interlocutors, the Special Forces were authorized to use every means to reach their goals. During the trial, Aussaresses also hinted that the then Interior Minister François Mitterrand (Socialist French President between 1981 and 1995) wanted rendered all FLN militants involved in terrorism ineffective.

Besides, a law enacted in 1968 amnestied all the offenses of the French between 1954 and 1962. In his second published book, Aussaresses drew parallels between 9/11 and the Algerian War, and described himself as “a soldier who worked for France and did his job as France wants.”

On the last day of the trial, he said: “Sometimes it takes honor to digest dishonor.” So, Gen. Aussaresses was tried not for his actions, but for praising his own actions and opposing a law enacted in 1881. The publishing house which released his books was also charged with the same offense.

When Aussaresses died in 2014 at the age of 95, journalist Jean Charles Deniau, who wrote a book on mathematician Maurice Audin, said that the general did not confess everything. According to Deniau, Aussaresses knew much more than he confessed regarding Audin and thousands of others who were killed as a deterrent to others after being tortured.