A country like Germany, with its historical responsibility and its multi-cultural and multi-religious society, faces an outstanding challenge in protecting the lives of minorities. That these minorities are not played off against each other is part of this responsibility. 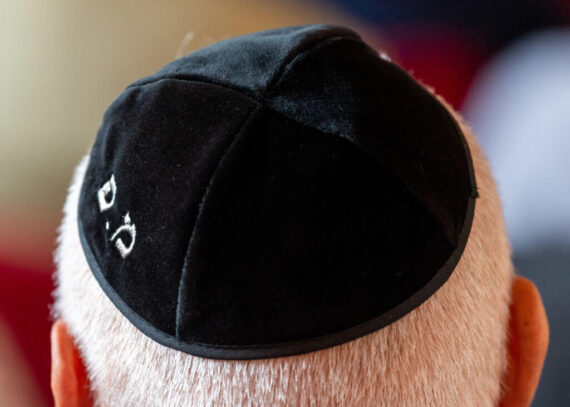 16 June 2019, Saxony, Dresden: A participant of the ceremonial inauguration of the new Tora roll for Dresden in the city hall wears a kippa. Getty Images

Germany has a pre-contaminated history with regard to the religious freedom of Jews. The centuries-old prejudices and conspiracy theories against this minority group would eventually end up with the cruel genocide, the Holocaust. Following the horrors of the persecution of Jews under the Nazi rule, the Federal Republic of Germany took over the duty of recognizing Israel unconditionally and to protect Jewish life. Since then, political education in the country has been dominated by the education about the crimes committed by the Nazis. Despite these, in Munich for example, the “capital of the NSDAP,” a document centre on Nazi crimes was not opened until 2015.

Demands for a Government Commissioner for Anti-Semitism were sporadic even before. However, the office only came into being in the course of a debate on anti-Semitism in January 2018, following an attack on a young person wearing a kippa in Berlin. The incident was filmed by the victim and attracted a lot of media attention.

In retrospect, it became known that the attacked person himself was not a Jew, but an Arab citizen of Israel, who described his wearing of the kippa as an “experiment”. The attacker stated in court that he had previously been insulted and provoked by the victim in an anti-Arab manner. The 19-year-old Syrian was sentenced to four weeks imprisonment under juvenile criminal law.

There is no doubt that there is a widespread hostility among Arabs and Muslims towards the State of Israel, which can also lead to hostility towards Jews in general. In Germany, however, the phenomenon is very rarely researched and statistically not clearly verifiable.

Is the danger for Jews growing in Germany? Equally important, from whom actually does the danger emanate?

After the anti-Semitism commissioner Felix Klein, an experienced lawyer and diplomat who is not Jewish himself, warned against wearing the kippa in May 2019, a public debate broke out which again featured anti-Semitism by migrants prominently. Klein said literally, “I cannot recommend that Jews wear the kippa anywhere in Germany at any time. Unfortunately, I have to say that.” It is a statement that can at first be understood as an example of cold German diplomacy. It is an inconvenient statement. And as such it was also critically discussed. The prominent Jewish publicist Michel Friedmann reacted indignantly to the statement. According to him, it was a failure of the state not to be able to guarantee security and to openly admit this.

The chairman of the Central Council of Jews, Josef Schuster, on the other hand, regards the statement as a necessary indication of a problem that Jews want to see discussed. “It is therefore to be welcomed if this situation also receives more attention at the highest political level”. The fight against anti-Semitism must be adopted by the whole society, he stressed. “It is about time.” He affirmed that it is indeed not certain for Jews in some parts of Germany to be recognizable as Jews. In 2015, Josef Schuster also mentioned districts with a majority of muslim residents. The term “No-Go-Areas” developed. As such, regions in East Germany were also discussed in which right-wing extremist positions are widely represented

Is the danger for Jews growing and from whom does the danger actually emanate? The later is indeed difficult to determine. The annual statistics of the Federal Criminal Police Office (BKA) recorded an increase in anti-Semitic crimes by 20% to about 1,800 crimes. Also in general the number of hatecrimes, including racist and islamophobic hatecrimes rose. According to the statistics, 90% of crimes against Jews were committed by right-wing extremists and only a fraction were committed by foreign or religious ideologies that are not further defined.

Anti-Jewish tradition of the West did not disappear

An EU-wide survey found that a majority of Jews were more likely to perceive anti-Semitism by immigrants. This is often used as an argument by “Islam critics”. However, it should be mentioned that this is not a scientific study, but a survey of perception. It should be discussed to what extent the questionable high media and political focus on “imported anti-Semitism” may contribute to a distorted perception.

Contemporary anti-Semitism in Germany is a rarely researched phenomenon.

Josef Schuster, who repeatedly spoke out clearly against Islamophobia and racism in general, explicitly addresses the “aggressive political climate” when he discusses the causes of the growing hatred against Jews.

One must probably also ask the question to what extent the strengthening of the right-wing populist party AfD has contributed to this climate. After all, it is politicians of that party who regularly relativize the crimes of the Nazis. Alexander Gauland, one of the party’s leaders, described the Nazi era as “a shit of a bird in 1000 years of German history”. For critics, this is a clear downplaying of the deeply rooted anti-Semitism in German nationalism.

The AfD politician Wolfgang Gedeon wrote in one of his books: “As Islam was the external enemy, so the Talmudic ghetto Jews were the internal enemy of the Christian West”.

And this is an interesting narrative. Right-wing populists, whether in Germany, Austria or France, are trying to instrumentalize a supposed danger by Muslims at the same time. Apart from such clearly anti-Semitic statements, this often happens by ascribing the responsibility for anti-Semitism specifically to Muslims or immigrants and by washing away one’s own nationalism, which is historically as well as currently sociologically clear breeding ground for anti-Semitism.

The Jewish author and liberal Rabbi Armin Langer sees this as a systematic approach and opposes the thesis of “imported anti-Semitism”. “Anti-Semitism does not need to be imported because it has always been here. The centuries-old Christian anti-Jewish tradition of the West did not disappear even after the Holocaust,” he writes in SPIEGEL. Langer is also explicitly critical of the narrative that there is a traditional “Christian Jewish Occident”.  According to him, serving such a narrative is historically wrong, negates anti-Semitism throughout and aims to exclude Muslims from the idea of Europe.

After the attack on the Kippa bearer in Berlin in 2018 and after Felix Klein’s warning, there were nationwide solidarity campaigns with Jews in which society was called upon to demonstratively wear Kippa. High-ranking politicians and public figures took part. BILD offered cut-out kippas in its newspaper. Armin Langer also takes a critical view of this.  “Solidarity with Jews and resistance against anti-Semitism is to be welcomed, but the Kippa is not suitable as a symbol for it”, he wrote on Facebook. This garment stands for the expression of one’s own Jewish faith.

The Kippa is not a “neutral” symbol of German democracy, he explains. “Moreover, in our German context we should also consider the aspect of cultural appropriation: Especially among the successors of perpetrators, it is common to appropriate the cultural characteristics of formerly oppressed minorities and deprive them of their original meaning.” Instead, he recommends showing solidarity in a different way, e.g. by supporting prevention work.

The AfD politician Wolfgang Gedeon wrote: “As Islam was the external enemy, so the Talmudic ghetto Jews were the internal enemy of the Christian West”.

The Central Council of Jews, on the other hand, welcomed the actions. There was also clear solidarity from the Muslim side. The chairman of the Central Council of Muslims, Aiman Mazyek, stressed that standing up for anti-human hostility of any kind, including explicitly anti-Semitism, was one of the deepest Muslim convictions.

A country like Germany, with its historical responsibility and its multi-cultural and multi-religious society, faces an outstanding challenge in protecting the lives of minorities. That these minorities are not played off against each other is part of this responsibility.

Tarek Baé studied media and communication studies in Freie Universität Berlin (Germany) and University of Leicester (United Kingdom). He was editor-in-chief of the Islamische Zeitung until 2018. Baé is a renowned expert in the field of media in Germany and Europe, especially media in relation to Muslims. His area of research also focuses on media issues and minorities in Europe. He is fluent in German, Arabic and English. Currently, Baé is working as a Research Assistant at SETA Berlin.