The Jameel Prize is ‘an award for contemporary art and design inspired by Islamic tradition’ and is currently on view at the V and A Museum until November 25, 2018. This is the fifth edition of the award and exhibition, which is organized by the Victoria and Albert Museum in London and the organization Art Jameel.

This is the 5th edition of the Jameel Prize, which is awarded annually to a shortlist of artists who use ‘contemporary art and design inspired by Islamic tradition.’ The 2018 exhibition is back at the V and A Museum in London after the last event took place at Pera Museum in Istanbul (2016). The exhibition is prominent (to the left of the main entrance after you walk in) and is usually teeming with people. Being a historical Museum filled with the wonders of the world from everyday objects to intricate costumes and ornate works of art the viewer may be accustomed to soaking in innumerable works in finite rooms. However, the cramped location of the Jameel Prize would be better served by a larger and better installed space that would allow the viewer to ‘breathe’ and meditate on this art in a more contemporary context (something which felt more successful at the last edition at Pera- which is also a historical, albeit smaller, Museum). As one enters the exhibition a massive video monitor seduces many of the visitors (with benches nearby) and gives a 20-minute overview of each of the shortlisted artists which is both informative and well-produced but which tends to overshadow the actual work in both its prominence of place and scale. 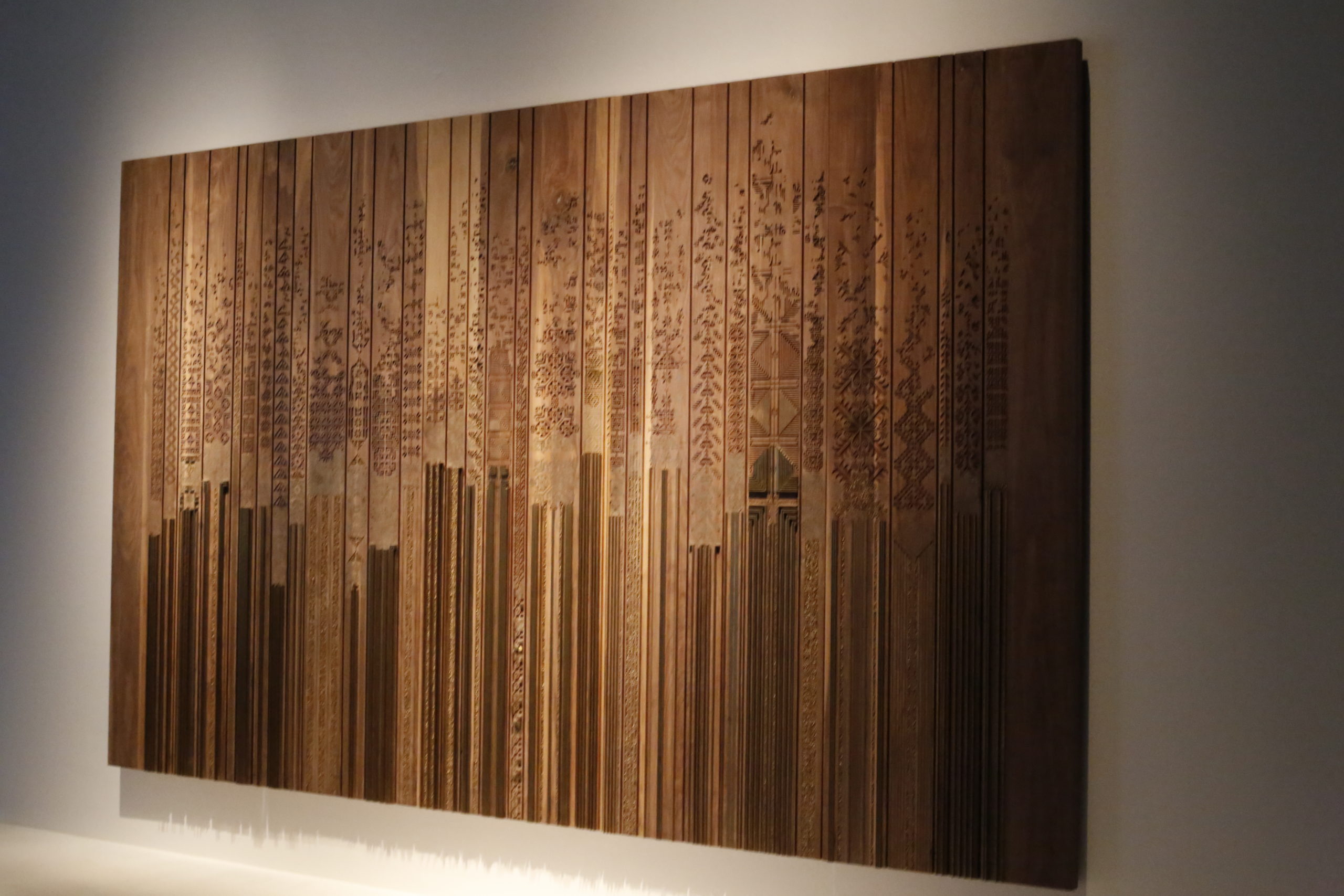 And the winner is…

The world is (and has been for a long time) about lists of the best and winners and losers – sports culture is the perfect example of how the drama can be sustained, written about and marketed on a near continuous basis. Art on the other hand should be about an experience of contemplation, adventure, discomfort or even shock (or all of the mentioned and more) and the relevance of a ‘winner’ has to be questioned since there can be several works that are strong without having to choose a clear winner and loser. It should also be noted that as time passes, few people remember the winners at awards ceremonies but rather the great films, books and art that have been created over the last century. Mehdi Moutashar and Marina Tabassum were declared co-winners by the jury for this years’ prize.

Moutashar (b. 1943, Iraq – lives and works in Arles, France) is a veteran artist who in some ways feels like a ‘safe’ choice. Many modern artists (masters such as Klee, Matisse and Mondrian) were influenced by Islamic Geometric patterns and Moutahar’s work is reminiscent of early Malevich or the 1960s hard-edged, minimalist abstract painters such as Rothko or Elizabeth Murray with some added sculptural elements. In the biographical film he discusses the orientalist discourse he encountered when a student in 1960s Baghdad. However true this may be (and it certainly still happens) it feels very distant and out of step with the discussions going on today.

Tabassum (b. 1969 Bangladesh – lives and works in Dhaka, Bangladesh) is an architect and heads her own architecture firm that is interested in ‘climate, materials, site, culture and local history.’ Her use of light and materials brings to mind the legacy of Louis Khan’s work in Bangladesh (and a number of architects who have been influenced by his aesthetic). The Bait ur Rouf Mosque (2012) she designed places airflow (and the need for a building that breathes the humidity of Dhaka) alongside the creation of a minimalist sacred space of beauty. The curious observations are why is an architect’s building included in an Art competition; not because the two don’t overlap and mix but more because it is a completed building (that is six years old) and is represented by a scale model and photograph. An installation would make more sense since the viewer cannot experience, interact or appreciate a building or Tabassum’s interesting solutions to light, airflow and sacred space in this exhibition. 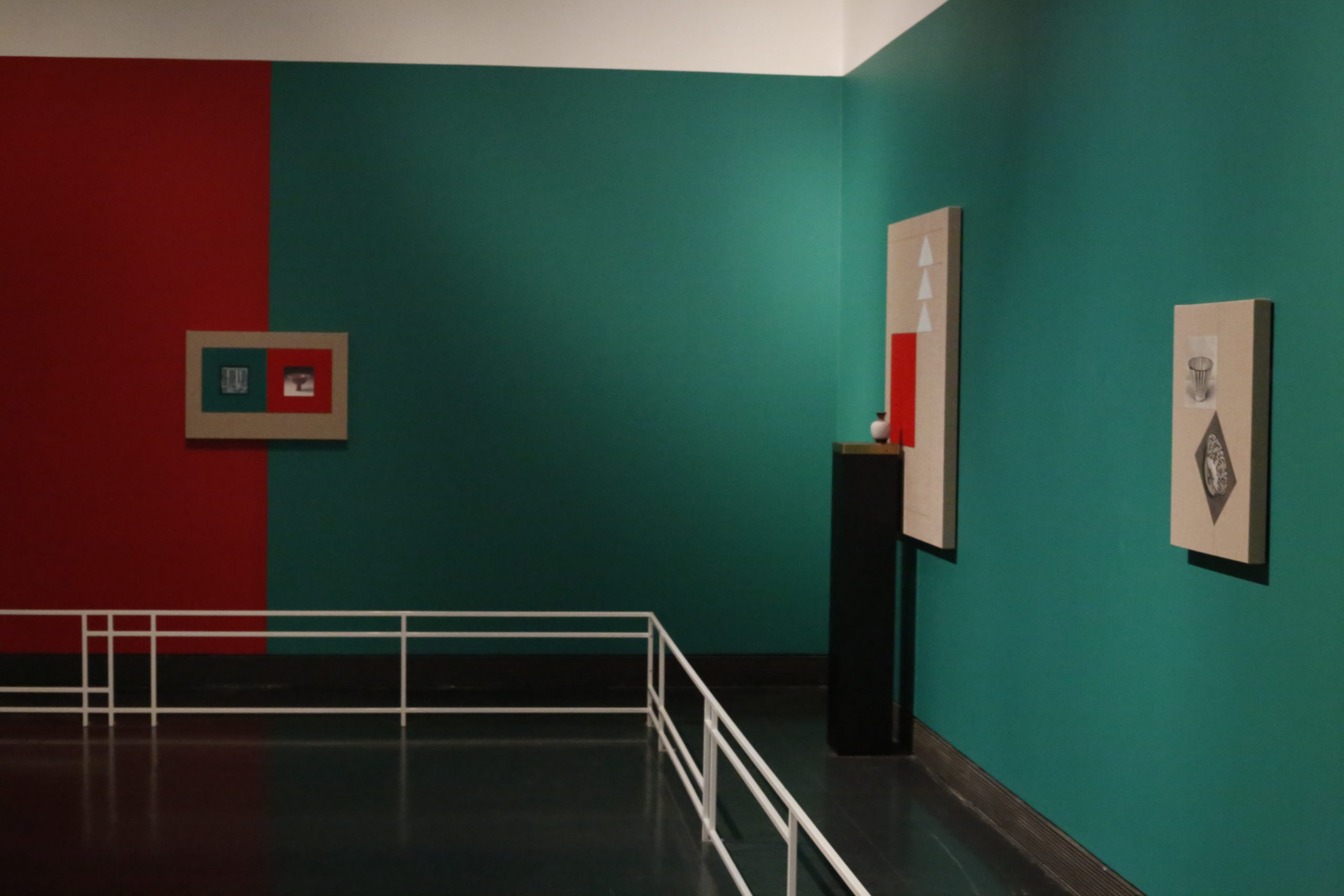 Some of the artists included have work which lack some of the sophistication and conceptually rigorous strands of the cutting-edge in contemporary Islamic Art. Instead their inclusion feels forced as part of a curatorial ‘balance’ of gender/youth.

Hayv Kahraman (b. 1981, Iraq- lives and works in Los Angeles, U.S.) uses poetry to express a feminist discourse in her biographical video about her practise. The paintings use an interesting formal approach with a series of physical collages using wooden panels – the trouble is the repeated rendering of miniature-inspired self-portrait styled women feels underdeveloped both technically and conceptually. A disconnect between the poetry of identity, the use of a miniature aesthetic and the physicality of the display exists.

Hala Kaiksow (b. 1990- lives and works in Manama, Bahrain) has created a garment that appropriates Berber women with a contemporary fashion slant. She works with ‘traditional’ weavers and discusses process and the craft-based details extensively. The garments look similar to much of the fashion world over the past decade or more (many works like this could be seen in the early 2000’s in the NIFT fashion colleges of India). The work lacks a contemporary conceptual drive and tries to make up for it with a lazy ‘post-feminist’ slant that doesn’t seem convincing.

Wardha Shabbir (b. 1987, Pakistan- lives and works in Lahore, Pakistan) is another artist from the National College of Arts in Lahore. As stated in the biographical video many successful and cutting edge artists have emerged from this institution over the last few decades and several representative examples have featured in the Jameel Prize over the years (including last years’ winner Ghulam Mohammad). Shabbir invokes a minimalist aesthetic while borrowing from traditional miniature painting technique and is interested in light and temperature (and the scorching heat); the problem is Shabbir’s work feels underdeveloped in comparison to other NCA alumni and her discussion of future projects and where the work may go (installation?) prove more compelling than what the viewer is actually left with. 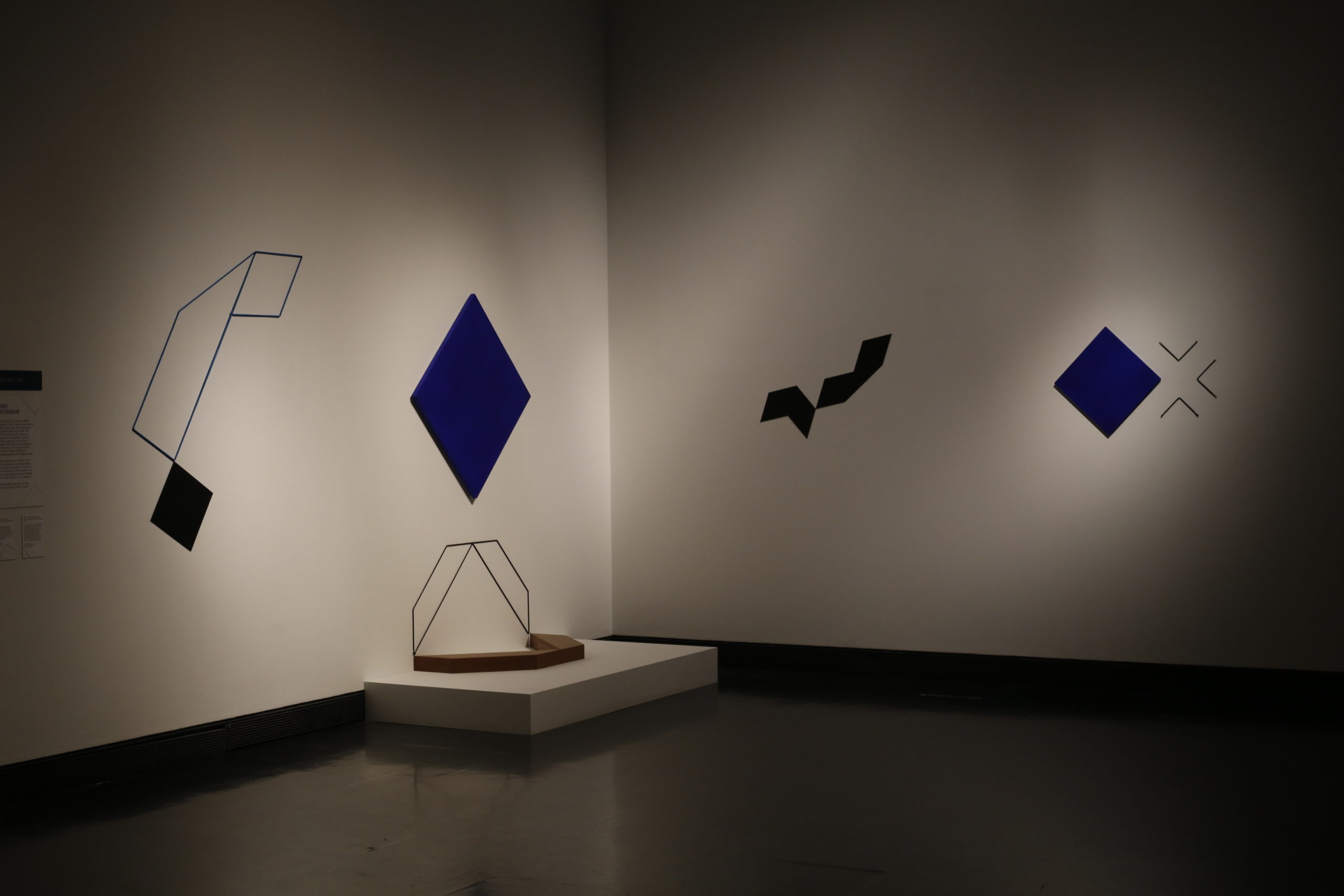 Two squares, one of them framed, 2017 mixed media installation by Mehdi Moutashar

The strongest works in the exhibition are those that rigorously explore Islamic artistic traditions while bringing something new in terms of material and concept.

The Naqsh Collective consists of Nermeen Abudail (b. 1980, Jordan) and Nisreen Abudail (b. 1976, Jordan). Nermeen has a background in graphic design and Nisreen is an architect and the work they have collaborated on takes the delicacy of embroidery and places a textured sculptural durability within a large scale. The artists let the materials speak while also respecting and researching the tradition.

Kamrooz Aram (b. 1978, Iran – lives and works in New York City, U.S.) displays fragments that have an architectural quality to them. The juxtaposition of historical pieces with modernist, geometrical canvases and sculptural stands lets the viewer re-interpret how one should approach ‘Islamic Art’ in a Museum context. His approach is to ‘look at objects as contemporary objects’ and these ideas are at the core of the entire Modernist view and interpretation of Islamic Art and are a welcome perspective from a visual artist.

Younes Rahmoun (b. 1975, Morocco – lives and works in Tetouan, Morocco) presents a compelling work titled Tâqiya-Nôr (Hat-light) from 2016. The illumination creates a sublime feeling and effortlessly mixes new technology with the Sufi object (the head-gear) while touching on Islamic numerology (the prime number) and the ubiquity of repetition in Islamic Art and Architecture. He remarks in the biographical video ‘…7 and 3- I love these numbers…’ and he also draws from a large, generalized aesthetic and simultaneously creates something that comes specifically from his hometown of Tetouan (he reflects that ‘the medina is my house’). These admirable qualities become transcendental with the inclusion of light and a contemporary use of space and media make it the best example in Jameel Prize 5 of the possibilities for Contemporary Islamic Art.