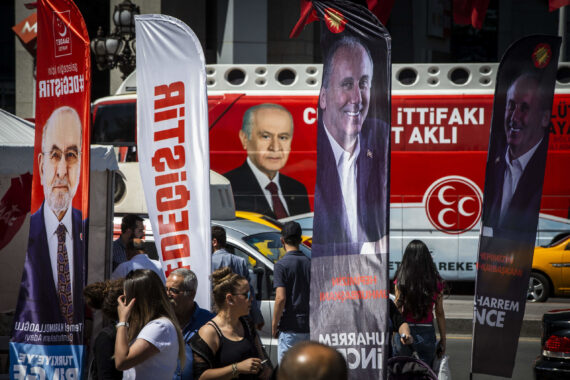 Campaign posters of presidential candidates and flags of parties are seen at Kizilay square in Ankara, Turkey on June 13, 2018. Anadolu Agency

In the past couple of days, Turkey’s political agenda has mainly been shaped by the upcoming local elections scheduled for March 2019. Understanding the importance of the local elections from a foreign point of view might be difficult if one disregards some crucial points. Although there is still over four months until election day, it won’t be wrong to focus on the main dynamics of the upcoming elections in Turkey.

The local elections planned to be held on 31 March, 2019, will be the first elections subsequent to the final establishment of the Turkish presidential system on 24 June, 2018. The previous local elections in all 81 provinces of Turkey were held in March 2014 when besides the mayors of the Turkish provinces, all other leading local offices had been elected as well. Furthermore, the 2014 local elections symbolized a key importance due to the prior judicial coup attempts by FETO members, who infiltrated the Turkish judiciary for over years.

Despite several moves and FETO-related – or manipulated – media supported campaigns, Turkish citizens did not accept a tutelage-like scenario by FETO and thus the ruling AK Party, led by then Prime Minister Erdogan, won the local elections without any heavy losses. Actually, this day could be thought of the acceleration day of the end of FETO, which even in this subsequent process tried to execute a bloody coup on 15 July, 2016, which also failed due to the people’s will that prevented the putschists.

After re-joining the party, President Erdogan, who was once the Mayor of Istanbul, pushed for reform within the local cadres of the AK Party.

In regards to the 31 March, 2019, local elections, there are some important points that have been taken into account by both the AK Party and the MHP. As one remembers, both parties had created an alliance during the 24 June presidential and parliamentary elections, which symbolized Turkey’s ultimate switch to a new system of government. Interestingly, despite some disagreements in the afterward concerning some certain policy issues, it became clear last week that both parties will once again cooperate during the local elections – this time in a limited range but still covering Turkey’s three provinces with the highest population. Thus, this time the alliance will focus on certain cities such as Istanbul, Ankara, and Izmir. It has to be stressed that approximately 25 million of Turkey’s total – 81 million – population, live in these three cities.

Following this path, during his speech on Saturday, MHP leader Devlet Bahceli stated, “No matter who the Justice and Development Party nominates in the three biggest provinces, we will provide full support. There has been no bargain, collusion or give-and-take in making our decision.” Bahceli also added by addressing the continuing importance of the presidential system while stating “Whoever aims to destroy the presidential system will find us standing against them. This is about the People’s Alliance, the presidential system and the composition of local administrations in line with that.”

Highlighting his support for an alliance during the local elections in Turkey next year, MHP chair Devlet Bahceli stated, “Whoever aims to destroy the presidential system will find us standing against them. This is about the People’s Alliance, the presidential system and the composition of local administrations in line with that.”

On the other hand, the AK Party, actually began the renewal of its local cadres in 2017 when President Erdogan was able to re-join the party after the constitutional ban. On the day he was able to join the party, President Erdogan stated, “We will update all of our provincial, district and town organizations by the end of the year (2017) because there is a fatigue. We have to overcome this. With more dynamic teams, we have to prepare for 2019 [elections].”

It was no surprise that once again Erdogan himself, who was the mayor of Istanbul between 1994-1998, had realized the urgent need for certain reforms within the AK Party with regard to the upcoming local elections.

By elaborating on the motivation of the opposition parties regarding the local elections, one should particularly keep in mind that the main opposition party, the CHP, is once again seeking some rationality absent alliances, as it had tried during the 24 June elections by bringing together all opposition parties under the same umbrella. By this, the CHP, aims to come together with the conservative Saadet Party, secular-nationalist Iyi Party and is trying to find other ways to cooperate with the Kurdish nationalist HDP. But whether these ambivalent moves will find a reflection and positive reaction among the CHP constituent is another question. The main point all opposition parties share is the rejection of the newly established presidential system. If the opposition parties gain any success in major cities such as Istanbul or Ankara, they will most probably trigger a questioning of the legitimacy of the presidential system.

In addition, and interestingly, Kemal Kilicdaroglu – the CHP chair – who has lost 9 elections since he became the party’s leader in 2010, still insists on keeping his position and has ignored harsh calls made by close party circles for him to step down by actively preventing party conventions. Moreover, the party’s presidential candidate during the June 24 elections and potential new chairperson of the CHP, Muharrem Ince, is testing for new opportunities in order to achieve his main purpose to become the successor of Kilicdaroglu. For this, he currently seems to have a new short-term strategy, namely, becoming the CHP’s candidate in Istanbul. Whether this will happen and what Kilicdaroglu is planning will become clearer in the upcoming weeks.

Kemal Kilicdaroglu – the CHP chair – who has lost 9 elections since he became the party’s leader in 2010, still insists on keeping his position and has ignored harsh calls made by close party circles for him to step down by actively preventing party conventions.

Also Read
Who did Kemal Kilicdaroglu Want to Please with his Germany Visit?