A report published by the SETA Foundation aims to be of use to individuals responsible for combating FETO infiltration to provide insight into the strategies they employed throughout their decades long insidious permeation into key government institutions. 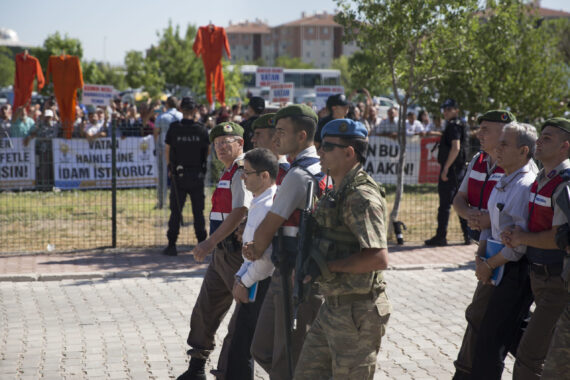 A report has been published by SETA on the confessions of FETO (Fetullah Gulen Terrorist Organization) members and affiliates regarding their infiltration strategies into the Turkish government. The report notes that the interval between 1962 and 1980 was the incubation period of FETO where it recruited new members, started institutionalizing and took its first steps towards permeating into government apparatuses. Between 1980 and 1999 FETO continued spreading via a façade of “moderate Islam” which it dedicatedly kept up. During the late 1990s, FETO started using educational institutions to increase its global outreach. Between 1999 and 2012, FETO is known to have persevered FETO’s unbeknownst tutelage hold on the government. Seeing themselves above and beyond all moral codes of ethics and religious values, FETO has justified all means of threats, blackmail, extortion, and plots to meet their ends.

The first and foremost goal of FETO “was to accumulate as many affiliates as possible into strategic institutions and use their network to promote these individuals as higher up as possible in the organizational ranks” the report highlights. Confessions reveal that FETO especially prioritized staunchly permeating strategic departments such as HR, IT, private secretary office, intelligence, accounting and training.  FETO is known to have seized hold of training centers that train future candidates to these strategic institutions such as the TSK (Turkish Armed Forces – TAF) and the Police force.

In a television program aired in 1999, Fetullah Gulen manifests his underlying motive: “We must ceaselessly get prepared. When we find the opportune vacancy, we will start the marathon. We must be cautious. If we act rash, they will eradicate us. By taking this into account, we must be taking our steps cautiously.” The report recounts that FETO’s ceaseless efforts paid off significantly in the 1990s when the terror group had finally managed to permeate into all levels of all the government institutions. Since 2012 its primary aim has been the overthrowing of the government.

FETO has always prioritized strategic institutions in its infiltration strategy, and has stolen various entrance examination questions via these institutions, tapped into the phones of key individuals, and manipulated trials by forging documents and generating fake evidence.

By exploiting economically poor and clever children at a young age, distancing from their families for long intervals and effectively adopting them “as his children” FETO literally subjected the children to emotional manipulation through various means such as melodramatic shows of poignant lectures distributed via video cassettes to “light houses”, the place of residence where these children continued being indoctrinated the report highlights. After discovering the power of media, FETO started publishing Sızıntı magazine, a double entendre that literally and ironically means “infiltration.”

The report notes how FETO polished affiliate candidates and gave them a head start in the competition for specific positions via exclusive opportunities such as scholarships, masters programs and paid international experience. The report further highlights how FETO tried to enervate and drive out non-affiliate members from the institutions by mobbing, running slander campaigns, collective pressurizing and by forcing them to resign to gain an overall control of the institution. The report notes that whilst only 400 FETO affiliates were ousted from TSK over decades, over 1500 individuals were thrown out on “irtica charges” (in reference to individuals who were found to be prominently religious in a setting which tends to be overtly secular).

There is a striking similarity in the way the entrance examination questions were serviced in advance to FETO-affiliate candidates in all the institutions according to the accounts of FETO affiliates highlighted in the report. Several examples showcased in the report cited candidate confessions during interrogations who said that they “were given the questions via an abi (elder brother in reference to their immediate mentor”) with a code name and given 15 minutes to memorize all the questions and answers and were cautioned not to exhibit surprised facial expressions when seeing the same questions in the actual exams, to wait until the end of the allotted exam time, never to say that the “exam went well” following the examination, and not to talk about their encounter with anyone and never to re-contact them again.”

In the confessions of some FETO affiliates who had a strong hand in the police force they described how the drawing of lots for the determination of the district of operation of fellow policemen were fraudulent with two divisions inconspicuously placed in the bags from which the draws were being made to ensure that the locations for FETO affiliate policemen were always drawn from the section that had the strategic locations. Similarly, in the selection process of candidates for the General Directorate of Kars Police Force, one FETO affiliate confesses how a FETO affiliate vice chancellor of the Police Academy present during candidate interviews raised a red pen if the candidate was to be subjected to psychological pressure and difficult questions by the jury and a green pen for easy questions directed to FETO affiliates to smooth the interview process and eliminate non-FETO affiliates from the pool of contenders.

License to sin and transfer of bad deeds to Fetullah Gulen

Tabip Albay confesses the following: “Şemsettin took me to the dormitories where Fetullah Gulen was residing. Gulen said: “You have undertaken a noble mission, do not make yourself evident and implement your tasks diligently. To hide yourself, you can drink alcohol, it won’t be haram. If your wife is covered you can uncover her hair, it won’t be haram. Even if it is, I will take the responsibility of the deed. Since this cause is great, it won’t be haram. Earn new members and stand out in your work. If you reach the necessary positions, our cause will be achieved.”

The report also notes an imam in military high schools who confessed that Gulen advised that after a rigorous religious education, to keep their identity confidential that they should act like “Italian artists in the morning.” A similar account in the report notes members of the judicial system who were advised “to refrain from fasting or to walk around with a water bottle in Ramadan, to refrain from going to Friday prayers, drink in public if necessary to hide their identities.”

At OSYM it was realized that from the tea servers to the technicians of the institutions, FETO had seized all ranks of the hierarchy. The report notes that “their university entrance examination prep centers always had similar questions to the official exam since they were funneling questions right from the source.” To facilitate mass staffing they ensured that questions from their prep centers were also included in the official exam.

When there was an extraordinary success rate at the proficiency exam for academicians, ALES, it was realized that FETO had been stealing the questions for this exam as well. “It was realized that the computers storing the questions were exploited and the security surrounding these computers were breached both physically and through cyber-attacks and that FETO affiliates had established virtual servers in computers.” Via these virtual servers, it was deduced that FETO was able to access many questions.

The report also notes that FETO infiltrated the information technology infrastructure of Turkey, utilizing many means to forge evidence, wiretap key officials and access confidential government archives. In TUBITAK many meritless FETO affiliates gained a stronghold and wiretapped non-affiliates to push them out of the cadre. It was realized that the code of the encrypted phones used by government officials were obtained by FETO affiliates and used to slight the phones and wiretap them. The report also notes that FETO affiliates manipulated the interrogation of the kozmik oda (cosmic chamber), military espionage cases, Balyoz and Ergenekon cases since they were in charge of assessing evidence for these cases.

This report aims to be of use to individuals responsible for combating FETO infiltration to provide insight into the strategies they employed throughout their decades long insidious permeation into key government institutions. It is of essence that their true colors be manifested continuously to gain public support in the fight against this sinister organization, enlighten and raise overall awareness on an organization that has cost significantly to the Turkish people and continues to pose a threat to the international community in its various strongholds and areas of influence which are still in the process of being divulged due to their systematic, deeply ingrained and covert natures.