On Thursday the Turkish Central Bank announced that the central banks of Turkey and Qatar signed a memorandum of understanding to develop bilateral cooperation in Qatar’s capital, Doha. 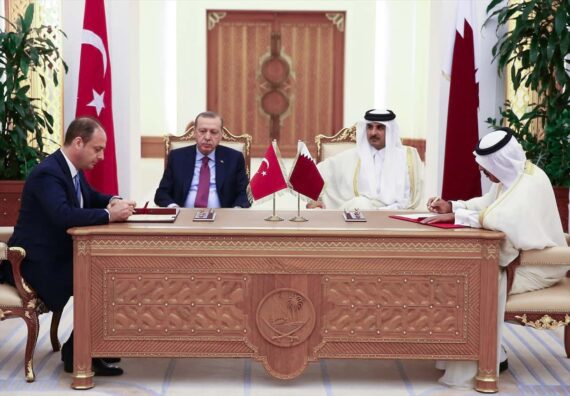 Governor of the Central Bank of Turkey Murat Cetinkaya (L) signs an agreement on behalf of Turkey as he is flanked by President of Turkey Recep Tayyip Erdogan (2nd L) and Emir of Qatar Sheikh Tamim bin Hamad Al Thani (2nd R) in Doha, Qatar on November 15, 2017. Anadolu Agency

During Turkish President Recep Tayyip Erdogan’s visit to Qatar, bilateral agreements were made between the two countries in a variety of areas including tourism, law, meteorology, agriculture, food, media, science and humanitarian aid.

On Thursday the Turkish Central Bank announced that the central banks of Turkey and Qatar signed a memorandum of understanding to develop bilateral cooperation in Qatar’s capital, Doha.

In a written statement the bank informed that the pact was signed by Murat Cetinkaya, the Turkish bank governor and Sheikh Abdulla Bin Saoud Al-Thani, the Qatari governor, under the auspices of visiting President Erdogan and Qatari Emir Tamim bin Hamad Al-Thani.

The bank explained that the Turkish Central Bank signs such pacts “with foreign central banks in the framework of its strategic objective of improving international relations by developing bilateral relations.”

The statement also added that to this date the bank has signed a memorandum of understanding with 25 foreign central banks.