Could the US Save the Raqqa Operation Through Intense Airstrikes?

Despite huge American support, PKK-affiliated YPG forces are trying hard to take Raqqa from DAESH. After the quick withdrawal of DAESH from the Raqqa countryside, their resistance against the US-backed YPG is strong. 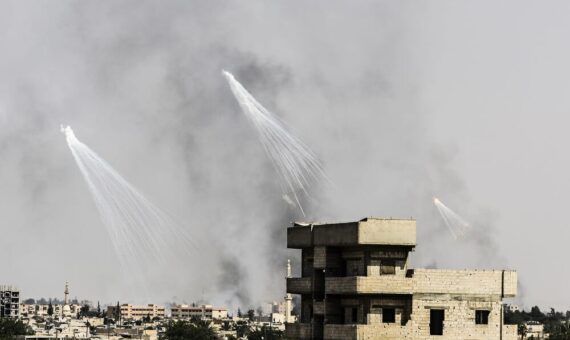 Despite huge American support, PKK-affiliated YPG forces are trying hard to take Raqqa from DAESH. After the quick withdrawal of DAESH from the Raqqa countryside, their resistance against the US-backed YPG is strong. It seems like the YPG is scrambling to take over the city unlike the Manbij experience. Therefore, the US-led international coalition is massively bombing the city, but DAESH has heavily fortified itself inside.

Ineffectiveness of the YPG in Raqqa and DAESH Resistance

On June 6, the YPG-led Syrian Democratic Forces (SDF) announced the start of the Raqqa operation. Even if the list of participants was long, the main force in the operation are the PKK-affiliated YPG. Thuwwar al-Raqqa, which is the only brigade in the region which once governed Raqqa city and fought at Ayn al-Arab (Kobane) alongside the YPG against DAESH, has been excluded from the Raqqa operation, which has resulted in a lack of local support for the operation. Also, the Arab Quwwat al-Nukhba brigade (The Elite Forces) of Jarba was forced out of the Raqqa operation. Both brigades were forced out for the same reason: they weren’t obeying YPG orders. The number of Arabs within the YPG-led Syrian Democratic Forces was already low and with the exclusion of these two bigger brigades, it became even less than it was before.

The low number of Arabs in the ranks of the SDF and the exclusion of the only brigade in the region with governing-experience in Raqqa led to a lack of local support for the Raqqa campaign. Due to a lack of local support, it was certain that the operation will lack intelligence and insightful information which is important in urban fighting. Nevertheless, the huge US-support for the operation in terms of weapon supplies, military training, supervision and air support in the face of current DAESH-weakness led to estimates that DAESH will soon collapse in Raqqa. But it has been otherwise.

The YPG forces are apparently inefficient and have low fighting moral and discipline. DAESH on the other hand is still using their Suicide Vehicle Borne IEDs (Improvised Explosive Devices) and other forms of suicide attacks which is completely inhumane, but it shows their fighting moral. In addition to suicide attacks, DAESH is heavily reliant on snipers. In DAESH propaganda videos, they show how their snipers kill YPG forces, smoking cigarettes on terraces. Despite long and systematic US-training for the YPG-led SDF, the fighters are lacking basic knowledge in urban warfare.

Facing the ineffectiveness of the YPG, the US-led International Coalition is massively bombarding Raqqa. The bombardment is so intense that geolocation with DAESH propaganda videos became impossible. Not only DAESH propaganda videos, but also CENTCOM press releases show the huge destruction of Raqqa. Since the start of the operation, the US-led International Coalition has struck Raqqa 1,606 times in 68 days. That’s an average of 24 strikes per day. Compared to 5 strikes per day in Mosul in May 2017, the airstrikes are incredibly frequent. If one also compares the scales of Mosul and Raqqa, the intensity of airstrikes will become more visible. Or one can also compare the number of airstrikes to the number of Turkish airstrikes at the beginning of the Euphrates Shield Operation which was 211 in 66 days, or 3 strikes per day.

The Future of Raqqa after the defeat of DAESH

The decision by the US-administration to start the Raqqa operation with the PKK-affiliated YPG-forces instead of the Turkish-backed Free Syrian Army seems to be a huge mistake, which will be clearer after the defeat of DAESH. This choice also increases the costs of the operation enormously, and makes it harder for President Trump to explain the undertaking to the U.S. public.

Compared to the operation to take Al-Bab, which was captured by Turkish-backed FSA forces and only partially destroyed in some western neighborhoods, Raqqa is being completely wiped out by airstrikes. Due to the lack of local support, which would be available if the Raqqa operation was conducted by the Syrian Arab rebels, and the ineffectiveness of the YPG in fighting in Arab areas, the US-led International Coalition is forced to wipe out Raqqa with airstrikes. Now, the rebuilding of Raqqa without the support of Turkey, which shares a long border with Raqqa province, will become very difficult.

Furthermore, the extremist-leftist ideology of the YPG and their ethnic Kurdish-identity are two main reasons why the Raqqa population sees them as a ‘foreign power’ which will occupy the city much like DAESH did for years. The YPG experience against factions like Thuwwar al-Raqqa which did not obey YPG orders is known. The leader of the brigade who fought in Ayn al-Arab (Kobane) is now under house-arrest by the YPG. In addition, Kurdish opposition parties like ENKS were systematically suppressed by the YPG. Therefore, the question of how Raqqa will be governed and rebuilt after it is destroyed remains unanswered. Claims of a US-Russian agreement of handing over the city to the Assad regime after the defeat of DAESH, seem for the time being unlikely, but not impossible either. If this happens, it will be the result of the unwise decision made by the US in Raqqa, when it preferred to work with the PKK-affiliated YPG forces instead of their NATO ally Turkey and the Free Syrian Army.