The looting and subsequent disappearance of artistic treasures from the African continent had two detrimental outcomes: the loss of national and personal identity and cultural heritage; and their potential contribution to African economies through artistic tourism. 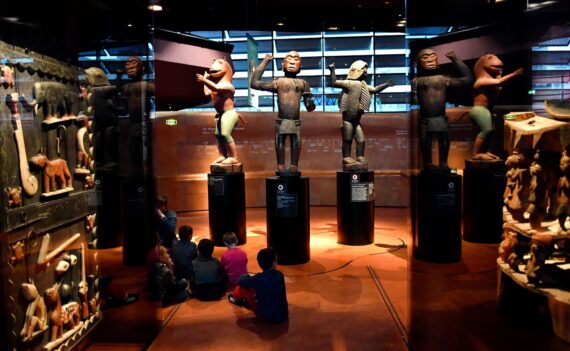 Big royal statues of the Kingdom of Dahomey dating back to 1890-1892 are pictured on June 18, 2018 at the Quai Branly Museum-Jacques Chirac in Paris. - Benin is demanding restitution of its national treasures that had been taken from the former French colony Dahomey (current Benin) to France and currently are on display at Quai Branly, a museum featuring the indigenous art and cultures of Africa. Getty Images

The next time you visit the British Museum in the Bloomsbury area of London, Musee du Quai Branly in Paris, the Weltmuseum Wien in Vienna or the Musee Royal de L’Afrique Centrale in Tervuren, Belgium, take a moment to have an unconventional and maverick reflection on the artefacts housed in these museums. Before you admire and appreciate the exquisite aesthetics of the many artefacts and objects of African origin in these grandeur European museums, ask yourself why are they here in the first place? And where do they belong to?

On November 27 this year, the Senegalese economist Felwine Sarr and French art historian Benedicte Savoy of College de France, published their highly anticipated report on African arts and artefacts housed in European museums in a book titled ‘‘Restoring Africa’s Heritage.’’ The writers of the report were charged by the French president, Emmanuel Macron, and their task entailed investigating and surveying African arts and artefacts in European museums and subsequently propose a clear framework on how to return them back to Africa. This plan of restitution of African arts and artefacts back to Africa is in good faith and ought to be hailed, but we cannot turn a blind eye on how they were acquired in the first place, and the commercial benefits earned by their commodification.

Before you admire and appreciate the exquisite aesthetics of the many artefacts and objects of African origin in these grandeur European museums, ask yourself why are they here in the first place? And where do they belong to?

In the report, Sarr and Savoy underlined that 90% of Africa’s cultural heritages were outside the continent and that they were on display in major museums in European capitals. They attributed this horrendous reality to the colonization of Africa by European imperial powers. The report suggests that arts and artefacts stolen, looted and plundered by colonial soldiers, travellers and European explorers between 1885 to 1960 be resituated back to their rightful owners – Tribes, communities and if necessary to African states.

European museums are now obliged by a substantiated report and basic human decency – morality and ethics – to return arts and artefacts stolen during colonial periods. The grim reality is that European museums, the so-called ‘‘guardians’’ of human civilizations and culture, housed and displayed purloined arts and artefacts. They were artistic scenes and complicit actors to crimes at the same time. So, can European museums un-puzzle this ethical Gordian knot, and do the right thing and salvage their cultural image?

After the report was published, France announced it will return 26 artworks back to the Republic of Benin, despite the West-African nation requesting more that 5000 artworks to be returned. The artefacts France promised to return were seized in 1892 as war spoiled when France conquered the Kingdom of Benin. What about the rest? Christine Mungai, a Kenyan journalist and writer is bewildered that as France promised to return only 26 artworks, ‘‘70,000 others remain at the Musee du Quai Branly in France, not to mention the 69,000 at the British Museum, the 37,000 at the Weltmuseum in Austria; the 75,000 at the Future Humboldt Forum in Germany and the 180,000 at the Musee Royal de l’Afrique Centrale in Belgium- in addition to an unknown number in the hands of private collectors.’’ These numbers are astonishing, and European museums will perhaps never return them all.

France has announced that it will return 26 artworks back to the Republic of Benin, despite the West-African nation requesting more than 5000 artworks to be returned.

Right after the publication of the Sarr and Savoy report and their recommendations, the colonial logic and the Eurocentric approach to ethnographic arts and artefacts inherent in European museums rhapsodized and disembogue. Didier Rykner, a celebrated French art historian and the managing director of La tribune de L’art enunciated this racist logic, he claimed in a France24 debate that African arts “become works of art in museums, because Europeans said its art.” This is the same logic that dehumanised Africans and rendered them unintelligible sub-humans incapable of producing arts. Rykner proceeded by adding that African art “was not art. It was meant to disappear.”

Such paternalistic argumentations that aver that Africans produced art unconsciously or by mere chance, is what brought hundreds of thousands of stolen arts to European museums and still keep them there. Julien Flak, the famous Flak gallery owner protested: “returning the objects… is a good thing… but who are we going to return the objects to?” Julien Flak and his other analogous do not want to understand that these artefacts and objects were stolen goods that belonged to people: Africans. And that these arts have their rightful owners who were denied possessing their arts and cultural heritage.

90% of Africa’s cultural heritages were outside the continent and that they were on display in major museums in European capitals.

The looting and subsequent disappearance of artistic treasures from the African continent had two detrimental outcomes: the loss of national and personal identity and cultural heritage; and their potential contribution to African economies through artistic tourism. The arts council of England projected that for every 1 pound paid as a salary wage in the arts industry and its tourism, generated an additional 2.01 pound in the wider economy of the UK. And just in 2011, close to 10 million individuals who visited the UK contributed to the economy engaged with the arts and culture industry.

Apart from the economic loss for African states, the cultural heritage lost and effaced from the individual and societal imagination is of more seriousness. Colonizing the African continent and its peoples was not restricted to plundering resources, paralleling this process, their cultures, languages and religions were deemed primitive. And yet ironically the artefacts produced by the myriad of civilizations in the continent were shipped to European museums.

Didier Rykner, a celebrated French art historian and the managing director of La tribune de L’art enunciated this racist logic, he claimed in a France24 debate that African arts “become works of art in museums, because Europeans said its art.”

Since the repatriation of African artefacts back to the continent was raised by President Macron, heated debates raged throughout Europe. Many raised issues that utterly insinuated that colonialism did a favour for the African peoples: Europe protected African arts; ‘‘they could have disappeared;’’ private art collector Adam Lindemann interjected, ‘‘who does it belong to?’’ Africans don’t have museums to protect these artefacts. It was surreal watching the indisposed mentality of some of Europe’s most respected artists and intellectuals broadcast. Benedicte Savoy, in an interview with the Le Point made clear that there are more than 500 museums in Sub-Saharan Africa that can accommodate these artefacts in the event that they are returned back. Arguments that claim these arts will get lost in Africa are racist and unfounded. When Al-Qaeda was ransacking the ancient city of Timbuktu to destroy historical manuscripts and artefacts, local peoples smuggled them out using donkeys at night, and it took months to protect them. Africans know how to treasure their arts and artefact

The Felwine Sarr and Benedicta Savoy report is significant for African nations. It anticipates the decolonisation of African arts and cultural heritage. However, implementing the report’s recommendations will be practically unfeasible. For instance, France and Britain have to change their laws that stipulate stolen African artefacts as state property. Returning all the artefacts and objects will take years, but it is critical that European museums heed and react to the contents of this report. They cannot be celebrated as artistic epicentres and yet house stolen arts and artefacts.

The looting and subsequent disappearance of artistic treasures from the African continent had two detrimental outcomes: the loss of national and personal identity and cultural heritage; and their potential contribution to African economies through artistic tourism.

This is not a matter of obsession with colonialism or neo-colonialism as some suggested including the president of the Quai Branly museum, Stephane Martin. African arts in European museums ought to be in the hands of their legitimate owners, no matter how Europe safe-guards and treasures art. These are stolen goods. It is time to allow African youths to have access to their heritage, craftsmanship and artistic ingenuity. There is no need of displaying these artefacts in countries where African youth hardly get visas to visit them.

Also Read
EU Court Refuses to Address Discrimination against Muslims
We use cookies to optimize your online user experience. To learn about our use of cookies and how you can manage your cookie settings, please see our Privacy Policy. By continuing to use our site you are excepting our use of cookies.Accept Cookies & CloseMore Info