Observers comment that it was Erdogan’s tough stance on the US that made other Arab countries to respond. On the eve of the UNGA resolution he slammed the US President, "Mr. Trump, you cannot buy Turkey's democratic will with your dollars. Our decision is clear." 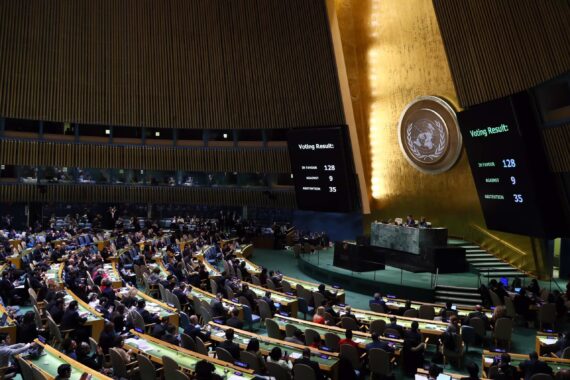 The voting results are displayed on a screen during the emergency special session over Jerusalem held by the UN General Assembly in New York, United States on December 21, 2017. Anadolu Agency

In a strong response to the US recognition of Jerusalem as the capital of Israel, and the subsequent threats by the world’s superpower against those who chose to dismiss the US recognition, two-thirds of the UN General Assembly members voted against the US unilateral decision as “null and void.”

128 countries voted in favor of the resolution which called on the US to drop its support for the expansion of the Zionist state into Jerusalem. 35 members abstained and only 9 members, otherwise unknown client states of the US, namely Togo, Micronesia, Nauru, Palau, Marshall Islands, Guatemala and Honduras, voted against the resolution along with the US and Israel. 21 states did not cast their vote at all.

Though the resolution adopted on Thursday is non-binding, its support by the majority in the General Assembly suggests a symbolic support for the Palestinian cause and simultaneously a rejection of the US power on which the Israeli state has been riding so long recklessly.

The high support for the resolution at the UNGA – the only organ of the body in which all members have equal representation (one member, one vote), reflects the global unanimity on the status of Jerusalem as the future capital of both Palestine and Israel rather than just one dominant state.

The international vote came amid multiple threats by the US President Donald Trump to cut aid for those countries that did not support the position of the US. More, the US ambassador to the UN, Nikki Haley, had threatened countries before the vote, saying America would remember those who “disrespected” it by voting against.

The resolution has triggered a mixed response from Palestinians, with leaders hailing it but public members rejecting it as nothing more than a symbolic ritual.

Palestinian leaders, particularly belonging to the Palestinian Liberation Organization, are known for taking a soft stance against the US and Israel as they survive on the aid provided by these two partners. Over the period PLO leaders have turned themselves into a buffer between the oppressive Israeli state and the oppressed Palestinians.

The spokesman for the Palestinian President Mahmoud Abbas, Nabil Abu Rudeina, commented on the decision by stating, “This decision reaffirms once again that the just Palestinian cause enjoys the support of the international community, and no decisions made by any side could change the reality, that Jerusalem is an occupied territory under international law.”

Saeb Erekat, a senior Palestinian diplomat, said it was a day of shame to those who stood shoulder to shoulder with the occupation and settlements against international law.

“But we appreciate very much that the majority of the international community decided, in spite of the threats and intimidation of the US, to stand tall with wisdom, farsightedness, international law and the rule of law – and not the rule of the jungle.”

While political responses have been in this manner, for the common Palestinians the situation remains the same – the resolution only echoes the past betrayals of the Palestinians at the hands of the Israelis and Americans under the facade of the UN. For them the current UNGA resolution is a futile exercise that, just like previous ones, can change nothing on the ground.

Turkey has remained the most vocal against the US decision on Jerusalem. The country’s President Recep Tayyip Erdogan repeatedly called the decision as “null and void,” called for an emergency Organisation of Islamic Cooperation (OIC) meeting and declared that Turkey would open an embassy in East Jerusalem. Observers comment that it was Erdogan’s tough stance on the US that made other Arab countries to respond. On the eve of the UNGA resolution he slammed the US President, “Mr. Trump, you cannot buy Turkey’s democratic will with your dollars. Our decision is clear.”

“I call on the whole world: Don’t you dare sell your democratic struggle and your will for petty dollars. I hope and expect the US won’t get the result it expects from there [the UN] and the world will give a very good lesson to the US,” Erdogan added.

After the successful General Assembly vote Turkish Foreign Minister Mevlut Cavusoglu, who was the co-sponsor of the resolution, wrote on Twitter: “Today, the international community once again showed that dignity and sovereignty are not for sale, and all other co-sponsors thank every country that supported UNGA resolution on Palestine.”