During the press conference when it was asked whether Sisi should remain as president until 2034, Trump confidently said: “Sisi is a great president and is doing a great job.” This statement alone proved the fact that the Trump administration will continue to ignore the human rights abuses and undemocratic practices in Egypt in exchange to Sisi’s loyalty to U.S. leadership in regional politics. 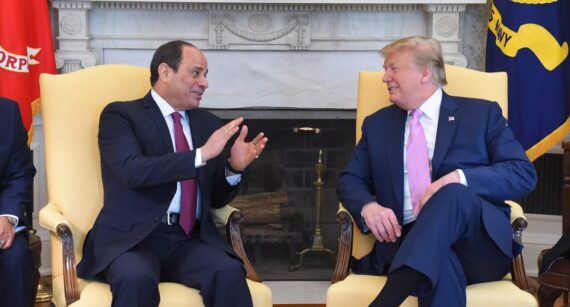 The Egyptian President, Abdel Fattah al-Sisi, who came to power in the aftermath of the military coup on July 3, 2013, met with U.S. President Donald Trump. Since 2017, this meeting has been the sixth occasion where both leaders conducted bilateral talks. Trump’s positive attitude towards Sisi has not changed and the U.S. President continues to praise Sisi’s disputed achievements despite international condemnation and criticism of Sisi’s human rights records. During the press conference when it was asked whether Sisi should remain as president until 2034, Trump confidently said: “Sisi is a great president and is doing a great job.” This statement alone proved the fact that the Trump administration will continue to ignore the human rights abuses and undemocratic practices in Egypt in exchange to Sisi’s loyalty to U.S. leadership in regional politics.

The visit drew both attention and reaction from both the U.S. and the international audience. While many observers, experts, academics, and journalists, have criticized Trump for hosting Sisi, human rights defenders have argued that it is unacceptable for the U.S. to support such an oppressive regime. A number of U.S. senators also expressed their discomfort with Sisi’s human rights abuses. In a letter directed to Sisi, U.S. senators criticized the regime’s crackdown on dissent and argued that the continuation of this attitude would threaten U.S. support for Cairo. Democrat senators Eliot Engel and Ted Deutch and republican senators Michael McCaul and Joe Wilson signed the letter. In addition to this, some U.S. senators have also expressed their discomfort over growing ties between Egypt and Russia, with a letter to Secretary of State Mike Pompeo. The senators warn that Sisi’s close relations with Russia could damage relations with the United States.

In a letter directed to Sisi, U.S. senators criticized the regime’s crackdown on dissent and argued that the continuation of this attitude would threaten U.S. support for Cairo.

On the other hand, critics emphasize that the timing of Sisi’s visit is remarkable. It should be noted that Egypt is on the wake of a constitutional referendum that would change the nature of state from “democracy” to military authoritarianism. In February, Egyptian lawmakers approved a constitutional amendment bill, which will allow Sisi to occupy the presidential seat until 2034.

The amendment also brings the judiciary under the control of the executive body and gives wider privileges to the military. The amendments propose that the military courts are a higher judicial body than civilian courts. It is also suggested that the president should allow the heads of High Courts to be Attorney Generals as well. As can be seen clearly, the proposed amendments are in direct conflict with the principle of separation of powers – which is the most fundamental principle of a functioning democracy.

It is argued that the constitutional amendment would pave the way for the institutionalization of the repressive regime in Egypt. Despite concerns and criticism, the Egyptian regime will hold a referendum in order to legalize the amendments. This is most likely to occur in early May.

The constitutional amendments proposed by Sisi will pave the way for the institutionalization of the repressive regime in Egypt.

Another significant amendment is the establishment of a new chamber of Parliament, which would be named as the “Senate.” The Senate will have the power to propose new draft laws, pass draft laws that were received from the President and approve the general budget and international agreements. It is suggested for the Senate to have 250 seats. The president will be able to appoint one third of senators for five-year terms. If such an amendment is approved and if the president will become able to appoint such a large number of senators, he will eventually have the ability to pass anything that he wants. Critics have argued for this amendment to be unfit for a democratic system.

Despite these shortcomings and criticism, Sisi aims to adopt the constitutional amendments proposed, particularly the article that would extend his presidential term limit. It can be argued that in order to find a legitimate ground for these changes, Sisi has been trying to obtain international support that would strengthen his arguments domestically. It was due to these efforts that the main agenda of the meeting between Trump and Sisi was the constitutional amendments in Egypt. As Trump has fervently supported Sisi’s presidency in his statements, it can be argued that the Egyptian premier must have received what he wanted from the visit.

Although there is a large number of opposition in Egypt, who has criticized the constitutional amendments proposed by Sisi, their ability to prevent such changes is limited. As the regime’s crackdown on the opposition intensified to secular and liberal groups, there is hardly any incentive to raise voices against these proposals.

As Trump fervently supported Sisi’s presidency in his statements, it can be argued that the Egyptian premier must have received what he wanted from his latest visit to the U.S.

As hopes for a democratic transition has rapidly disappeared, the Egyptian regime is clearly opting in for more authoritarian rule. Critics argue that the political and social atmosphere in Egypt is experiencing one of its worst periods in the country’s history. While pressure on the opposition in Egypt have been more severe than ever, civil society, academia, and the media have been subject to intense oppression. All kinds of voices against the government are silenced, and the ongoing political and economic instability in Egypt is pushing the patience of the public against the Sisi administration. As this atmosphere intimidates opponents for an uproar, the possibility of a social uprising in the country remains a vivid reality.

Ismail Numan Telci is the Deputy Director of the Middle East Institute (ORMER) and an Assistant Professor at the Department of International Relations at Sakarya University. He is the author of the ‘Dictionary of the Egyptian Revolution’ and is the editor of www.misirbulteni.com – a news webpage focusing on the developments in Egypt.

Also Read
Jordan: Silent Brother in Gulf Politics
We use cookies to optimize your online user experience. To learn about our use of cookies and how you can manage your cookie settings, please see our Privacy Policy. By continuing to use our site you are excepting our use of cookies.Accept Cookies & CloseMore Info