Despite Withdrawal, Medal for Sisi Only Exposes Lack of Credibility

How was it possible to grant the Medal of St. George to Egypt’s president Abdel Fattah al-Sisi, a true dictator, and to describe him as a person who looks for dialogue between all parties and a hope for Egyptians? 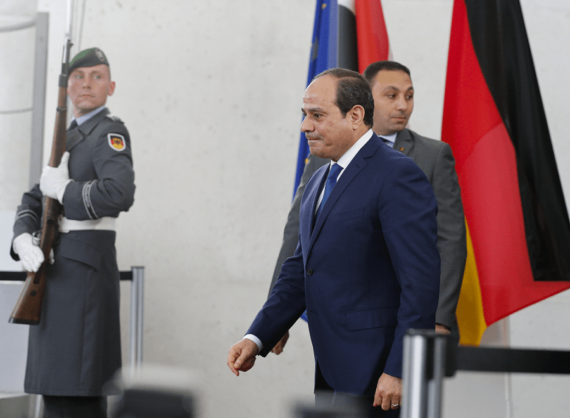 Germany’s foreign policy has gained global attention these days because of its efforts in the context of the Libyan crisis. Although the conference in Berlin which was held on January 19 resulted in no actual success, at least some global and regional actors have expressed their willingness to end the ongoing crisis in Libya. While Germany has been visibly decisive in boosting a peace process or ceasefire in Libya, some days after the conference the renowned Semper Opera House in the German city of Dresden announced that this year it will award the Medal of St. George to Egypt’s president Abdel Fattah al-Sisi, who has ruled the country since the military coup in 2013 and with widespread violations of human rights.

The Semper Opera Ball, which is the largest classical entertainment event in German-speaking Europe, as well as one of the most important ball events in Europe, initially granted the medal to “recognize Sisi’s peace-making efforts in North Africa” and for his so-called “leadership as a statesman”. On Sunday, January 25, 2020, a German delegation handed over the Medal of St. George to Sisi, who is regarded by most Western media representatives and political circles as a dictator or at least an “autocratic leader”.

The German public harshly criticized the decision to award Sisi both on social media and in some mainstream media outlets. Furthermore, one of the renowned anchors of the upcoming ball, journalist Judith Rakers, cancelled her contract to host the event following the award.

But how was it possible to grant such an award to a dictator and to describe him as a person who looks for dialogue between all parties and a hope for Egyptians? The manager of the Opera House, Hans-Joachim Frey, initially stated that the ball was not a political event but a cultural one and that “although one is aware of Sisi and his acts”, he had described Sisi as a person standing for “stability in the region”. However, due to increasing pressure from the public and left-liberal circles, Frey, subsequently apologized and also declared that the Opera House “distance themselves from this awarding” which was “a mistake”.

The Saxony state government, though indirectly, continued to support the idea of awarding Sisi by referring to the management of the Semper Opera Ball without any consequences or sharp comments. The government’s spokesperson clearly stated that “Al-Sisi is not a democrat, there exists violations of the law (in Egypt), but this man is doing an important stabilizing job in the region”. Furthermore, despite admitting that the award was a mistake, it was not withdrawn immediately.

Additional criticism also came from the German public broadcaster MDR, which still broadcasted the Semper Opera Ball on February 7, despite criticism against the management. MDR said that despite the understandable and clear criticism regarding the award ceremony, “the Semper Opera Ball remains an important piece of culture of Central Germany, which inspires many people…freedom of the press and freedom of speech are an indispensable asset for the broadcaster.”

Consequently, nothing changed at all, and “Egypt’s dictator received a red carpet”, as Stephan Kühn, a Greens MP of Germany’s Federal Parliament, described the initial awarding of Sisi in a very critical tone in his open letter prior to the ball on February 7. In the end, the award was withdrawn only some days prior to the ball after the organizers faced obvious public pressure and harsh criticism. It seems that the organizers tried to save the remaining reputation of the Semper Opera Ball.

Actually, despite withdrawing the medal in a final moment, this is not the first time Sisi has been de facto honored in Germany. The German government’s position towards the Sisi regime is already well known and unfortunately has not changed in the years since Sisi’s bloody coup in 2013. This is despite the continuous, widespread and systematic crackdown on human rights, weak democratic mechanisms, the failure of the rule of law and the brutality of the military regime in Egypt. Germany and other nations in the EU have turned a blind eye to this and are not acting in compliance with their own Western values which espouse the importance of human rights. It even went so far that some years ago Germany’s former President Joachim Gauck openly welcomed and rolled out the red carpet for Sisi in Berlin.

Even though the Egyptian president’s brutal reputation is known among media circles and behind closed doors within Berlin’s political elites, he is still described as a partner in the “fight against terrorism”, and, of course, as one of the biggest purchasers of specific German products, namely weapons. Therefore, it does not surprise anyone that Germany’s arms exports to Egypt and to the United Arab Emirates, both who support the Libyan warlord Khalifa Haftar, significantly increased in the first half of 2019, despite both countries’ involvement in the Yemen conflict. Furthermore, Egypt is now the second biggest customer in the German weapons industry with 880 million US dollars in purchases.

Now the ball is over but the questions remain as to the Medal’s future, which has been tarnished by past conferral on other autocratic figures. Abolishing this “Medal for Nothing” might be a reasonable option.

But the more crucial question is why do some circles welcome or even award anti-democratic leaders instead of putting pressure on them? The recent Semper Opera Ball case made it clear that promoting German (or Western) culture and values in conflict-ridden regions does not seem sincere. Such generic expressions hide the real, namely economic and political motives. In the case of Hans-Joachim Frey it might be also related to the likely goal of exporting the ball to the newly opened opera house in Egypt’s capital, as a local commentator and German daily pointed out.

Nevertheless, it is quite a good signal that despite the silence at the federal governmental level, many members of Germany’s political parties criticized the award decision. The media and public opinion did not welcome the honoring of such a political figure who systematically violates human rights. However, there remains a lack of action and pressure that needs to emerge on domestics and international levels whenever such a case emerges.

Given Germany’s current efforts in the Libyan crisis, honoring Sisi will not really undermine the country’s overall reputation as well as the federal government’s credibility. No doubt, realist and pragmatic moves in international politics are considered from a rather different perspective. However, while Germany, its media and public opinion distinguish their country’s stance on the Libyan crisis from those countries which support the Libyan warlord, then, one should expect a more cautious approach towards authoritarian figures, even if it is only limited to a cultural event, as in the case of the Semper Opera Ball.

Also Read
Who Is in Control of Egyptian Football?