In response to President Erdogan’s announcement of the operation, the U.S. defense ministry has stated that a one-sided military operation towards the northeast of Syria is “worrying” and “unacceptable.” 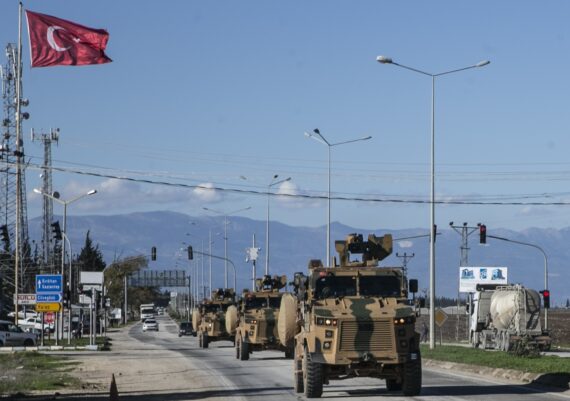 Reporting for Anadolu Agency, Levent Tok and Muhammad Mislo wrote in an article, “Excluding the west of the Euphrates, YPG sits at the top of a square that deepens 45 thousand kilometer square from the line between the east of the river and Iraqi border.” According to the article, this area is one-third of the total lands of Syria.

With the intense help of U.S. airstrikes and weapon support, the YPG/PKK has been able to spread to the east of the Euphrates River.

The article adds that the biggest settlements at the east of the Euphrates are Aleppo’s Ayn al-Arab (Kobani), Rakka’s Tel Abyad and Tabka, Al-Hasakah’s Qamishli, Amude, Rasullayn towns and the north parts of Deir ez-Zor; approximately 70% of the population in this zone are still Arab. Terrorist elements intend to control the occupied lands easier in the process of state-building by forcefully re-designing the demographic structure. The YPG has forced Arabs, Kurds, and Turkmens from their lands and has prevented those that want to return as the Daesh threat has been eliminated.

According to the data provided by the High Council of Syrian Tribes and Clans, the YPG/PKK has forced approximately 1.7 million people to migrate.

The U.S.-backed YPG/PKK has seized Syria’s richest energy sources in the name of ‘fighting Daesh.’ For example, YPG/PKK terrorists seized the biggest natural gas facility in Konoko in the north-east of the petrol-rich Dier ez-Zor in September 2017. The terrorists also captured the Jafra petrol field as well as the biggest petrol field in Syria – Al-Omar.

The article in discussion claims that the terrorist elements in the region have also taken control of the three biggest dams of Syria with the air support provided by the U.S. 70% of the total electricity need of Syria is provided by these three dams.

According to Joseph Dunford – Chairman of the Joint Chiefs of Staff – “(In YPG area) We are estimating 35-40 thousand local force to be trained and equipped in order to provide stability.”

Abdulkadir Selvi provides some details from the operation. According to his sources, the operation that will be launched does not carry the same pattern as previous operations, and a different strategy will be applied. Regarding the question of ‘facing Americans,’ according to Selvi’s sources, the military presence of the U.S. is within the plan and that the U.S. military will not be a target.

The main goal of the operation is to pull 1.200 Free Syrian Army soldiers from the area of OES and placing them in Akchaqala, just across Tel Abyad. In addition to this, Turkish Armed Forces have sent reinforcement troops to the Ceylanpinar area across Ras al-Ayn. The main reason for the Turkish military to enter these is the fact that, like pulling Afrin apart from Ayn al-Arab, with the operations conducted from these two points, Ayn al-Arab will be pulled apart from the Jazira at the east. This will be a huge blast to the YPG’s attempt of state-building; while enhancing Turkish dominance in Syria, it will destroy the unity of YPG.

In response to President Erdogan’s announcement of the operation, the U.S. defense ministry has stated that a one-sided military operation towards the northeast of Syria is “worrying” and “unacceptable.”