A flashing statement made by Bass was that “There have been no terrorist attacks in Turkey for the past 9 months. This is not because ISIS (Daesh) have given up, but a result of our cooperation.” This statement stirred questions as to whether the ambassador implicitly threatened Turkey with terror attacks. 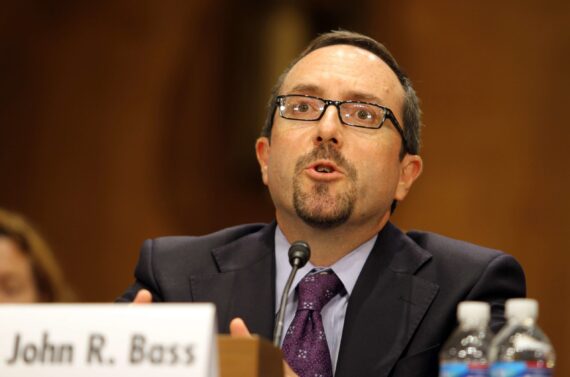 Announcing that he is to leave Ankara for service in Afghanistan, US Ambassador John Bass made statements during his farewell at the Diplomatic Correspondents Association (Diplomasi Muhabirleri Dernegi) in Ankara, which left listeners confused.

In reference to the visa crisis between the US and Turkey and the arrest of Metin Topuz, a US Consulate worker, Ambassador Bass stated that “No one working in US missions are hiding. No worker is escaping the justice system.”

More, the Ambassador underlined that the visa suspension decision was made by the US government. “The current disagreement between both countries will be solved through dialogue.”

A flashing statement made by Bass was that “There have been no terrorist attacks in Turkey for the past 9 months. This is not because ISIS (Daesh) have given up, but a result of our cooperation.” This statement stirred questions as to whether the ambassador implicitly threatened Turkey with terror attacks.

In relation to American personnel located on the Turkish Air Force base in Incirlik, Bass repeated announcements made by the Pentagon that the visa row has not affected American operations or personnel in Turkey.

He added that “Coalition counter-Daesh operations out of Incirlik and other Turkish facilities are closely coordinated with and have the full support of our Turkish partners.”

Following the decision to suspend non-immigrant visas, on Monday the Turkish Lira lost its value against the dollar.

In regards to the economics of the tension between the US and Turkey, speaking at a press conference, Garanti Bank CEO Fuat Erbil stated that the market impact of the suspension of U.S. visa services will neither be permanent nor negative.

Stressing that the banking sector has enough foreign currency liquidity to deal with more shocks, Erbil said “The capital adequacy of the ratios of the Turkish banking sector are probably at their highest levels in history.

“I think that the situation will be solved swiftly, with rationality and goodwill, with certain urgency,” he added.

Speaking at a news conference in Belgrade, Serbia, President Erdogan stated that “the offender in this problem is the United States of America itself.”

While Prime Minister Binali Yildirim called for the visa issue to be solved as soon as possible, he also added that “The U.S. took a decision which does not comply with our alliance.”

Speaking at the AK Party’s parliamentary group meeting, Yildirim claimed that so-called security concerns were not the real reasons behind the decision to suspend the visa service.

In reference to the arrest of Metin Topuz, the PM said “We are probing some people working in the American mission for possible links to FETO,” adding that no one is above the law in Turkey, even if they work in U.S. missions.

FETO leader Fetullah Gulen, who is the lead of the failed coup attempt that was orchestrated last year, is still located in the US.

The PM added: “Did you ask us before jailing a deputy director general at one of our official banks when on duty in your country?”

Mehmet Hakan Atilla, deputy general manager of Turkey’s Halkbank, was arrested in the U.S. for alleged violation of US sanctions against Iran.

In addition to the fight against FETO, the PM highlighted the continuous support from the US to PYD. Urging the US to immediately stop supporting PKK-linked PYD and YPG terrorist organizations, he said “Working with our enemies is not what allies do.”

In addition to the AK Party, Nationalist Movement Party (MHP) leader Devlet Bahceli also came out against the US decision to suspend visas.

Speaking at his party’s parliamentary group meeting on Tuesday, Bahceli said he approved Turkey’s retaliation in suspending non-immigrant visa services in the US citing security concerns.

Describing the move by the US as a “scandal,” Bahceli stated that “the US tried to cause a virtual crisis with lame excuses.”

Also Read
IMF: Expected growth in Turkey upgraded
We use cookies to optimize your online user experience. To learn about our use of cookies and how you can manage your cookie settings, please see our Privacy Policy. By continuing to use our site you are excepting our use of cookies.Accept Cookies & CloseMore Info