Ditches Against Peace, Terror Against Politics

During the ditch terror that the PKK inflicted, half of the population in Sırnak’s Cizre and Silopi districts, Diyarbakir’s Sur district and Mardin’s Nusaybin district were directly affected by the incidents. The number of people migrating from the four districts reached 93,000. 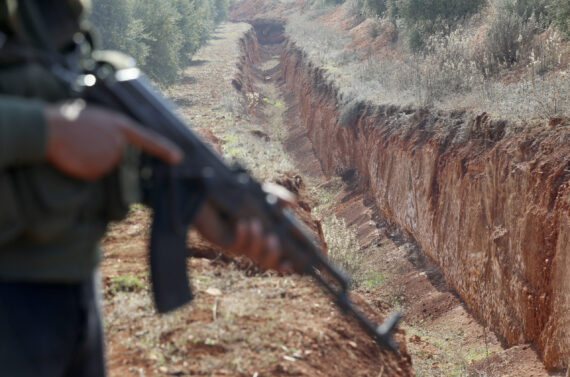 The Turkish Armed Forces continue to work on clearing PKK ditches in areas that are cleared of terrorists. Anadolu Agency

During his years in office as Prime Minister, President Recep Tayyip Erdogan expressed his determination to resolve the Kurdish question at the cost of his political life. Considering the terror group PKK, which has been operating for the past 30 years and is condemned by all the political parties in Turkey, it was still hard to publicly suggest a solution on the subject back then. Firstly, 13 years ago, Erdogan delivered a speech in Diyarbakır province: “It is improper for major countries to condone the past mistakes since the problems are all ours. To be more specific, the Kurdish question is not a problem confronted by a certain part of the nation, but a problem that interests the entire nation, including myself.” In 2009, he said: “Whether you call it the Kurdish question, Southeast question or East question… No matter how we call it, we have initiated working on the question.”

With this, Erdogan embarked on the most venturous peace project in the history of the Turkish Republic, which is widely known as the Reconciliation Process. He kicked off works to negotiate with the outlawed PKK through their imprisoned leader Abdullah Ocalan, who was until then described as a “baby killer” by media outlets, the judiciary and the political parties that were dominated by the secular Kemalist tradition.

The Kurdish question was discussed thoroughly throughout the process, and every single taboo was faced. Introducing amnesty and building a new Turkey was being mentioned. A Committee of Wise People, which encompassed people from all segments and ideologies including nationalists, liberals, religious conservatives and seculars was formed. The Committee strived to explain the west and the east of the country to each other and convince people to the reconciliation process. Even the bases of the Justice and Development Party (AK Party) and the Nationalist Movement Party (MHP), who have recently formed an alliance ahead of the June 24 elections, listened to the suggestions. As the process went on, people stopped hiding their Kurdish identity and embraced it. Kurdish lessons were introduced in schools, and Kurdish political propaganda was allowed. In Nowruz celebrations that year, Ocalan, previously called a “baby killer,” addressed entire Turkey. All these developments were unimaginable for Turkey until then.

Everyone showed great enthusiasm to the process, but the first signs of the major problems in the process appeared during early 2015. After the general election held on June 7, 2015, PKK attacks abruptly gained speed with the influence of the new developments in Syria. In a short period, the reconciliation process was replaced by the ditches dug in cities and town centers, clashes and curfews. During this period, Turkey was simultaneously confronted with Daesh and PKK attacks. After a year, the military coup attempt organized by the Gulenist Terror Group (FETO) became the last straw for the Turkish nation.

Turkey faced a new fact particularly in the aftermath of the 2015 election: the ditches. Although the ditches were occasionally seen in several places before the election, the PKK systematically began digging ditches in many city and town centers following the election with the support of FETO operatives who infiltrated key state apparatuses and bureaucracy.

During the November 1 election held in the midst of this chaos, the pro-PKK Peoples’ Democratic Party’s (HDP) vote share declined and thus the party lost 21 of its 80 deputies assigned to the Parliament with the June 7 elections. The AK Party again came to power alone and the new government was eventually formed. Instead of the reconciliation process, the new government prioritized enabling public security. Stating that they regarded the ditches as a defense mechanism, HDP co-chairs expressed autonomy discussions in the shadow of terrorism.

In 2016, a bomb attack was organized to a military shuttle in Ankara that carried both military and civilian officers. 29 people were killed in the attack while dozens were injured. The PKK’s break-away faction, namely the Kurdistan Freedom Hawks (TAK), claimed responsibility for the attack.

During the ditch terror they inflicted, half of the population in Sırnak’s Cizre and Silopi districts, Diyarbakir’s Sur district and Mardin’s Nusaybin district were directly affected by the incidents. The number of people migrating from the four districts reached 93,000. The people were so enraged that Murat Karayilan, a senior PKK figure, had to express that the ditch strategy in the cities was wrong.

Turkey will go to the polls on Sunday. Currently, the counter-terror efforts are ongoing both inside and outside the country. When it comes to how the HDP views the ditches after all the incidents, the party co-chair Pervin Buldan and the party’s presidential candidate Selahattin Demirtas gave the following answers with regard to the ditches that led to hundreds of casualties and displaced thousands of people: Buldan claimed, “People dug ditches in self-defense,” whereas Demirtas stated, “I do not have issued a single remark that shows support to the ditches. We should have been more insistent and courageous in our attempts to get rid of them.” (Demirtas issued a written answer as he is currently under arrest.)