Divestment of weapons sent to PKK/PYD in sight

The intent is to regain large vehicles and heavy or crew-served weapons from YPG once specific threats have been defeated, the Pentagon claimed. 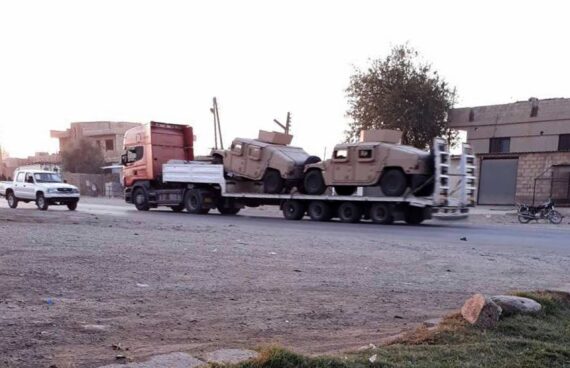 The Pentagon responded today to the questions asked at the press conference yesterday to spokesman Colonel Rob Manning.

To the question whether the weapons once distributed to the PKK/PYD will be taken back again, Col. Rob Manning responded in a written statement.

“It is our intent to regain large vehicles and heavy or crew-served weapons once specific threats have been defeated,” he said.

“Make no mistake: a lot of fighting is still necessary to defeat the remaining pockets of ISIS [Daesh], and substantial work remains to ensure ISIS’s lasting defeat in the region, particularly as the group reshapes itself into more of an insurgency,” he added.

According to Anadoly Agency’s report, Manning also claimed that US advisors would monitor the weapons and supplies and their use, ensuring they are only used against Daesh.

In the statement it has been argued that the US-backed forces have agreed to comply with the Geneva Convention and the Law of Armed Conflict, as a precondition of US support.

To the question as to whether the SDG (PKK/PYD) were given arms to support the Geneva talks, defense minister Jim Mattis responded that Pentagon officials said the fight with Deash continues and the Coalition would continue to support its PKK/PYD partners as they provide security that enables stabilization assistance to liberated areas.

In the Geneva II Conference on Syria, a UN-backed international peace conference on the future of Syria, the declared aim is to end the Syrian Civil War by bringing together the Syrian government and the opposition to discuss clear steps towards a transitional government.

Thirty-six members of the Syrian opposition’s High Negotiations Committee are expected to attend peace talks in Geneva this week.

It was stated that while the details of the support were not shared, the support given to the PKK/PYD was taken into consideration.

Despite its well-documented ties to the PKK, which was recognized as a terrorist group by the US, EU, and Turkey, the US has treated the PKK/PYD/YPG as allies in its anti-Daesh efforts.

In the PKK’s over three-decade terror campaign against Turkey, more than 40,000 people including security force personnel and civilians, have lost their lives.

“PKK/PYD/YPG terrorist organization’s efforts to carry out a covert ethnic cleansing by changing the demographic structure of Syria is against international law and human rights, and, therefore, it is unacceptable,” the statement said.

The council emphasized that Turkey will continue to take all necessary measures at the Turkey-Syria border area in order to ensure its own security.

According to the statement the Turkish Armed Forces are successfully continuing its “observer mission” in Syria’s Idlib de-escalation zone.

“It is observed that peace and security will literally be achieved when this mission is carried out near western Aleppo and Afrin,” it added.

The recent incident during a NATO drill in Norway involving a civilian Norwegian official who depicted the Turkish president Erdogan and Turkey’s founding leader Ataturk as an “enemy collaborator” was also mentioned in the statement, adding that such hostile attitudes and expressions were “unacceptable.”

It was stated that such events harm the solidarity principle of NATO, which is the basis of this alliance and that developments linked to the incident would be followed closely.