Do Football Players Have no Right to Freedom of Opinion?

While last week many media representatives focused on the alleged doubtfulness of Ozil’s and Gundogan’s Germanness, no one in Germany addresses the same issues when, e.g., ethnic German politicians, who have very close relations with foreign political leaders, meet these leaders. These Germans are perhaps criticized for their political positions but no one evaluates them regarding their Germanness. 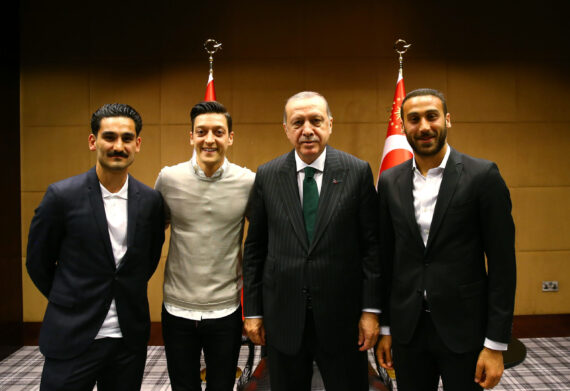 Two successful football players of the German national team, who are both of Turkish descent and were born in Germany, posed for photos with Turkey’s President Recep Tayyip Erdogan in London. Following this, the head of the German football federation (DFB) criticized the national team players while German media outlets and nearly all major political party representatives –also German chancellor Merkel– subsequently commented on the issue in a similar negative and critical tone.

Regarding the major criticisms of Ilkay Gundogan and Mesut Ozil, besides racist comments on social media, three arguments and exaggerated positions are striking.

First of all, it’s addressed –above all by German politicians with Turkish origin– that the two national football players are German citizens and consequently they should, according to them, have nothing to do with the Turkish President, whom Gundogan called “my President.” According to this argument, both players’ president is only the German President, Frank-Walter Steinmeier, whom the two players later also met, most probably due to the collective mobbing and weird pressure-like environment by German political, sports and media circles. Besides the fact that Gundogan has dual-citizenship and consequently the Turkish President is legally also his President, it’s a populist and meaningless request to force a person with a so-called “hybrid emotional identity,” consisting of both Turkish and German components, to accept only one country’s identity.

It’s also not a question of loyalty to pose for a photo with a President but rather an act of freedom of opinion and expression. Furthermore, the debate becomes more hypocritical, irrational and exaggerated when social media users and media outlets cast doubt on the “Germanness” of the two. While last week many media representatives focused on the alleged doubtfulness of Ozil’s and Gundogan’s Germanness, no one in Germany addresses the same issues when, e.g., ethnic German politicians, who have very close relations with foreign political leaders, meet these leaders. These Germans are perhaps criticized for their political positions but no one evaluates them with regards to their Germanness. Similarly, following the release of the photo, some right-wing and nationalist commentators even addressed that Ozil does not sing the German national anthem. According to this point of view, this reveals additionally that Ozil is actually not a “real German.”

The second major criticism is about the meeting’s negative effect on the “integration process” of people with a migration background. Both football players are actually good examples for successful integration in Germany, unless assimilation is the main goal of this process. Apart from that, some stressed that both guys were not aware of what they are doing or talking about. This argument though is very insulting, above all, due to meaning the lack of their mental capacity. However, as the Vice President of the Federal Parliament rightly addresses this point –and as the only one among German politicians– football players also have the right to speak and to interfere in issues apart from sports.

The third criticism concerns the claim that football players are instrumentalized by President Erdogan for the elections on June 24. It is also difficult to understand this argument because even if the football players would actively support the President and his policies, which was not the aim by meeting him, there would be no legal and other barriers–except the exaggerated attitude by German authorities. And what would the DFB do as a consequence and against the position of even two-thirds of Germans, who don’t support the idea to kick Gundogan and Ozil out of the national team?

Excluding two of the most successful football players right before the World Championship because of political and media pressure? Furthermore, the right to freedom of opinion protects not only ideas or positions of domestic issues, it’s a phenomenon having a universal meaning. Though, the issue gets very often disregarded when people with Turkish roots are at stake. For Turks, the behavior of politicians and even DFB representatives, who told Gundogan and Ozil that there act was not appropriate and that one has to “talk” with them, gets perceived as an act of arrogance. People ask; who gave these people the right to judge about the position of other people –Turks- and even ideas?

One should keep in mind that Turkey goes head to head with Germany in the battle to host the European Football Championship in 2024. This could also be another reason regarding the discussion initiated by the head of the German DFB. Nevertheless, the country has a diverse potential which is also represented in its successful national football team. There are many professional German football players with Turkish origin who feel themselves belonging to both Turkey and Germany. Nearly forcing these people to decide for one of the two countries, is not the best option German society would prefer. German institutions, media outlets, politicians and intellectuals should rather prevent the recently increasing nationalist discourse from developing itself hegemonic among German society. By this, one should also stop abusing the integration process in a strange disguise and in particular with regard to German citizens with Turkish roots.