Especially in the last twenty years, university rankings which originally were regional and created to aid students and researchers have become increasingly global, establishing a prominent market. 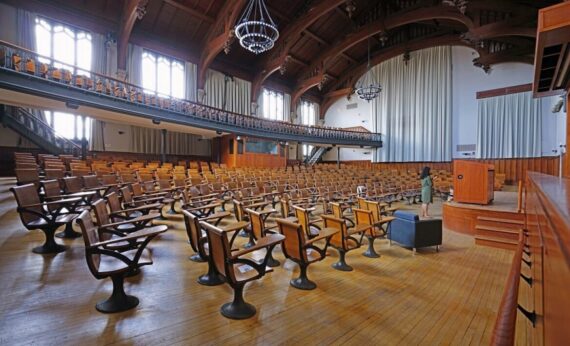 On the other hand, the fierce and relentless competition in the world economy imposed more burdens on higher education institutions: universities are now expected to be a center of attraction for international students and academics. Internationalization began to be seen as a source of revenue, an element of public diplomacy, and an instrument to attract the most intelligent and diligent people in the world to increase the research capacity in economic competition. All of these processes necessitated universities to position themselves in accordance with external factors. Since its conception, universities had never faced such pressure. The impact of these processes, expectations from higher education institutions and how higher education institutions respond to societal and external factors continue to be the subjects of heated discussions today.

Especially in the last twenty years, university rankings which originally were regional and created to aid students and researchers have become increasingly global, establishing a prominent market. There are new ranking institutions being founded every day. While the countries publish national ranking lists employing various criteria, they start to carry these rankings to a global level as they gain legitimacy. As the rankings were recognized by countries, these rankings started to have an increasingly transformative effect on higher education systems. Despite all the discussions about the criteria being extremely narrow and the ranking system’s possible failure in reflecting quality, the world university rankings increased the pressure and made it a matter of prestige for countries to have higher ranking universities on the list. Those who set the criteria and standards rule the higher education market. Moreover, those who set the criteria are able to direct the flow of money due to the investments on higher education. Especially developing countries have started to allot tremendous budgets to found world-class universities and to be on these lists.

Considering the impact of world university rankings on higher education institutions’ behaviors and the immense budgets allotted to rank higher on the list, it is important to mention several crucial matters and risks. Firstly, the top 25 universities on the lists which are world-renowned and, thus, have a vast area of legitimacy, have almost never changed. Moreover, the universities ranking between 25th and 100th on the list have only experienced minimal changes. Hence, there is a monopoly in the highest ranking segment of the lists and this monopoly is expected to perpetuate itself in the near future, unless the criteria are changed (see John Aubrey Douglass’s book The New Flagship University: Changing the Paradigm from Global Ranking to National Relevancy). Prestige and past performances determine the future rankings. As the wealthy have the potential to become wealthier, these ranking systems allow higher education institutions which have extensive experience and a powerful research and publication capacity to maintain their positions on the list. Therefore, the newcomers will not be able to make leaps forward on the list in the near future, even if they allot tremendous budgets to rank higher.

As the ranking systems which rely on a limited set of criteria are facing increasing criticism, alternative ranking systems are being researched. For instance, most of the European countries ranking lower than the US and the UK on the list forced the EU to take action; as they believed rankings would not face a change in the short term, they started to work on an alternative ranking system which also takes the quality of education into consideration. As a result of their efforts, a new ranking system known as U-Multirank, multidimensional ranking of higher education institutions, emerged. As it was not completely acknowledged by the US and the UK, its recognition was limited to European countries. Therefore, the new ranking systems changing the main trend on world university rankings have a limited recognition and legitimacy.

Especially during the recent years, it is being discussed that there is an increasing trend in a brain drain due to the inconsistency between the economic opportunities provided by having a world-class university and the quality of graduates.

What should be done?

The criteria employed by world universities rankings are definitely important and they should be also deemed important by higher education institutions, which are already restructuring themselves according to the common criteria. However, the world universities ranking is not everything and it should be taken with a grain of salt due to the reasons stated. The most important aspect is to have powerful higher education institutions which are connected with local, national and regional issues. This does not entail isolation or a disconnection from the global issues; besides, national and regional issues are not independent of the global ones. Therefore, while creating solutions for national and regional issues, the universities also contribute to the global knowledge database. Nevertheless, there is nothing more natural than a higher education institution prioritizing its immediate environment, thus the country it is in.

On the other hand, the higher education system should have a flexible structure which will allow institutions to create dynamic resolutions for the country’s issues. Balanced and efficient planning of all processes, along with increasing diversification which will allow higher education institutions to have distinct missions are the most important aspects. In other words, national needs and demands have to be taken into consideration. Meticulous and stable steps must be taken to further a small number of flagship universities in certain fields in the world through distribution of roles and careful allotment of national resources, while ensuring these universities continue to prioritize national interests and issues.