Does the Politics of Native-National Signify the AK Party’s Decline?

The AK Party’s political paradigm is shaped by an amalgam of liberal, conservative and nationalist values. The relative importance and impact of these discrete values fluctuates as to changes in political conjecture. 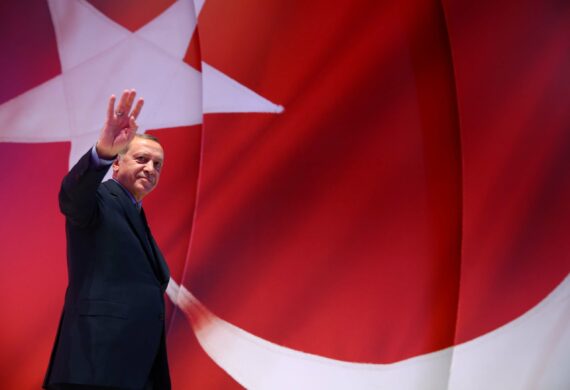 Turkish President Recep Tayyip Erdogan (C) greets the crowd during a meeting organized by an NGO "National Will Platform" with the attendance of July 15 bloody coup attempt's martyrs' relatives and veterans at Sinan Erdem Dome in Istanbul, Turkey on April 12, 2017. Anadolu Agency

Last week AK Party’s Istanbul Mayor uttered that “the municipality will give priority in providing certain services to the districts who vote for the AK Party.” Some analysts comment that this rather unfortunate statement has revealed the culmination of the AK Party’s retreat to its communal frontiers. Thus, it is taken as an acknowledgement that the governing party is no longer able to represent the political whole, or the state, but that it is one of the groups within society.

Indeed, this argument of the AK Party’s decline has been in circulation for a while and is linked to the party’s shift to the politics of native-national. This political shift is argued to have taken place once the AK Party’s move for stretching and deepening its clout in society was stopped by the Gezi Park Protests in 2013 and subsequently pushed back to its communal frontiers. The general elections on June 7, 2015, where the AK Party failed to obtain a majority of the votes and to form a single party government for the first time, and the success of the “no” campaign in the April 16, 2017 referendum on constitutional change over the government system are usually cited to mark the critical moments of the AK Party’s decline. Ironically the political opposition in Turkey also celebrates the political discourse of native-national as they believe it amounts to the weakening of the AK Party’s quest to build a new Turkey.

However, almost in complete contradiction with this decline argument, some other analysts stress and take a critical posture towards the politics of native-national, which is viewed as signaling the AK Party’s further integration with the state. The upshot of the decline argument, as noted above, is that the AK Party can no longer stand for the political whole, or the state. This second argument, on the other hand, points to the opposite direction, which highlights the AK Party’s excessive integration with the state. For this reason, the AK Party government and its politics of native-national is condemned as being undemocratic and polarizing.

During its first phase (2002-2008), the AK Party struggled to democratize the political system. This involved ending the situation that the Kemalist forces “own” the state. In line with modern democratic politics, its policies were directed towards freeing the political from the state. Thus, as the institutional structure of bureaucratic tutelage was dislocated, there emerged a distance between the state and politics, accordingly the sphere of democratic politics continually expanded and democratic political structures began to consolidate. In short, the government has become more powerful vis-à-vis the bureaucracy.

During its second phase (2008-present), on the other hand, testified the AK Party’s various attempts to fill the place of power with a particular content. The AK Party has taken decisive steps towards increasing its grip on power by providing the most inclusive political content, yet it has remained faithful to the basic democratic norms that in principle the place of power should remain empty. For this goal, in the period of 2008-2015 the AK Party came up with the politics of civilization in order to bring society together. Once this identity failed, especially owing to the lack of concreteness, the politics of native-national was proposed.

All in all, while the AK Party has not yet been able to put forward an all-compassing identity, the politics of civilization and the politics of native-national have provided the most inclusive and diverse representations of the political community at different times. This situation has kept the AK Party as the hegemonic force in Turkish politics thus far and seems to prolong it in the foreseeable future.