Time is more than ripe for the TCMB to reconsider its monetary policy stance and take into account real factors such as employment, economic growth, income inequality and, last but not least, the development process of the country when constructing monetary policy function. After all, central banks are for the people, right? 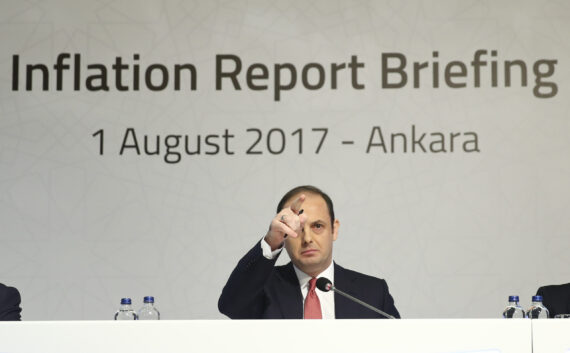 Governor of Central Bank of the Republic of Turkey (CBRT), Murat Cetinkaya delivers a speech during the Inflation Report Briefing at Hilton Hotel in Ankara, Turkey on August 01, 2017. Anadolu Agency

In my previous column, I touched upon how neoliberalism and the financialization of the globe have rendered countries around the world susceptible to the caprices of the financial industry. Because of the pervasive influence of the financial industry, many developing countries including Turkey have found themselves in the last two to four decades unable to pursue a growth – and development – conducive monetary policy regime, which features a low policy interest rate and an undervalued exchange rate.

Despite Quiet Threats, Mothers of Diyarbakir Continue to Resist

NATO Emphasizes Unity without Consensus but China May Change This

Unlike “official monetary policy understanding in the world” and as Post-Keynesian economists advocate, inflation results mostly from cost-push factors, not demand-pull ones, and the Turkish experience in the 2000s attests that clearly as shown in an empirical paper in a refereed-journal by TCMB itself. According to the study, half of the inflation in the period of 2006-2016 in Turkey cannot be explained at all, and more than 90 percent of the other half has not been demand-driven, but cost-driven, which is agonizingly at odds with the “weak” theoretical fundamentals on which TCMB constructs its “strict” monetary policy stance.

All in all, the TCMB purportedly has long been trying to contain the inflation rate by a strict monetary policy regime in Turkey, only to no avail on the part of inflation rate, and – unfortunately to the detriment of the Turkish economy and “common people.” The whole “strict” monetary policy stance in the 2000s has debilitated the real economy in favor of the financial industry, hence the deindustrialization of Turkey. Of course, not to mention the aggravated income inequality emanated from this monetary policy regime. One should add that the same deindustrialization process happened in developing countries such as Brazil in the 2000s. Then, time is more than ripe for the TCMB to reconsider its monetary policy stance and take into account real factors such as employment, economic growth, income inequality and, last but not least, the development process of the country when constructing monetary policy function. After all, central banks are for the people, right?

Also Read
What can Turkey learn from the South Korean Development Experience?
We use cookies to optimize your online user experience. To learn about our use of cookies and how you can manage your cookie settings, please see our Privacy Policy. By continuing to use our site you are excepting our use of cookies.Accept Cookies & CloseMore Info