While the AK Party cannot be blamed for reducing democracy to elections alone, it is accepted that the governing party has yet been unable to bring society around a workable unity 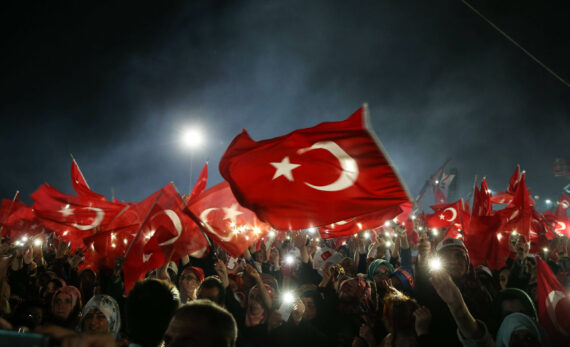 People hold Turkish flags during the ‘Democracy and Martyrs’ Rally’ held to protest against the July 15 failed coup attempt by FETO at Yenikapi in Istanbul, Turkey on August 7, 2016. Anadolu Agency

There is widespread criticism that Turkey’s ruling AK Party has a poor democratic performance. Disrespect for basic rights and liberties of political and social opposition is counted as the main reason for that. This is claimed to testify the fact that the AK Party performs an authoritarian governance and undercuts democracy. Indeed, the AK Party fails to provide an equal treatment of all demands in society. In other words, it is unable to embrace society as a whole. The question is whether failing to represent all of society, or not being able to respond to all demands in society makes a political party authoritarian. More to the point, can we label a political party authoritarian in every instance of failure to carry out the impossible task of democracy?

What is to be democratic?

In order to give a satisfying answer to this question we should carefully differentiate two things: democracy and authoritarianism. Authoritarianism means to violate the basic principle of democratic politics, which is accepting the emptiness of the place of power. Respecting the principle of democracy involves first of all having a multi-party political system, periodically conducting open and fair elections, and allowing the political opposition to be present in the parliament. Secondly, we can also add that the right to oppose and criticize policies of the ruling force through various channels is to be respected. And finally, the ruling power is to admit that its rule is bound by law. Therefore, if the ruling group do not allow for political opposition and assumes its power above the law, then we can declare that there is an authoritarian regime in the country.

If the ruling political party respects the presence of political opposition and allows to be limited by law, then we can say that there is a democratic regime. This posits the different dimensions of democracy. However, democratic regimes also require providing an identity to the social whole. This identity dimension constitutes the second moment of democracy. Indeed, democracy is an ambiguous political regime which encapsulates both moments, that is identity and difference, and requires to hit a handsome balance between these conflicting forces. Harboring these two conflicting forces, democracy is an impossible task and cannot fully be achievable. Even if the ruling political power respects the difference dimension, it usually fails to provide an incontestable identity to society. Generally, it fails in the identity dimension and falls short of embracing all demands in society. This failure can be viewed as a lack of democracy, yet cannot be labelled as authoritarianism.

Is the AK Party authoritarian?

Looking from this perspective, the AK Party is not representative of authoritarian politics. However, it might fail to provide a full-fledged democratic rule. To put differently, its lack of democracy does not amount to authoritarianism. Its failure in democracy stems from not being able to provide an incontestable identity to the social whole. In its early years of rule, the AK Party sought to provide an overarching identity by responding to all social demands. It aimed at trivializing the existing societal differences between Turks and Kurds, Sunnis and Alawites, conservatives and secularists, and Muslims and non-Muslims around the so-called politics of “civilization.” The party believed that society as a whole had to come together around this identity, which was supposed to remedy all societal fault lines.

Yet this politics of civilization faced a strong resistance in society. With the Gezi Park protests (2013) and the PKK stimulated HDP riots (2014-15), it came to a halt. Following this failure, the AK Party began to provide a new identity through the so-called politics of “native and national.” Currently, the AK Party seeks to bring society into unity through this discourse, as it calls society to come around this identity of being “native and national.” Yet the party has faced and continues to face robust resistance by the opposition. The political opposition follows the politics of difference by raising the criticism that the AK Party does not respect rights and liberties in society. This undoubtedly seeks to block the AK Party’s hegemonic moves. However, the opposition does not perform the second moment of democracy – it does not even consider providing a workable unity in society. Therefore, the opposition in Turkey also fails in its democratic performance.

Briefly, the AK Party cannot be blamed of reducing democracy to elections. The governing party embraces both moments of democracy. However, so far, it has yet been unable to bring society around a workable unity.