Between Turkey and Europe remains a communication gap and a mutual frustration merely undermining any dialogue for a constructive approach. The impasse seems destined to continue and to become a real paradox. 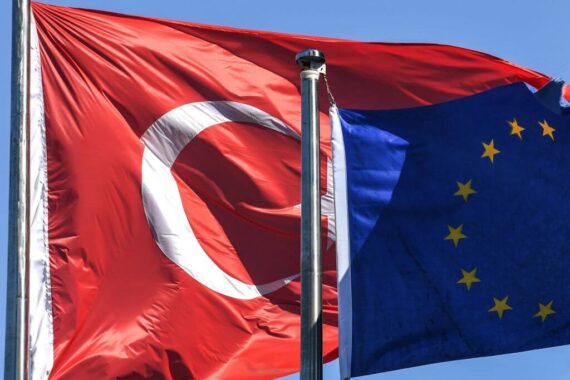 Turkish flag and European Union's flag float in the wind at the financial and business district Maslak on August 15, 2018 in Istanbul. Getty Images

Almost as a historical coincidence, on the third anniversary of the 2016 failed coup attempt, the European Union has placed serious sanctions on Turkey. To some extent, the decision is coherent with the European stance towards Turkey as it underlines the double standard approach. Certainly, it is not a mystery that the relations had become very tense after 15 July, 2016, generating a profound and mutual frustration. However, the casus belli legitimizing the adoption of measures against Turkey refers to the thorny Cyprus issue and to the exploration activities started around the island. Indeed, the EU foreign ministers decided to punish Ankara over its alleged “illegal drilling activities within the territorial waters of member state Cyprus.” The outgoing President of the Council of Ministers – Donald Tusk- clearly stated “Despite our best intentions to keep good neighborly relations with Turkey, its continued escalation and challenge to the sovereignty of our Member State Cyprus will inevitably lead the EU to respond in full solidarity.”

Essentially, the sanctions endorse that “in light of Turkey’s continued and new illegal drilling activities, the EU decides to suspend negotiations on the Comprehensive Air Transport Agreement and agrees not to hold further meetings of the high-level dialogues for the time being.” Furthermore, “the Council endorses the European Commission’s proposal to reduce the pre-accession assistance to Turkey for next year and it invites the European Investment Bank to review its lending activities in Turkey, notably with regard to sovereign-backed lending” by warning that the EU is ready to take action against individuals and companies involved in Turkey’s drilling activities on the areas, which are perceived as interference in Cyprus’s Exclusive Economic zone.

What we are witnessing today between the European Union and Turkey is the product of a long-standing deadlock.

Actually, due to the already existing tension with Brussels, Turkey had recently experienced a significant decrease on EU financial support. Indeed, for the 2014-2020 period, Ankara was supposed to receive around 4.45 billion euros for implementing political reforms and other projects aiming to facilitate Turkey-EU accession, which was downgraded of 175 million euros. As matter of fact, the sanctions aim to penalize Turkey, but they look like a cosmetic move. Indeed, what we are witnessing today it is the product of a long-standing deadlock. For example, the EU-Turkey talks on civil aviation got stuck just after the first round of negotiations started in 2016 as part of 2015 Aviation Strategy for Europe, due to the animosity of the Greek Cypriot administration. Even though Turkey is a very important global hub and valuable aviation partner for Europe, as long as there is not a reciprocal recognition and flight connections this file will be frozen.

Moreover, it is not the first time that the pre-accession assistance got reduced. In other words, anything happening on the Eastern Mediterranean does not surprise much as it is just the unfair price Turkey has been paying for the historical mistake made by Europe itself back to 2004. That year has to be recognized as a real turning point and the mother of each problems affecting Turkey-EU relations. After the Annan Plan and the related referendum on the future of Cyprus, although the Turkish Cypriots had voted for the reunification of the island and the Greek Cypriots supported the division, Brussels rewarded them by granting the status of full EU member. As it is sadly already known, internationally the Turkish Republic of Northern Cyprus (TRNC) is not recognized as a sovereign state, but as invaded territory. Hence, Turkey plays a crucial role in protecting the Turkish community while it suffers the price of a distorted negotiation process as Cyprus vetoed most EU accession chapters and many EU leaders sympathized with the Greek side. This is an anathema for Turkey and its interests as EU candidate state as well as Turkish Cypriots guarantor. In other words, there is not much Ankara can do without being slammed or sanctioned. That was the case in 2004 and along the first stages of the negotiation process. Nowadays, again the story repeats itself. The EU has shown just a one-way approach by supporting unconditionally anything the Greek Cyprus claims- like the self-proclaimed economic exclusive area.

Anything happening on the Eastern Mediterranean does not surprise much as it is just the unfair price Turkey has been paying for the historical mistake made by Europe itself back to 2004.

The European management seems to not think twice in extending its jurisdiction on controversial areas and overall in targeting Turkey in a sort of provocative and nonobjective style. Overall, the EU believes that anything Turkey is doing on the Cyprus offshore is a violation of international law while on the other hand Ankara claims its own legitimacy in defending the Turkish Cypriots, who have equal rights to the natural resources of the islands. To tell the truth, the Turkish Cypriots have recently proposed a joint committee for the hydrocarbon activities off the island, which was simply ignored by the EU institutions. Actually, the upstream problem lays on the definition of legitimacy that once again goes back to the old question of the island division that Europe not only failed to solve, but has even contributed to further complicate.

Despite its international recognition and EU full membership, Turkish Cypriots consider the Republic of Cyprus illegitimate as the Greek Cypriots consider the Turkish–Cypriots self-governance illegitimate. However, the European Court of Human Rights recognizes TRNC “subservient administration” to the Government of Turkey, based on the principle that no population can remain in a governance vacuum. Thus, once again the situation is tangling up with increasing tones that are unlikely to produce further consequences.

Being understood that Turkey’s journey towards the EU got frozen due to some domestic stalemates and double standard approaches, the only card on the table recently has been the economic one. As matter of fact, Europe is one of the main trade partners of Turkey, even though some issues persist on the review of the current customs union. Likely, the measures adopted by EU institutions will not have a dramatic impact on the Turkish market, which has already proved some sustainability and resilience after the severe crisis of the last year with U.S. Moreover, for Europe Turkey is a valuable partner on the containment of immigration flows. Indeed, in a time when the far-right extremist groups in Europe are arising as protest to the current management of some critical issues such as security and migrants, Brussels cannot afford to lose Ankara’s support and collaboration hence there is room to think that any further sanctions would have limited impact.

Overall, between Turkey and Europe remains a communication gap and a mutual frustration merely undermining any dialogue for a constructive approach towards those pending issues. Thus, the impasse seems destined to continue and to become a real paradox.