The support that the U.S. and other European countries have shown for Sisi has encouraged Cairo to institutionalize its authoritarian rule. The referendum was an important step in this regard. 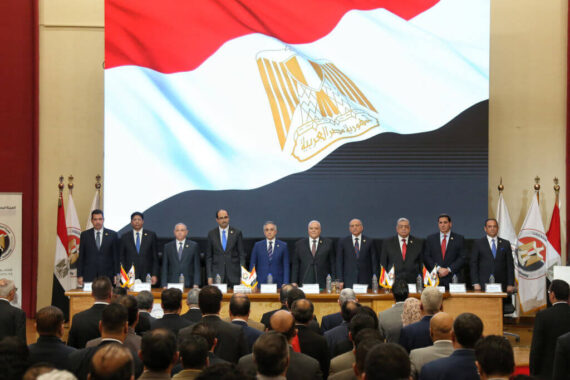 Lasheen Ibrahim, (5-R), head of the Egyptian National Elections Authority (NEA), attends a press conference at the NEA's headquarters to announce the results of the national referendum on the constitutional amendments extending the presidential term, potentially allowing Egyptian President Abdel-Fattah el-Sisi to stay in power until 2030. Getty Images

The constitutional referendum that allowed Egyptian President Abdel Fattah al-Sisi to extend his mandate until 2030 took place in Egypt. It is argued that the political environment in the country was not suitable for a referendum. As the apparatus of the regime and media strongly favored a “yes” vote, the advocates of the “no” vote did not have a chance to organize a campaign as opposition groups, including the Muslim Brotherhood, had boycotted the referendum.

The government also took measures to increase voter turnout. Organizing free shuttles to voting centers and distributing food-packages for those who proved that they had voted were among such measures. Despite these efforts, in comparison to previous elections and referendums, voter turnout was low. Official statements displayed a voter turnout of 44 percent. However, this figure was much lower according to international observers.

The voter turnout was low in Egypt’s referendum in comparison to previous ones. Official statements displayed a voter turnout of 44 percent.

As was the case for previous elections and referendums, the result was in favor of the regime’s plan. The constitutional amendments were adopted with 88.8% of voters approving the changes. The new articles adopted damage the principle of separation powers as the president is given the authority to appoint the heads of high judicial institutions. The military has also been granted new privileges, making the country more of an authoritarian regime.

Despite his unsuccessful tenure as president, opposition groups in the country have increasingly targeted Sisi. This is mainly due to the fact that since the military coup in 2013, Sisi has failed to achieve most of his policy objectives. His policies damaged democratic institutions, harmed social integrity among Egyptian society and deepened economic uncertainties while creating mistrust between the public and the state.

One of the most important miscalculations of the Sisi regime was the unlawful practice towards the Muslim Brotherhood organization. With its decades-long civil society activities in the country, the Muslim Brotherhood was considered as a powerful civil movement. Many Egyptians, including liberal and secular movements, criticized and blamed the Sisi regime for the brutal crackdown on the movement. Widening political pressure to other opposition groups has severely shaken the confidence of Egyptians about the Sisi regime. This has been particularly observed among the country’s youth, who have no chance to freely express their ideas.

Local and international human rights organizations criticized the referendum, which will allow Sisi to extend his tenure until 2030.

A similar observation can be made about the country’s economy. Despite its long-term repercussions, the Sisi regime signed an agreement with the IMF. The agreement brought heavy burden on Egyptians, particularly those with a low income. With increasing prices and unemployment, the living conditions of millions of people in Egypt deteriorated. Sisi’s inability to find a solution to these problems has had a negative effect on the country’s youth.

The Sisi regime has not been successful in implementing a strategy towards ending the violence and terrorism in the country. During the past years, security forces have suffered serious losses in the Egyptian army’s comprehensive operations in the Sinai Peninsula, which have caused discomfort among the Egyptians. On the other hand, the Egyptian army’s alleged attacks on civilian targets are also a source of concern.

Despite its weakness, some regional and international actors have been supporting the Sisi regime. This is mainly related to the strategic gains of these actors. Some countries that have benefited from the continuation of the Sisi regime include the United States, France, Germany, and Israel.

The constitutional amendments that were adopted in Egypt damage the principle of separation powers as the president is given the authority to appoint the heads of high judicial institutions.

Bilateral relations between Egypt and Israel have improved significantly during the Sisi period and the two countries have become strategic allies. This is of great importance for Israel in preventing the threats emerging from Arab countries in the region. As Tel-Aviv secured a reliable partner in regional politics, it has been able to expand its policies against Palestine. More, countries such as the U.S., France, and Germany benefit from Sisi’s presence in strategic and economic terms. For Washington, Sisi is a strategic ally for U.S. policies towards the Arab world. Therefore, the U.S. administration provides support for the Sisi regime in exchange for Cairo’s loyalty in regional politics.

European countries also benefit from Sisi’s rule. Despite the country’s economic crisis, Sisi has purchased French military equipment worth billions of Euros. These purchases have made a significant contribution to France’s defense industry. Germany, on the other hand, supported the Sisi regime for Egypt’s strategic position in preventing a new migration wave from Africa. Germany has additionally benefited from economic activities with Egypt.

The support that the U.S. and other European countries have shown for Sisi has encouraged Cairo to institutionalize its authoritarian rule.

Despite its oppressive policies since 2013, the support the U.S. and other European countries have shown Sisi has encouraged Cairo to institutionalize its authoritarian rule. The referendum was an important step in this regard. Despite the failures in domestic politics and economics, the Sisi regime has continued to survive especially due to the support that it has received from international powers. Therefore, it can be argued that the existence of the regime depends entirely on external support. Although there is strong discomfort within the domestic polity, the possibility of another popular uprising seems out of sight mainly due to the heavy pressure and oppression on any opposition towards the regime in Cairo.