Egypt’s Operation in the Sinai and Human Rights

Egypt’s operations in the Sinai take place through direct consultation with Israel. As relations between the two countries grow to a strategic alliance, Cairo and Tel-Aviv may join their efforts to restructure the Northern Sinai. 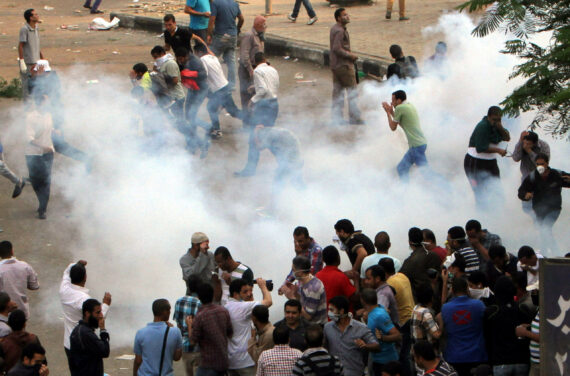 Egyptian security forces use tear gas and plastic bullets to disperse pro-democracy activists during protests marking the 40th anniversary of the 1973 victory over the Israeli army at Ramses Square on October 6, 2013 in Cairo, Egypt. Anadolu Agency

The Northern Sinai region of Egypt has recently become the scene of intense operations of the army. The attack on a mosque in November 2017 that claimed lives of more than 300 hundred civilians was a milestone in Egypt’s policy towards the armed groups in the region. Following the attack, President Abdel Fattah Al-Sisi announced a new strategy to clean up the region from armed groups by intensifying security-oriented policies. In this context, the Egyptian army launched a comprehensive operation in February 2018. The operation aimed to terminate the logistical capacities of these groups while intensively targeting the armed groups in the region.

On the other hand, it was alleged that the on-going operations in the region have been targeting civilians and that the Egyptian army seriously violates basic human rights – thanks to the years long State of Emergency. A recent video that showed Egyptian soldiers killing a young civilian in the Northern Sinai has sparked criticism throughout the country. Human rights advocates have argued that the operations carried out by the Egyptian army in the region are in full secrecy and that civilians have been frequently targeted in these operations.

Another dimension of the recent criticism to the military operations in the Sinai is the establishment of a buffer zone along the border between Egypt and the Gaza. While initial works for the buffer zone had started in July 2013, the Egyptian army accelerated the process in October 2014. The government announced that the buffer zone would cover an area of 79 km2 and all human activities in this area would be terminated for safety reasons. In this context, the Egyptian government has decided to destroy houses, shops and agricultural areas in this region which includes the whole of the city of Rafah, which hosts the Rafah Crossing Point between Egypt and Gaza.

In January 2018, the Egyptian regime decided to extend the scope of the buffer zone between Egypt and Gaza. This was part of the large-scale operation of the Egyptian army to the armed groups that operate in the Northern Sinai region. The civilians in the region and human rights groups heavily criticized the operation. It is argued that the Egyptian army has widely ignored the basic rights and freedoms during the operations with torture, arbitrary arrests and extrajudicial killings practiced at a frequent level.

The situation in the Northern Sinai region was recently revealed in a report published by Human Rights Watch. The report included interviews with the people of the region and accounts that were previously published. It gave a detailed account of how the Egyptian army destroyed houses in the cities of Rafah and Al-Arish. The destruction of these cities were also illustrated with satellite images. According to the report, the Egyptian army also targeted homes of opposition activists in order to punish them because of their stance towards the Sisi regime. The report also detailed various methods of human rights abuses of the Egyptian military.

These operations in the Northern Sinai region will apparently increase the hostility of the people in the region towards the regime. By targeting civilians and destroying their homes, the army will further deepen the problems in the region. This situation has already been causing radicalization of the youth. Reports suggest that there is a considerable amount of youth from the Sinai region, who have joined the armed groups in protest of Egyptian army’s operations.

In short, there are three reasons behind Egypt’s operations in the Northern Sinai. The first reason is to fight against terrorist groups in the region. The major armed actor in the region is the Wilayat Sinai, a local branch of Daesh. The second reason is to suspend tunnel activities between Egypt and Gaza. The Egyptian army particularly targets the tunnels that are considered as lifelines of the Gaza region. By demolishing tunnels, the Egyptian regime aims to weaken Hamas, citing their ties with the Muslim Brotherhood. Finally, Egypt’s operations in the Sinai take place through direct consultation with Israel. As relations between the two countries grow to a strategic alliance, Cairo and Tel-Aviv may join their efforts to restructure the Northern Sinai, starting from eliminating “dangers” that constitutes threat for both countries.