Ekrem Imamoglu Is Not the Political Rockstar Turkey's Opposition Is Expecting

The real cause of excitement in both Turkey and the West over the CHP's Istanbul mayoral candidate Ekrem Imamoglu has been the thought that he might manifest himself as a new leader and be an alternative to the Turkish President Recep Tayyip Erdogan. 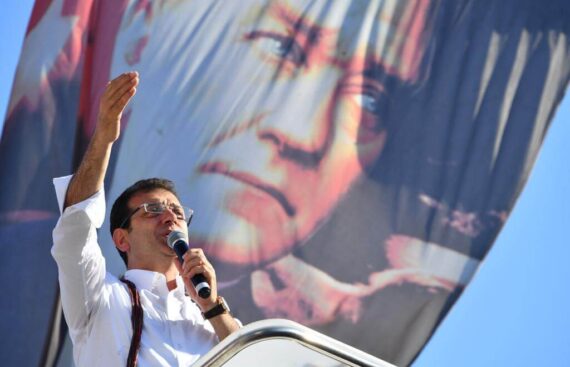 The real cause of the excitement in both Turkey and the West over the Republican People’s Party’s (CHP) Istanbul mayoral candidate Ekrem Imamoğlu has been the thought that he might manifest himself as a new leader and be an alternative to the Turkish President Recep Tayyip Erdoğan. Although his performance until the March 31 elections led people to think this possibility, he has proved as from March 31 that he does not have such leadership qualities, and this situation will not change whether he is elected as the Istanbul mayor on the June 23 elections or not.

Of course, Istanbul mayor’s office is a critical position since the city has been the capital of many empires throughout history and reflects Turkey in a nutshell in the current context. Erdoğan became Istanbul mayor 24 years ago and found a chance to become a national leader who can show himself in world politics. He is undoubtedly the most powerful leader Turkey has witnessed as he received more than 50 percent of the vote share in the first round of last year’s presidential election despite being in power for 17 years.

İmamoğlu’s score in the mayoral election with the support of several other parties such as the Iyi Party and the Peoples’ Democratic Party (HDP) unavoidably kept the opposition’s hopes alive since it was similar to the beginning of Erdoğan’s story. Although many names following the same trajectory disappeared from the political scene, such as Nurettin Sözen from the CHP, Ali Müfit Gürtuna from late Necmettin Erbakan’s Virtue Party and Bedrettin Dalan from the Motherland Party (ANAP), dissidents still thought “everything will be great” with İmamoğlu.

While many believed Imamoglu to hold leadership characteristics and be an alternative to Turkey’s President Erdogan, he has proved as from March 31 that he does not have such leadership qualities.

To that end, the CHP has engaged in an activity that is peculiar for political literature and distributed a 50-page booklet entitled “Radical Love Book,” which quoted the words of prominent names in Islamic philosophy and Sufi literature such as Yunus Emre, Rumi and Haci Bektash Veli. The cover of the booklet features a family with two children, with a mother who wears a hijab. The family carries a placard that reads “Love, brothers, sisters…” By employing religious motifs, the booklet warns about negative feelings such as arrogance, hate and grudge, and tells people how they should approach each other and meet on a common ground.

The messages given are not bad. The last page of the booklet reads: “This is an intra-party education material for the local election campaign and has been prepared to contribute to the discourse of the CHP party organization and party volunteers during the campaign process.” The introduction, which was penned by Seyit Torun, the CHP Vice President in charge of local administrations, reads: “I have met many honorable villagers who would not touch a handful of the rice they are entrusted to, they don’t generally vote for our party. […] Some pedantic people who have never seen or met these people insulted them by calling them ‘bribe-takers.’ They even called workers and villagers lazy although these people sweat and work very hard to make a living.”

İmamoğlu has managed to appeal to large masses in Turkey since his profile has been different from conventional CHP politicians and his tone is appropriate for 70 percent of Turkish society, as described in the booklet written by the advertiser İlyas Başsoy. While displaying this profile, İmamoğlu did not experience the handicaps a typical CHP member would have due to his family background. In a similar vein, the CHP also aspired to get away from its conventional stance. But this went so far that the CHP deputies reacted when a Justice and Development Party (AK Party) deputy addressed İmamoğlu as “the CHP’s mayoral candidate” during a televised debate. They said: “you deliberately underlined that he is from the CHP.”

Their election propaganda has definitely reached its target to a certain point. However, for political leadership, one has to have an ideological cause or a political agenda. Over the course of the campaign period, İmamoğlu abstained from remarking any political opinion. If he is a candidate to a grand metropolitan city as Istanbul, then he could have shared whether he had any projects on public works. However, in Turkey’s collective memory, being a CHP member means going against all kinds of operations.

Over the course of the election campaign, Ekrem Imamoglu abstained from clearly manifesting any ideological cause or a political agenda.

The CHP has always opposed the bridges built in Istanbul, new airports, private TV channels and the investments made in the telecommunications sector. This has been a major handicap for İmamoğlu, but the televised debate between the two mayoral candidates, Binali Yıldırım and İmamoğlu, might have presented him a chance to erase this past from people’s minds. The moderator of the debate was a pro-CHP journalist whose license plate is “CHP” and who is employed by Murdoch’s Fox Tv.

İmamoğlu’s opponent in the debate was a prominent and experienced politician who has marked significant projects in transportation, and who served as the prime minister, minister and parliamentary speaker. But as a requirement of the debate format, the new one is always put in a more advantaged position than the other. Despite this, the new one could not predicate his promises on any solid ground. While Yıldırım summarized in 3 minutes what his party have done so far and what they will do and mentioned Marmaray, Avrasya tunnel, highways, rail systems, metro and train lines, İmamoğlu began his words by saying: “We will conduct feasibility works for one year with every wing of the transportation sector,” and did not mention any projects. This means that he and his team did not even conduct a preliminary feasibility work for their promise, which shouldn’t have been the case.

Imamoğlu continued: “We will build a 500-kilometer cycle path, finish the incomplete projects. With an integrated approach, we will work with all the actors such as minibuses, taxis, and shuttle services.” He also promised that he will open 150 kindergartens in Istanbul, but his opponent reminded that he only built one kindergarten when he was Beylikdüzü mayor although he promised to build 11. İmamoğlu also said that a scholarship worth 400 TL will be granted to 75 thousand students for 8 months of the year, to which his opponent responded: “Municipalities cannot grant scholarships. They did it in the past, but İmamoğlu’s party, the CHP, brought it to the Constitutional Court 10 years ago and rendered municipal scholarships impossible.” On the next day, Istanbul Metropolitan Municipality issued an announcement: “Before its cancellation initiated by the CHP, a 122 million 290 thousand TL worth education fund was granted to a total of 202 thousand 750 university students between 2004 and 2008.”

Although the debate has not affected the opinion of the electorate according to the polls, İmamoğlu has proved once again that he does not actually have the leadership qualities people attribute to him. No matter what the result will be on the June 23 election, İmamoğlu could not go beyond drawing the image of a contractor successful in his job who constantly gives all-encompassing and embracing messages despite his inability to give any tangible promise for the future. Is it to early to speak about the future? I don’t think so.