Speaking to reporters, presidential spokesperson Ibrahim Kalin said that “Elon Musk came to Turkey to discuss the launch of Turksat 5A and 5B satellites.” 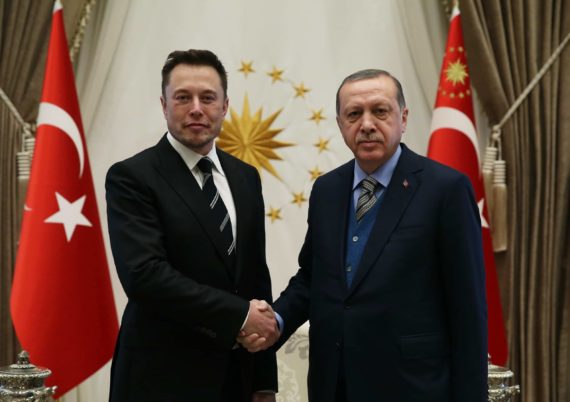 Amid developments in regards to Turkey developing its own automobile, Tesia and SpaceX CEO Elon Musk was in Turkey on Wednesday.

The meeting lasted for an hour and 10 minutes.

Speaking to reporters, presidential spokesperson Ibrahim Kalin said that “Elon Musk came to Turkey to discuss the launch of Turksat 5A and 5B satellites.”

Kalsin also added that discussions are expected over a deal with Turkey’s chosen satellite-manufacturing Airbus Defence and Space firm, of which Space-X is a sub-supplier.

Ibrahim Kalin also informed reporters that another satellite, Turksat 6A, will also start operations in the coming years – pushing the number of Turkey’s active communications satellites to six.

More, in regards to the production of Turkey’s first domestically produced automobile, Kalin added that this issue was also discussed with Elon Musk. This also raised questions on possible partnerships.

“Elon Musk’s company is a major sustainable energy company. So, we talked about topics such as new generation batteries, solar energy, and wind energy.”

“We also discussed issues such as how to overcome traffic problems in metropolitan areas, digging tunnels and having underground traffic,” Kalin stated.