The shift to a presidential system may be the most critical step in institutionalizing democratic politics in Turkey. It promises to further the empowerment of the elected representatives of people vis-à-vis the bureaucracy, enlargement of the sphere of politics and increase the influence of elections. This is the core of the silent revolution that Erdogan has achieved in the last 15-plus years. 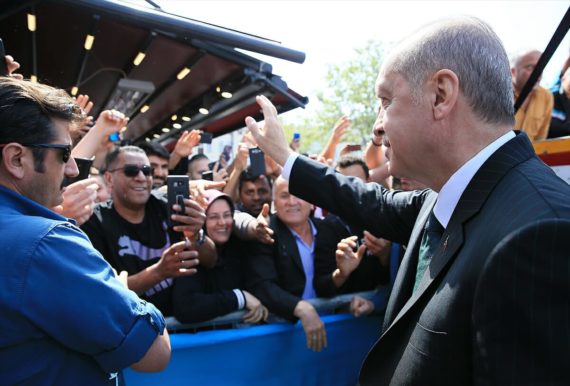 Turkish President Recep Tayyip Erdogan greets the crowd as he attends the opening ceremony of Spice Bazaar after restoration works in Fatih district of Istanbul, Turkey on May 04, 2018. Anadolu Agency

On Sunday (May 6) at a public meeting Turkey’s President Recep Tayyip Erdogan will declare a manifesto in run-up to the June 24 election, which is the first presidential election of the country. Erdogan’s decision to declare a manifesto is noteworthy because it will mark not only Turkey’s transition to the presidential system but also a new era in the country’s political life. For this reason, it is expected that Erdogan will stress on the achievements that Turkey has scored so far in its attempt to transform the old (Kemalist) regime and the direction that the country will take in the future.

Indeed, despite fiery disagreements on its character, everybody concedes that Turkey has undergone an epochal change under Erdogan’s leadership and that has brought the country into a new political reality. This political reality has two dimensions: freedom and power.

The emergence of a new political actor. Looking at the freedom dimension, at the center of this political reality lies the emergence of a new political actor. Before 2002 the periphery, which was mainly composed of conservatives and lower-classes, was scattered and thereby subject to the Kemalist hegemony. Kemalists, who successfully equated themselves within the political community, strived to include the periphery into this secular-nationalist whole or excluded them in the event of resistance.

Since the disorganized state of the periphery was the main cause of its subjection to the Kemalist hegemony, the AK Party under Erdogan’s leadership, first of all, aimed at bringing the periphery into unity through the discourse of conservative-democracy. This was the first step to produce a new political actor and facilitated the containment of the Kemalist hegemony. Secondly, as this new political actor came to fruition, the state was decoupled from Kemalism. This resulted in the dislocation of the Kemalist hegemony. And lastly, it has begun to expand and deepen its hegemony in society by incorporating various societal demands into its conservative-democratic whole. As a result, the periphery has evolved from being subject to Kemalist hegemony to a counter-hegemonic force and finally to a hegemonic force.

Kemalist oligarchy depended on the rule by a privileged secular-nationalist minority that included mainly the state bureaucracy, civil servants and the upper-classes. The line between whom to rule and be ruled was drawn by membership to the official ideology, that is secular-nationalism. Despite the presence of a multi-party parliamentary system, those political groups that did not bear the official ideology were not granted the right to rule. For the state was claimed to be possessed by the secular-nationalists. If the others had the chance to rule, they were limited by the bureaucratic tutelage or excluded from power by force.

After 2002, the rule of the game significantly changed with the advent of a new political actor. The political system began to be democratized. For this purpose, the place of power was emptied and freed from the Kemalist content. No particular political actor or ideology has given the right to own it forever and without entering into political struggle. Hence, the sphere of democratic politics enlarged and accordingly, the importance of elections mounted. Political actors started to compete for power by producing the most inclusive identity through incorporating as much societal demands as possible. Thus, the right to rule began to be determined by the ability to produce the largest power bloc, the majority.

All in all, the shift to a presidential system may be the most critical step in institutionalizing democratic politics in Turkey. It promises to further the empowerment of the elected representatives of people vis-à-vis the bureaucracy, enlargement of the sphere of politics and increase the influence of elections. In a nutshell, it places the popular will above any other will and at the center of politics. This is the core of the silent revolution that Erdogan has achieved in the last 15-plus years.