This time, Erdogan’s way in Turkish foreign policy is a strategy to save the country first and to turn it into a regional powerhouse later on. 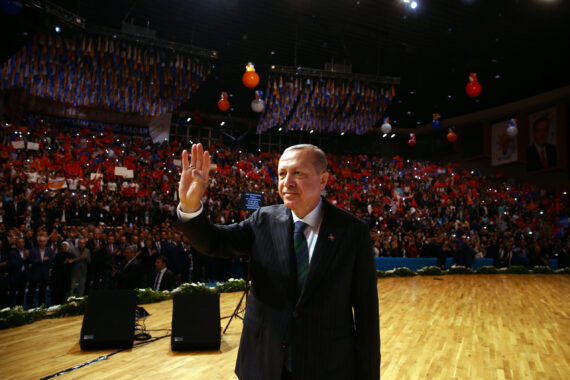 On Sunday, President Recep Tayyip Erdogan announced his election manifesto at the provincial congress of the AK Party in Istanbul. The June 24 presidential election manifesto constitutes a textbook example that portrays how President Erdogan and AK Party think about Turkey’s current domestic and international politics. Moreover, it hints at the future of Turkish domestic and international affairs in the post-election period. More importantly, the election manifesto itself, after fifteen years of AK Party service in Turkey, demonstrates the very nature of the transformation of Turkish domestic and foreign policy, and underlines the changing nature of Erdogan’s way of doing politics and foreign policy. The foreign policy framework that appeared in the President’s speech on Sunday is significant for three reasons. Firstly, it symbolizes the emergence of a new Turkish foreign policy identity. Secondly, it indicates the new realist approach to Turkish foreign policy strategy, and lastly underlines the foreign policy practices that will be carried out in the future.

Foreign policy identity has always been a contested issue in the history of Turkish foreign affairs since the early republican era. The pre-2002 formulation of Turkish foreign policy has been constructed around the securitized Kemalist westernization project, homogenized the nation-state discourse, and marginalized the neighboring geography, particularly in the Middle East. The emergence of the AK Party fundamentally transformed the very nature of the Turkish foreign policy identity and reformulated it within the context of a liberalized internationalization project (it was not necessarily a westernization project), democratized the nation-state discourse (freedom from assertive nationalism), and desecuritized the political geography around Turkey. The new Turkish foreign policy approach invented around the idea of civilizational interaction, which has undergone transformation again because of the new security landscape that emerged following the Arab uprising, as it forced Turkey to obtain a new foreign policy approach mainly based on state-centrism.

President Erdogan’s election manifesto strongly underlined the necessity to become a strong state, not only a state in which institutional resilience is at the center, but also a state that has the ability to defend itself against regional threats. The foreign policy identity framed by the speech of President Erdogan is not a return to Kemalist foreign policy identity. Rather, it is an identity formulated around the idea of threat perception not only emanating from terrorism but also coming from the changing nature of Turkey’s interactions with the Western world. It is a product of the conversation between classical nationalism and new conservatism influenced by the rise of a new survival anxiety. The West is no longer a complementary component of Turkish foreign policy identity. In fact, the new Turkish foreign policy identity does not coexist with the West, but is a product of the practice of “national-native stance,” for which the West is not seen as an integral actor; rather it is gradually becoming an “empty signifier.” This stance, for sure, is not only valid for the Turkish perception of otherness. It is, in fact, becoming a new reality and integral part of the Western narrative towards Turkey.

The election manifesto does not only symbolize the emergence of a new foreign policy identity, it also underlines the consolidation of the new realist approach in foreign policy strategy. In the history of Turkish foreign policy, decision-makers have always been proud of being realist in terms of preference, without actually engaging in any realist policy toolbox. Turkish foreign policy under the AK Party in the last decade was no exception. However, the post- July 15 Turkish foreign policy formulation situated power as an integral part of its strategy, which was a long-anticipated move. The new realism manifested itself in the election manifesto as a reference point in formulating Turkey’s capacity and potential. While the capacity simply underlines the importance of the material military strength of Turkey, the potential highlights how Turkey can use its material capacity in delivering its new national-native stance. This is not limited to the formulation of power in foreign policy strategy. President Erdogan’s manifesto also emphasizes that unipolarity is over and a new international system is emerging, in which the U.S. is not the only power. This makes Turkey’s new realism approach more important in delivering its national security strategy, particularly in its surrounding regions. The role of Russia and other alternative power centers are particularly significant since President Erdogan strongly underlined in his manifesto that Turkey would work with Russia, Iran, and China just as much as it works with the U.S. and other western countries. This is the new reality for Turkish foreign policy. In this new realist approach, the West is not a reference point solely from a culturist perspective; it is an institutional component of Turkey’s national and regional security architecture.

The election manifesto also gives many clues about how Turkey will put its foreign policy strategy into practice following the elections. There are, of course, many foreign policy issues that President Erdogan has to deal with under the new presidential system. These include the PYD-PKK issue between Ankara and Washington, S-400s, Turkey-EU relations, Syria, the PKK in Syria, and so on. Erdogan’s critique of the U.S. regarding the PYD issue was the main foreign policy theme in his manifesto. Therefore, it will be the first foreign policy test for President Erdogan to see how he will deliver his new foreign policy thinking. On the other hand, the U.S. perspective on Turkey’s S-400 choice as the main air defense system is well known. In the following months, specifically in the post-election period, the U.S. Senate will try to impose a sanction against Turkey even though Trump himself is against it. It will certainly increase the tension between the two capitals. In addition to that, the question regarding Turkey–Russia relations still remains. Erdogan strongly highlighted that Turkey has a foreign policy perspective in line with the Ankara criteria, which will be presented in the AK Party’s election declaration as a Turkey-centered foreign policy.

This time, Erdogan’s way in Turkish foreign policy is a strategy to save the country first and to turn it into a regional powerhouse later on.