Many Pakistanis have witnessed three military administrations themselves; and have praised Erdogan and the public’s success at foiling the July 15 coup. 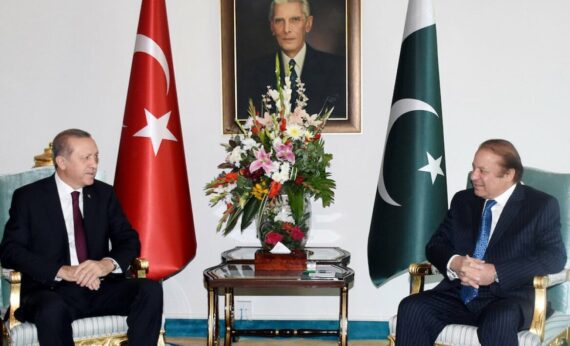 Turkish President Recep Tayyip Erdogan’s two-day visit to Pakistan on November 16 is largely viewed as a fresh move to give impetus to Islamabad-Ankara bilateral ties in trade, defence, education, and other sectors. Next year will mark the 70th year of Pakistan-Turkey diplomatic ties, which Pakistan’s Prime Minister Nawaz Sharif has pledged to celebrate with “zeal and enthusiasm.”

The current trade volume between Islamabad and Ankara is recorded at around $500 million in 2014-15, with exports to Turkey recorded at $309.19 million and imports at $191.05 million, according to Pakistan’s Ministry of Commerce. In August, Pakistan and Turkey agreed to eliminate 85% of tariffs in an attempt to enhance trade, part of a larger Free Trade Agreement (FTA) under negotiation.

Ahead of Erdogan’s visit, Pakistan declined to extend the visas of 108 Turkish nationals and their families, all teachers at a network of private schools with ties to Fethullah Gulen. Turkish officials, including President Erdogan, have been calling for Islamabad to close the Gulen-linked schools for months, saying they were part of a terror organization behind the coup attempt and years of attempts at destabilization in the country, and were a threat to Pakistan as well.

“We have to be very careful with such organizations and their causing risk and threat for the security and stability of every country where they have presence,” Turkish Foreign Minister Mevlut Cavusoglu said in Islamabad this August.

In his address to a joint session of Pakistan’s parliament, the third such occasion, Erdogan expressed his gratitude by saying that “I am thankful for the solidarity demonstrated by the Pakistan on this matter… And for their decisive stance against this organization.”

“It is imperative to dismantle this evil network,” Erdogan said. “The terrorist organization is a threat to the security and public order of Pakistan.”

Islamabad had already set a November 20 deadline for Pak-Turk staff to leave the country. However, Erdogan assured the students who were studying in the Pak-Turk schools would be taken care of with the highest standards, and Islamabad has said arrangements will be made to ensure the schools continue to function, but under a new administration.

Many Pakistanis have witnessed three military administrations themselves; and have praised Erdogan and the public’s success at foiling the July 15 coup. Prime Minister Nawaz Sharif himself was jailed and exiled after a military coup in 1999, after a coup by the head of the military, Gen. Pervez Musharraf. Musharraf, who spent his childhood in Turkey, has repeatedly praised the Turkish military for its role in leading Turkey. Sharif returned from exile in 2007, and months of street protests by his followers and other civilian leaders forced Musharraf’s resignation within a year.

During Erdogan’s visit, Sharif told Parliament the way Turkey “defeated this illegal assault on democracy was remarkable.” In May, Sharif acted as a witness at the marriage of President Erdogan’s daughter in Istanbul, a reflection of the closeness of the two leaders, who head countries trying to emerge from a long history of military interventions.

While political leaders in Pakistan have agreed with Islamabad’s decision to deport the Pak-Turk teachers, some, like Hamid Mir, a political commentator and a senior journalist based in Islamabad, have speculated the actions may have been a product of the Sharif-Erdogan relationship, and that Islamabad and Ankara failed to make a public case for why the steps should be taken.

Erdogan offered support for Islamabad at a time of heightened cross border tensions in the disputed region of Kashmir, where scores of civilians have been killed since September in firing between Pakistani and Indian soldiers.

Referring to the Kashmir issue, Erdogan said the dispute of Kashmir should be resolved by Islamabad and New Delhi in line with UN resolutions and the wishes of Kashmiri people.

He stressed the need for stepped up cooperation against terrorist organizations such as Al-Qaeda and its affiliate Daesh who he said are the agents of the war carried out against Islam.

He pledged Pakistan-Turkey ties would be deepened further through the Strategic Cooperation Council, which was established in 2009 between Ankara and Islamabad.

Since then, both the countries have signed 51 agreements and documents within the council.

Under the new arrangements between Pakistan and Turkey, 500 Pakistani students would be able to go to Turkey for PhD scholarships every year in light of a document signed between Pakistan’s Higher Education Commission and the Turkish higher education body.

Sharif lauded Turkey’s bid for Pakistan to join the Nuclear Suppliers Group (NSG). “Our close relationship serves as a stability factor in the region,” Sharif said of Pakistan-Turkey cooperation.

Pakistan has already applied for the membership of the 48-member organization. Turkey has been supporting Pakistan’s membership in the NSG—the 48-member group, which regulates international nuclear commerce.

Turkey is supporting a call for a criteria-based approach for admitting non-NPT countries.

A statement from the Presidency stated that Erdogan agreed to the idea floated by President Mamnoon Hussain regarding a long-term bilateral defence cooperation agreement.

Islamabad and Turkey are already pursuing a number of defence collaboration projects with Anakara is helping Islamabad with the midlife upgrade of Khalid-Class Submarines and the two sides also collaborated in building a Naval Fleet Tanker.

In addition, Turkey is interested in purchasing MFI-17 Super Mushshak aircraft from Pakistan.

Pakistan’s exports to Turkey are likely to increase by $500million to $600 million in a short span of time. Major trade items between Pakistan and Turkey include fabrics, beverages, spirits and vinegar, plastics, chemicals and machinery.

“In the next few years, with the passage of time trade and commerce relations between the two countries will reach new heights,” said Hassan Askari Rizvi, a noted political analyst. Both the leaderships have pledged to expand trade at a time when a number of Turkish companies have been working in Pakistan, he added. ”The relationship is mutually beneficial for both Islamabad and Ankara,” Rizvi concluded.

Rehmat Mehsud currently works with News Lens Pakistan, a wire service based in Islamabad. Formerly, he worked with The Wall St. Journal, The Globe and Mail, and Pajhwok Afghan News, a wire service in Kabul, Afghanistan.