At the end of the visit, Erdogan shared his thoughts on Twitter: "I would like to thank all the leaders with whom we have discussed many issues, from the global economic situation to the Syrian issue, from the development of Africa to the economic and political relations we are developing with Asia." 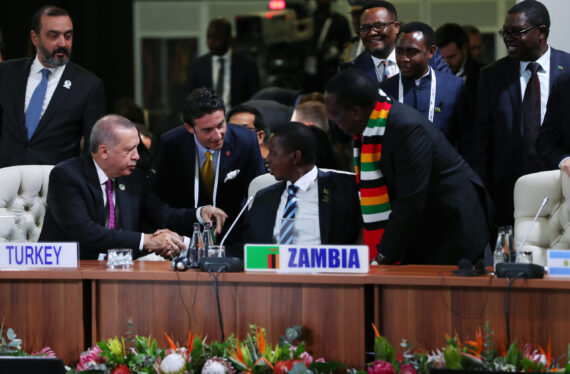 President of Turkey Recep Tayyip Erdogan made a 4-day official visit to Africa starting from July 25 on a special invitation.

Erdogan was invited to the 10th Brazil-Russia-India-China-South Africa (BRICS) Summit in Johannesburg, South Africa as the Chairman of the Islamic Cooperation Organization,

He held bilateral meetings with the leaders of BRICS member states and other leaders who were invited.

Erdogan’s attendance at the summit served as the first high-level contact between Turkey and the BRICS. Bilateral relations and regional issues were discussed during the visit.

On his last day in the African continent, President Erdogan, made a special visit to Zambia, which marks a historical day as the first visit of the Republic of Turkey on a presidential level.

Erdogan also met with his counterparts from South Africa, Togo, and Angola in Johannesburg.

At the end of the visit, Erdogan shared his thoughts on Twitter: “I would like to thank all the leaders with whom we have discussed many issues, from the global economic situation to the Syrian issue, from the development of Africa to the economic and political relations we are developing with Asia.”

“We are aware that FETO is working to charm the Muslims in the Republic of South Africa into siding with it. Don’t you ever be deceived by the rhetoric they employ and the disguise they wear! Hypocrisy and deception are the tools they use most conveniently.”

“We met with important investors and business people operating in South Africa and exchanged ideas for the development of our relationships on the basis of a win-win approach and equal partnership.”

Africa was President Erdogan’s first visit abroad (if visits to the Turkish Republic of Northern Cyprus and the NATO summit are excluded) after his victory in the July 24 presidential and parliamentary elections.

This was considered as a sign for better relations in the future that will continue to develop.

The BRICS group – made up of Brazil, Russia, India, China and South Africa – was established in 2006 to enhance cooperation between member countries and also other developing countries.

All 5 member states are also part of the G20.

The special invitation that Turkey received to attend the BRICS summit in South Africa and the fact that Turkey will also join the meetings of the ‘BRICS Plus’ platform, is considered to stem from the nature of the country’s emerging economy.

BRICS has three common characteristics besides representing emerging countries and emerging markets; high growth rates, potential forces in the global system, and their noteworthy locations in line with their regional dynamics.

BRICS covers a large area – ​​one fourth of the world’s surface – represents more than 3 billion people (roughly 40% of the world population) and covers 20 per cent of the world’s production, equaling about 17 trillion dollars of gross domestic product per year.

The result of a possible relationship to be developed between Turkey and the BRICS will strengthen Turkey’s hand in terms of its position in the global political system.

The visit to Zambia is the first visit made to this country at a presidential level.

This visit was of special importance especially for Turkey’s relationship with sub-Saharan states and for the further development and opening of new areas of relations with African countries.

The trade volume between Turkey and Zambia still remains at a considerably low level of approximately $25 million.

The steps to be taken in a medium-term and the projects to increase trade figures were discussed during the meeting.

Turkey promotes Zambia’s development in various fields through TIKA and aims to build relations with Africa were both parties “win together.”