The ex-chief criticized the selective approach to terrorist organizations, stating that “All terrorist groups must face the same treatment and position without any exceptions in the fight against terrorism.” 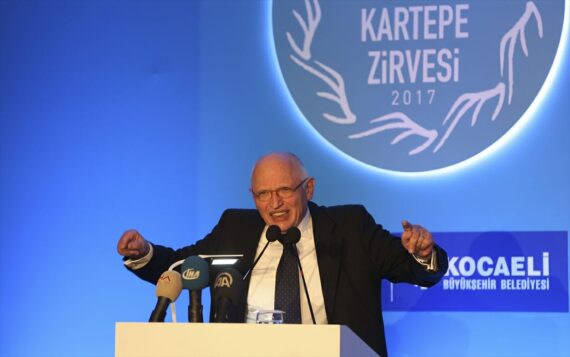 While the relations between the European Union and Turkey have been sore for a while, talking to Anadolu Agency during the ‘International Symposium on July 15 and Coup D’etat – Global Impacts, Media and Democracy’ summit in Kocaeli, northwestern Turkey, ex-enlargement chief Gunter Verheugen criticized the EU for their attitude on Turkey’s membership.

Former enlargement chief also criticized Europe’s tolerance for terror groups, such as the PKK, which have targeted Turkey, stressing that the future of both the EU and Turkey are intertwined.

Having served as EU commissioner for enlargement from 1999-2004, Verheugen stated on Friday that “Turkey belongs to Europe and no-one can change that. Thus, Turkey’s and the EU’s future are parallel and indexed to each other.”

Addressing recent incidents of PKK supporters demonstrating in European cities using terrorist images with impunity, including a mass show at Cologne, Verheugen said: “Believe me, it also shocks me how the PKK could freely spread propaganda, mount protests, put up posters, and hang banners in Brussels and other European cities while the police disregards it and doesn’t intervene.”

The PKK has waged a terror campaign against Turkey, which has up until today led to the death of over 40,000 people – security forces and civilians alike – including over 1,200 people since July 2015 alone.

The ex-chief criticized the selective approach to terrorist organizations, stating that “All terrorist groups must face the same treatment and position without any exceptions in the fight against terrorism.”

He also warned that Turkish-EU relations may further “deteriorate” in the near term, citing worsened relations between the bloc and Britain, as seen in the Brexit process.

“It’s clear that Brexit hasn’t brought any sort of benefit but from a long-term perspective, I must say I’m optimistic [for Turkey]. In my opinion, if we’re discussing the EU’s future and evaluating its situation under a united EU, then the only situation we can see is Turkey’s EU membership.”

“We can discuss two scenarios. Under one, the EU is forced to accept Turkey after a certain process. Under another, [the EU] analyzes and understands the situation thoroughly and makes a decision regarding Turkey at once without being forced to do so. I hope the second happens. Turkey belongs to Europe and no one can change that,” he said.

“We are happy that Mr. Steudtner came back home,” Adebahr said.

“Our foreign minister clearly said that the German government remained interested in a dialogue with Turkey and improving relations between the two countries,” she added.

Steudtner and seven other suspects were arrested in July in Istanbul during a “digital security and information management” meeting, on suspicion that they were aiming to incite violence and chaotic mass public protests.

Also Read
Turkey’s threefold fight against FETO, DAESH, and the PKK continues
We use cookies to optimize your online user experience. To learn about our use of cookies and how you can manage your cookie settings, please see our Privacy Policy. By continuing to use our site you are excepting our use of cookies.Accept Cookies & CloseMore Info