The European journey turned out to be an anathema for Turkey that paradoxically is set to stand on the door for a little while longer. In the deadlock negotiation, a new element affects the relations: the rising European far-right that most probably would harm any further enlargement towards Ankara. 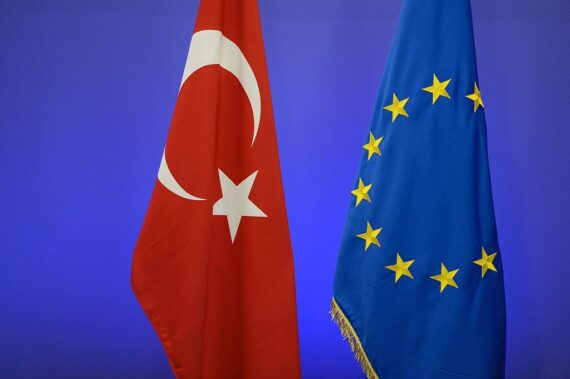 The Turkish national flag (L) and the EU flag are pictured ahead of a summit on relations between the European Union and Turkey and on managing the migration crisis, on November 29, 2015 in Brussels. Getty Images

“Turkey’s accession negotiations have effectively come to a standstill no further chapters can be considered for opening or closing and no further work towards the modernization of the Customs Union can be currently foreseen. The Turkish government’s repeated commitment to the objective of EU accession has not been matched by corresponding measures and reforms since then, and the EU’s serious concerns on continued negative developments in rule of law, fundamental rights and the Judiciary have not been addressed.” With those words, the Progress Report 2019 clarifies the status of the European accession process for Turkey.

This year the term ‘backsliding’ appears very often and it is related to 29 points mainly referring to the content of the rule of law, freedom of expression, effectiveness of the presidential system and to the state of the Turkish economy. Latest, it underlines serious concerns for the electoral process namely referring to Istanbul re-run elections. Beside that, when it comes to further topics they are described as “worrying” while the EU acknowledges the “outstanding efforts” to host 3.6 million Syrian refugees. Perceived as the worst report since the beginning of the accession talks, it has been rejected by Turkey for some “unfair and unbalanced criticism”. On careful observation, however, the statements do not surprise as much as they reflect the lowest point ever reached in the long and thorny negotiation journey.

For a long time, relations between Turkey and the European Union have been affected by a lack of mutual understanding and related accountability. In the recent years, the frustration characterizing both sides has given rise to a sort of deaf communicability culminated with the block of the negotiation talks by the European parliament (EP). This move was echoed by Turkish President Erdogan who stated that he might consider putting Turkey-EU accession to a referendum, as a sign of protest against the European bias and unfairness towards Turkey.

In recent years, the frustration characterizing the EU – Turkey relations has given rise to a sort of deaf communicability.

Indeed, the redundant EP declarations were both unnecessary and harmful: unnecessary because the accession got stall since its very beginning and harmful because they threw further negativity on the already complicated relationship. While Turkey’s accession to Europe is the result of a historical process that began in the 60s along the Ankara agreements and has continued until today, no one can ever doubt the benefits of joining the EU. In 2005 when the negotiation officially started, Turkey marked the greatest closeness point to Europe, but soon the enthusiasm cooled down not only because of the domestic issues Turkey had to face, but also for the hostility shown by the Franco-German bloc within the Union.

Undoubtedly, those were the years the limits of the reforming liberal policies began to arise, leaving rooms for some criticism towards and from Europe. Since then it has been clear that mainly due to the opposition of some EU Member States, the European pact was affected by a sort of lack of perspective, which contradicts that pacta sunt servanda principle as core of any fair agreement.

Then as today, the Turkish disappointment is not entirely reprehensible, if we consider that out of thirty-five negotiating chapters Turkey has opened only sixteen and closed just one while the remaining are blocked by the veto of Cyprus and other member States. In this regard, it has to be stressed that although in 2004 Turkey and the Turkish-Cypriot side supported the solution offered by the Annan Plan, they had to face not only the intransigence of the Greek side, but also the annexation of Cyprus as a full EU member. Along such a political distortion, instead of full membership, some European states proposed a new “privileged partnership” formula, which undermined further the credibility of the accession process. This has created a certain distance with Brussels by nurturing the feeling that Europe is like a teacher with a red pen ready to judge without empathizing and unable of any self-criticism.

Despite the tensions and the difficulties in mutual understanding, nowadays Turkey and Europe still need each other.

Paradoxically, even if today Turkey did not have any issue related to substantial democracy and everything worked very well domestically, the pitfalls of the so called ‘Cyprus issue’ would prevent the opening of several negotiation chapters, including the most sensitive ones concerning the rule of law. These formalities are of crucial importance to catch the obstacles encountering in an already compromised path. Moreover, the 15 July failed coup attempt marked a further dividing line. Despite the dramas that a coup attempt brings with itself, some European states had some difficulty in expressing their solidarity to the Turkish government, shattering the Turkish- European talks. In the recent years, the common messages addressed to Ankara stated a more and more increasing concern about the democratic deficit of Turkey while on the other side the Turkish discontent had developed further along the fact that no Progress Report had classified FETO, the perpetrators of the coup attempt, as a terrorist group.

Nowadays, despite the tensions and the difficulties in mutual understanding, Turkey and Europe still need each other. The greatest effort in hosting the refugees, which started unilaterally much before the March 2016 migrant deal with the EU, gives a huge contribution in stemming the irregular migration flow across the Aegean Sea and in contrasting human traffickers. At a time when the migrant issue is dividing Europe, Turkey itself improved the life conditions for more than three million Syrian refugees who found shelter in its territory.

As one of the greatest worldwide donors and key players in humanitarian policies, Turkey contributes a lot to contain the immigration flows towards Europe.

In other words, as one of the greatest worldwide donors and key players in humanitarian policies, Turkey contributes a lot to contain the immigration flows towards Europe. However, one of the conditions of the 2016 deal has foreseen for Turkey an acceleration in the accession process and the visa liberalization for the Schengen area, to be provided once Ankara would have fulfilled the 72 requirements set by Brussels, including “the revision of the legislation and practices on terrorism according to European standards “. Yet, this is a crucial point for Turkey, which is engaged on several fronts in the fight against terrorism, from PKK, Daesh and FETO. Here comes another contradiction: Turkey is still the only candidate country that does not have a visa liberalization agreement with the EU with related discomfort and frustration of Turkish citizens – and among them the businesspersons who encounter constant difficulties in accessing European countries that are the first destination of their exports.

Unfortunately, the European journey turned out to be an anathema for Turkey that paradoxically is set to stand on the door for a little while longer. In the deadlock negotiation, a new element affects the relations: the rising European far-right that most probably would harm any further enlargement towards Ankara. Under the new nationalist and chauvinist wave, even the historic supporters of the Turkish membership may gradually lose interest, harnessed in their internal political and economic problems and in their anti-immigration rhetoric.

Today it is more and more common to come across comments portraying Turkey as ‘no European country and it will never be’ legitimized by some political manifestos calling for a revival of the European spirit on original identity basis. Likely, in what seems a very fragmented Europe, along its duty as the body designing the strategic agenda and priority areas for longer-term EU action, the European Council would hardly reach the unanimous decision to abandon the accession negotiations.

There is an urgent need to rethink and review the Customs Union agreement between Turkey and the EU.

As it has been stated several times by both parts as well as in the report just released, thanks to their geographical proximity, the millennial historic-cultural relations and the increasingly close intertwining of the economies, the alliance between Ankara and Brussels remains strategic. Thus, in front of the escalating violence in the MENA region and the related foreign fighters and migration emergency, cooperation is imperative. Moreover, even though they depend heavily on the political factor, mutual economic relations have great potential for further development. Since the entry into force of the Customs Union in 1996, the value of bilateral trade has more than quadrupled as well as European direct investment to Turkey.

Nowadays there is an urgent need to rethink and review the agreement, which still excludes major sectors, including services and agriculture, which are respectively 60 percent and 10 percent of Turkish gross domestic product – and public procurement. Indeed, barrier regulations, the high average rate of the most favored nation and the politics of price regulation hamper imports of agricultural products from Turkey.

An efficient update requires the elimination of asymmetric relations between Ankara, Brussels and third countries as well and the establishment of a mechanism for resolving disputes and controversies. Despite the failure to revise the customs union, the Turkish and European economies are strongly integrated at a commercial level. As assumed by the liberal logic, those interconnections are the source of indissoluble interdependence. Therefore, besides being the main interlocutor to face all the thorny issues that knock on the door of the Old Continent, it is impossible to deny that Turkey is already in Europe. Hence, in a win-win perspective the revival of the reformist spirit is the engine to re-launch a positive dialogue with the bloc and to build mutual trust.