If the EU insists upon the revision of Turkey’s anti-terror laws, while the country is fighting against terror groups such FETO, DAESH and the PKK/PYD, it will not be surprising to see a cancelation of the readmission agreement between Turkey and the EU. 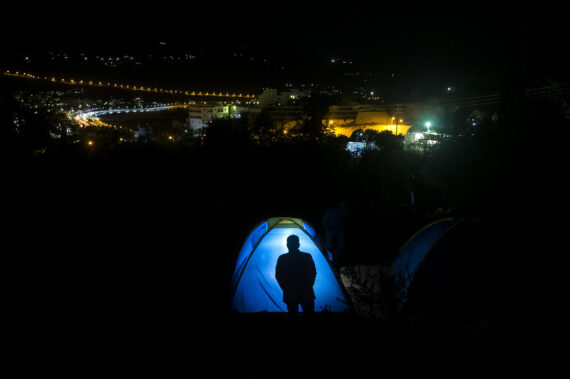 A silhouette of a refugee is seen behind of a summer tent in a forestland in Samos, Greece on October 8, 2017. Anadolu Agency

The famous European Union-Turkey deal, based on the Joint Action-Plan (JAP) pertaining to the readmission of irregular migrants to Turkey, has sparked off debates around the new EU strategies on migration management. Its implementation and commitments, in a way, directly affects EU-Turkey relations that have followed a fragile line for a long period.

In the agreement, Turkey has been demanding €3bn + €3bn funding allocated for the expenditures of Syrian refugees hosted in the camps located in different cities across the country. In return, it was predicted that EU countries will implement a visa exemption for Turkish citizens in the following months. Regarding the deal, Turkey has pledged to cooperate with the EU in order to disrupt human-smuggling networks, thereby curbing the massive migrant flows into Europe.

On 18 March 2016, the EU and the Turkish delegations agreed upon the cooperation for struggling with irregular migration. Accordingly, as of 20 March 2016, it was decided that “all new irregular migrants crossing from Turkey to the Greek islands will be returned to Turkey.” For every Syrian migrant being returned to Turkey, a Syrian who fulfills the conditions for international protection will be resettled in an EU member country. That’s why this is also known as “the 1:1 deal.” In doing so, Turkey has pledged “to take any necessary measures” to eradicate the irregular migration in the Aegean Sea.

With the agreement, the EU would allocate €3 billion under the given financial aid program – the Facility for Refugees in Turkey. Once these funds are entirely spent, the EU also pledged to mobilize an additional €3 billion to the end of 2018. The most significant article of the agreement was the most disputed, in return for the cooperation, Turkey’s visa liberalization roadmap would be accelerated with a view to lifting the visa requirements for Turkish citizens.

The visa liberalization roadmap was bound to a list of requirements that are expected from the Turkish counterpart to fulfil them. The long list of 72, including 5 major political and technical arrangements were involved in changing the anti-terror laws. Three points are listed as “not fulfilled” in the EU Commission document published on 6 September, “Seventh Report on the Progress made in the implementation of the EU-Turkey Statement.” There are technical points such as applying biometric technology compatible with the EU standards, pursuing cooperation with Europol and the European judicial authorities, some reforms on personal data protection, and fully implementing the readmission agreement. However, the EU requested two other controversial points such as measures against corruption and revising the anti-terrorism laws, that means too much interference within a country’s domestic policy especially one that fights against several terrorist organizations.

Despite the disagreement on the defined sine qua non reforms, Ankara did not refrain from discharging its duties under the agreement. On April 4, 2016, the readmission plan began to be applied between Greece and Turkey, so that over 200 refugees were sent back to Turkey under the plan. A week after the activation of the plan, the-then Prime Minister Ahmet Davutoglu reminded the commitments under the deal to his European counterparts: “I maintain my belief that, God willing, we will have the visa exemption in June. In the absence of that, then, of course, no one can expect Turkey to adhere to its commitments.” Similarly, the Minister of Foreign Affairs, Mevlüt Çavuşoğlu underlined that the EU needs Turkey in order to stem the tide of massive migrant flows.

Nowadays, with the many successful maritime operations by the Turkish Coastguard, the figures dropped down to 24,739 in 2017, as of 5 November. This number was 173,450 in the erstwhile year, while over 1 million people were reaching the Greek islands via Turkey in 2015. Germany saw a 69% drop in the numbers of migrants arriving the country, partially thanks to the working of the deal thereby closing the Western Balkan route.

Would the deal be cancelled?

As of 4 September 2017, the total number of Syrian refugees resettled from Turkey to the EU under the 1:1 scheme was 8,834. This year, Turkey has submitted to the United Nations High Commissioner for Refugees a new referral lists with almost 23,500 persons to be resettled.

In the EU’s perspective, it is hard to describe the EU-Turkey deal as a dead duck considering these outcomes. However, since none of Turkey’s demands have been implemented yet, it can easily be conceded as a dead-duck agreement. The right to cancel the agreement has been reserved to the Turkish part, without any explanation. So, when taking into consideration the recent statements from Turkish officials, the possibility of cancellation seems not so far away: “We may cancel the readmission agreement. The EU has been wasting our time on the visa liberalization issue. We are not applying the readmission agreement at the moment, and we are evaluating the refugee deal,” said Mevlüt Çavuşoğlu. Similarly, President Recep Tayyip Erdogan warned the EU as they could forget about Turkey re-admitting asylum seekers. Recently, during a trade visit in Poland, he said the EU had “only sent €885 million of its promised €3 billion plus.”

Just after 4 months of signing the agreement with the EU, Turkey witnessed a coup attempt, which left 249 dead and thousands injured. During this period, it became clear that the requirement of revising anti-terror legislation was not to be in consideration. While Turkey is in a fight against the Fetullah Terrorist Organization (FETO), which orchestrated the coup, the country remains fighting DAESH and the PKK/PYD – a struggle in which its European neighbours and allies have not supported. Therefore, if the EU insists upon the revision of Turkey’s anti-terror laws, it will not be surprising to see a cancelation of the readmission agreement.