Formalisms aside, Turkey is already in Europe, not only by its geographical location, but also thanks to the mutual strategic interests that keep the two partners connected. 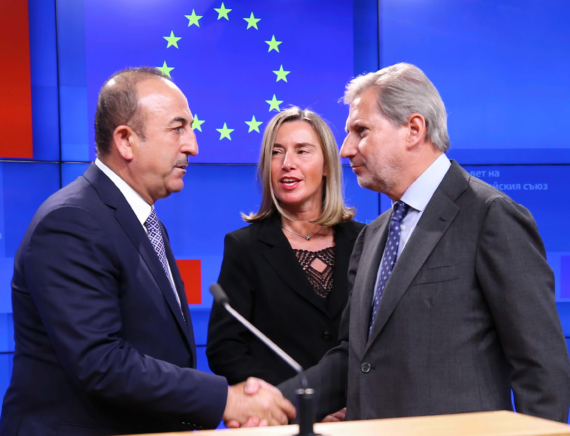 In politics the term ‘security’ has traditionally related to issues of stability, conflict, peace, and diplomacy. However, in a globalized environment the concept has broadened further to include relations among world governments. These relations between states cannot be understood in isolation as they closely connect several actors such as states and international organizations; social structures and processes such as economies, culture, and policies, and geographical and historical influences. To some extent, Turkey is emerging as a “pivot state” – as it has strategic assets and it is located at a seam of the international system – due to its ties with global actors. Among these, the European Union is the most important. The first institutional links between Turkey and the EU date back to the 1960’s, which later led to Turkey gaining status as an EU candidate state at the Helsinki Summit in 1999, and to formally start negotiations to become a full EU member in 2005.

The process of EU membership has been slow and difficult and Turkey has encountered a series of obstacles contradicting the spirit of negotiations. As is well known, the main problem on the path towards EU membership has been the attitude of Europe. Mainly due to the negative stance of some member states towards Ankara, and the difficulties of opening up further chapters in EU negotiations. Formalisms aside, it is unequivocal that Turkey is already in Europe, not only by its geographical location, but also thanks to the mutual strategic interests that keep the two partners connected. In this regard, the Turkish side has often stated that “the security of Europe starts from Turkey”. On closer inspection there are many reasons supporting this thesis, and considerable points which prove how much Turkey and Europe need each other.

First of all, it is worth underlining Turkey’s commendable policy of hosting Syrian refugees. Turkey is considered to be one of the biggest humanitarian donors and key policy-makers towards Syrian refugees. Thanks to its spirit of brotherhood, Turkey today hosts more than four million refugees. This was a responsibility which began much earlier than the March 2016 agreement with the EU, which specifically aimed to stem the irregular migration flow across the Aegean Sea, by adopting more stringent measures against human traffickers and by improving living conditions for the Syrian refugees in Turkey. This important responsibility was undertaken on a voluntary basis by Turkey, and the “good progress” of migration and asylum policies are reflected “in the drastic reduction of migrants at sea”, as acknowledged by the EU. Moreover, a recent Amnesty International report even states that in 2015 the number of refugees that arrived on the Greek islands were about 800,000, while in 2017 the number dropped to 27,000.

However, one of the conditions of the EU refugee deal was a promise by the EU to accelerate Turkey’s membership process and the liberalization of entrance visas for Turkish citizens to Schengen passport-free countries. However, Brussels has not fulfilled its side of the agreement while Turkey continues to bear the weight of a large number of refugees, a number which may increase even further in the face of possible military escalation in Syria.

The situation in Syria’s Idlib may further complicate the issue. In the beginning through a combination of diplomacy and political effort with Russia, an agreement was made to prevent a new flow of people from Syria. Nowadays, there is room to be concerned. If the situation in Idlib were to get out of control, an exodus of about three million people is expected, including some 3,000 terrorists, whose first landing would be the Turkish border. Therefore, the establishment of a safe zone in Syria becomes vital in protecting the integrity of Turkey – against human trafficking, foreign fighters and terrorists – and consequently for the interests of Europe as well.

As the huge flow of irregular migrants was something that nobody had foreseen in Europe, the EU’s response reflected this unpreparedness as well as the general unwillingness to host a large number of refugees. Europe’s approach towards the issue may continue to develop even more negatively, especially in a time when the influence of the far-right is increasing and anti-immigrant stances are more commonplace. While Europe has demonstrated its inability to find solutions to cope with the migrant flow, Islamophobia, nationalism, racism and other forms of xenophobia breeds suspicion among citizens. Hence, the main problem in the EU, beside its political cohesion, is related to social solidarity, and to debates over the identity of the “Old Continent”.

Besides that, there is a feeling that Brussels is sort of dictating and patronizing some core policies by managing the lines of agreements, without keeping promises or eventually making them discretionary. Europe was born as a peace project; it helped to develop countries, to integrate economies and to accommodate minorities, but nowadays is not responding to the requests of Turkey, and the EU seems to be a victim of a lack of vision.

Turkey and Europe is economically complementary

On the other side, economically speaking, the complementarity of Turkey and Europe is notable. For Ankara, the biggest trade flow is with the EU and this is a factor that cannot be denied. Turkey stands as one of the most valuable partners with its population of 85 million people, a young population and growing economy. From the European perspective, there is a deep trust towards the Turkish market and its resilience in coping with crisis. In a time of trade wars and the instability of global order, Turkey is for Europe a guarantor of economic stability and as a center for investments thanks to its role as a regional and international hub.

Furthermore, China’s expansionism along the Belt and Road initiative may make Ankara a worthier partner to Europe. The Chinese project aims to build both a terrestrial corridor across central Asia and a maritime corridor across the Indian Ocean and Africa. In order to do so, it requires investments on railways, ports, roads, telecommunications, and energy grids of 1,000 billion dollars in over 70 countries. Beijing has already signed several agreements in Europe, despite the suspicion of the EU that in recent times stated that “China has become a systemic adversary who has different models of governance” therefore, Europe needs to “defend its own principles and values”. Nevertheless, Turkey looks at China with more positive eyes as their relations are long-standing and have recently intensified. Currently, around 800 Chinese companies operate in Turkey; already solid on a banking and commercial level, relations are destined to consolidate in infrastructure and industrial projects. Indeed, as a bridge between Europe and Asia, Turkey occupies a strategic position, which can be useful to help mediate between Europe and China, and to bring Chinese investments to the West.

Although Turkey does not produce energy thanks to its geography and good relations with neighbors, Turkey has a significant strategic role in transporting resources to Europe. Indeed, Europe gets 30 percent of its gas from Russia therefore their relations are symmetrically interdependent: the EU is heavily dependent on Russia for its energy needs and Russia supplies the European Union with over 35 percent of its crude oil imports and 30 percent of its natural gas imports.

In order to develop alternatives to Russian gas and oil, the EU previously tried to promote the development of a southern energy corridor aimed at connecting European markets to natural sources of gas in the Caucasus, Central Asia and Middle East. This project, however, was not able to find adequate sources of supply thus in an alternative, the EU gave its support to the Trans Adriatic Pipeline (TAP). This will be connected to the Trans Anatolian line (TANAP), which transports gas from Shah Deniz through Turkey to the Greek-Turkish border. From there it will be conveyed from Greece and Albania, across the Adriatic Sea to Italy and to the rest of Europe. The implementation of TANAP has the capacity to have a great impact on Turkey’s role as a pivot country for the southern corridor as well as for the energy security of Europe. In any case, serious criticism and concern remain regarding the most recent hydrocarbon activities around the island of Cyprus, and where cooperation seems to be more difficult as the EU acts primarily in the name of Greek Cypriot interests, neglecting the right of the Turkish community.

These are all significant pieces of a mosaic whose final design is the close interconnection of Turkey with Europe. Turkey and the EU draw together as guarantors of security encompassing military issues and regional stability and their social and economic issues. In a globalized world, the safety of one actor entails the stability of the other. In addition to the real politic, what matters is building relationships of trust and confidence with actions. Until now, Turkey has proven to be a generous and reliable partner as well as a security provider, in this role, it has taken some responsibilities almost unilaterally. Unfortunately, the same is not so for Europe, who are unable to see that the price of not having Turkey would be very high.