The discovery of missiles and a large stock of weapons in the hands of neo-Nazis have to ring warning bells all over Europe. A genocidal and monstrous ideology is making a come-back in Europe and America – thanks to far-right populism – and its consequences would be far-reaching and calamitous. 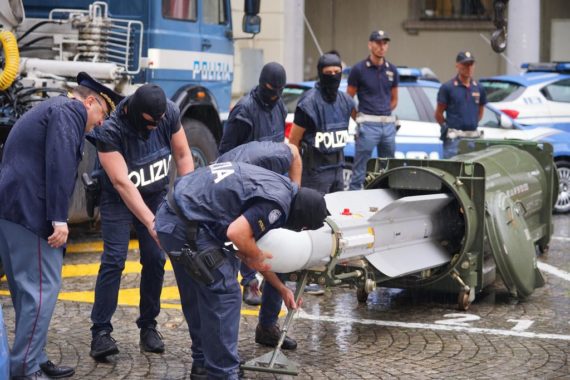 Anti-terrorist police officers in Italy inspect an air-to-air missile seized during an operation against far-right extremists in Turin, Italy. Shutterstock

In the early mornings of Monday, July 15, Italian elite police raided and searched several properties across northern Italy. The targets were houses believed to be resided by neo-Nazi groups and their members. In the northern city of Turin, a region economically well-off compared to the austerity ridden south, the global media was treated with staggering and unnerving images of missiles and Nazi memorabilia. When the raids were concluded, the police gave precise numbers of the arsenals of weapons recovered: a Mantra air-to-air missile; 26 automatic guns; 20 bayonets; 306 gun parts; and 800 bullets of different calibres – all from manufacturers and sellers in France, Austria, Germany and the U.S.

Three individuals were arrested. Moreover, the police stated that the investigation is not yet conclusive or over – more raids and arrests could be carried out across Italy and possibly in other European countries too. Fabio Del Bergiolo, an Italian politician who ran for the senate on the far-right Forza Nuova Party ticket, and two Swiss citizens Alessandro Monti and Fabio Bernardi were arrested. The Italian police stumbled on these extremist groups while investigating citizens who travelled to Ukraine and fought alongside the Russian-backed separatists in the Donbass region – There is a ‘‘strange’’ love relation between far-rights and Vladmir Putin’s Russia. However, these investigations and discoveries of arsenals of ammunitions in the hands of Nazi sympathisers and far-rights extremists showcase a Europe descending into rancid ethno-nationalism and outright fascism. More importantly, across the globe, and particularly in the west, a new political undercurrent is emerging: a politics spearheaded by ‘‘strongmen’’ embodying white-supremacy and contempt and hatred for Muslims, Jews, Women and African immigrants.

The rise of the politics of hate

Michael Perlman’s movie The Politics of Hate (2017), delves into and investigates the rise and thriving of far-right parties in Europe and America. Although these extremist parties gained political relevance recently, after the 2015 so-called migrant crisis, they have always been part and parcel of Europe’s political landscape. Attacks on Asian, African and Turkish immigrants have been recurrent in places like the UK, Netherlands and Germany throughout the 80s and 90s. The 1993 arson in Solingen, Germany, where women and young girls were killed by far-right extremists is a case-in-point. Violence, hate crimes and racism aren’t a new appalling phenomenon in Europe – and cross the world. Nevertheless, in the last decade, far-right parties and their political mantras have become mainstream and established in Europe and America. Today, some of them have missiles (and God knows what else). And that is scary.

Steve Bannon toured Europe to spread his gospel of white supremacy and far-right politics. The essence and tone of his speeches are reminiscent of those delivered from the pulpits of the genocidal führer.

The number of far-right attacks in Europe have increased drastically over the years. According to the Global Terrorism Index, 47 attacks have occurred in Europe in 2018 carried out by “lone actors with far-right, white nationalists or anti-Muslim beliefs.”. Briton Darren Osborne drove a van into Muslim worshipers; attacks on Synagogues and Kosher restaurants have increased in France; Brenton Tarrant massacred Muslim worshipers in New Zealand; and above all, Italy’s notorious deputy premier and minister of interior, Matteo Salvini, faces charges of abducting African immigrants. The rise of far-right politics and populism in Europe could have its roots in the full-of-blemish democratic institutions in Europe and America, and the economic down-turn since 2008, but the hatred and violence unleashed against Muslims, Jews and African immigrants reflects a dangerous past in Europe that is reminiscent of the 1930s – of racism, xenophobia and scapegoating psychology.

Steve Bannon, Donald J. Trump’s white house chief strategist, toured Europe to spread his gospel of white supremacy and far-right politics. “The Movement,” Steve Bannon’s Brussels based “political vehicle” is dispersing and sprinkling hatred and violence across continental Europe– and far beyond; including in far places like India and Myanmar. Alison Klayman’s documentary The Brink (2019) follows Steve Bannon for 13 months across Europe as he gave talks to European far-right groups and populist Euro-sceptics. The essence and tone of his speeches are reminiscent of those delivered from the pulpits of the genocidal führer. His impact on the rise of these extremist groups and there subsequent violence against minorities is beyond doubt. In doing so, Europe’s far-rights and neo-Nazis are drinking from the fountains of the virtuosos and wizards of racism, hate and violence: Bannon et al.

Football fans and their extreme variants – Ultra-fans and Hooligans – are usually susceptible to violence and hate speeches during and after games. In Europe, a continent where the sport is prominent and a multi-billion industry, football stadiums have become breeding grounds of racism, xenophobia, Islamophobia, and sexism. Recently, far-right groups and neo-Nazis are increasingly recruiting their members from football fans and hooligans. Moreover, these trends – of radicalising young white males into extremist ideologies – are also documented in violent video games circles and “dark” chat rooms and troll networks. All over Europe and America, Steve Bannon claimed, is full of many white young males immersed in virtual realities of video games and violent hooliganism, that are susceptible to join or sympathizes with his political projects. He boasts of utilizing the “monster power”: the underground worlds of video gaming and violent hooliganism.

Neo-Nazism is thriving in the virtual world of video gaming. Steve Bannon himself gave an opening speech in the International Conference on Advances in Computer Entertainment Technology, an annual academic symposium on the subject – and it attracted its own share of controversy and criticism. Bannon and his counterparts in Europe are aware of the utility of the video gaming world and football hooliganism: that they are social networks with their own sub-cultures. More importantly, its members are mainly young, antisocial, disillusioned, socially disenfranchised and suicidal white males – and they are angry and aggrieved. So, the spread of racism, hatred and violent sentiments in these virtual echo chambers is easy and equally guaranteed. Nazi paraphernalia and racist trope are common among football hooligans, video games and in “dark” web chats.

We live in a post-normal time posits Ziauddin Sardar, the post-normal conditions intellectual and writer: in a world where ideas – some violent – move with speed and simultaneity. Neo-Nazis and far-right extremist groups are capitalizing on the networked, interconnectedness and chaotic nature of technology and video gaming to legitimate and spread their ideologies – so far they are successful. The discovery of missiles and a large stock of weapons in the hands of neo-Nazis have to ring warning bells all over Europe. A genocidal and monstrous ideology is making a come-back in Europe and America – thanks to far-right populism – and its consequences would be far-reaching and calamitous. The police raids in Turin unearthed a dangerous plot. These weapons could have been used in attacking a mosque, a synagogue, a refugee centre or even an abortion care clinic. Innocent lives would have been ended and families devastated. Neo-Nazi terrorism is an existential crisis to all; it is eroding European core values and moral stands. There threats are real. European governments must take effective steps and actions against neo-Nazi and far-right hate, violence and terrorism.