Turkey’s recent military operation against the YPG in northeast Syria brought to the surface all of the unresolved issues and tensions existing between Turkey and the European Union. 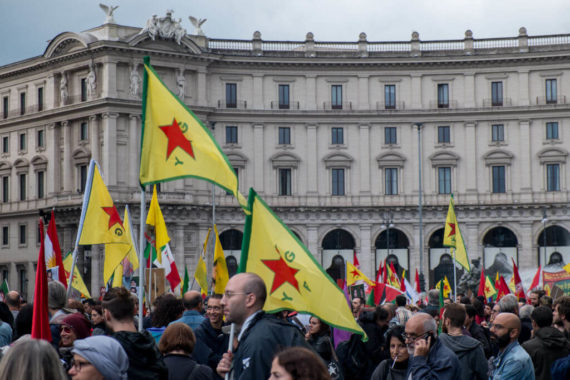 YPG flags being carried by protesters during a demonstration in Rome, Italy on 1, November 2019 Photograph:Stefano Ronchini/SOPA Images/LightRocket via Getty Images

Operation Peace Spring launched by Turkey last month with the aim of securing its border with Syria against the threat posed by terrorist organizations such as the YPG and Daesh aroused very strong reactions in the international community, and especially within the European Union.

Perceived as a sudden invasion, the EU immediately condemned Turkey for its unilateral action. A prompt reaction came firstly from the High Representative on behalf of the EU, calling on Turkey to ‘cease the unilateral military reaction’ and adding that ‘Turkish military action risks to protract instability in northeast Syria, providing fertile ground for the resurgence of Daesh”.

Actually, the EU’s top foreign policy official’s statement echoed what was previously declared by the President of EU Commission, Jean-Claude Juncker, who asked Turkey to “stop operations’’ and stated that “if the Turkish plan involves the creation of a so-called safe zone, don’t expect the European Union to pay for any of it.”

Following these statements, reactions of the individual member states did not wait long. German Foreign Minister Heiko Maas said that ‘the Turkish offensive threatens to cause a new humanitarian disaster … Turkey is willingly risking further destabilizing the region and a resurgence of IS’ (Daesh)’.  The same security concern was shared by the UK and France, whose Foreign Minister Jean-Yves Le Drian urged Turkey to stop the operation as ‘it calls into question the security and humanitarian efforts of the coalition against Daesh and risks undermining Europeans’ security’. Moreover, several European countries summoned Turkish envoys to condemn the military action, Dutch Foreign Minister, representing the general political spirit of the EU, underlined the possibility of a “terrible humanitarian crisis that can trigger new refugee flows and harm the fight against IS and stability in the region.”

At the same time, the main squares of several European cities hosted protest against Turkey, where in some cases YPG flags, effigies of Abdullah Ocalan, and posters in favor of the outlawed PKK have appeared. It was clear an approximate media campaign began to demonize Ankara.

In fact, according to most European observers on Syria, Turkey would have conducted an operation of ethnic cleansing against the Kurds, confirming not only a prejudicial approach, but above all a certain difficulty in understanding the dynamics of the region. It also demonstrated on their behalf the failure of setting a clear distinction between terrorist organizations and the Kurdish population. Furthermore, a narrative of the forced repatriation of Syrian refugees hosted by Turkey has started to become viral.

Although this was the third Turkish operation across the border to guarantee its own security, coming after the operations Euphrates Shield in 2016 and Olive Branch in 2018, this time European leaders and the public opinion reacted almost univocally in condemning Turkey as an aggressor state, marking the apex of a bias and to some extent of a hypocritically contradictory approach.

Indeed, the EU bloc’s foreign ministers pledged to suspend weapons exports to Turkey, although consensus was delayed by the intervention of some voices in the EU such as the UK who supported a softer stance towards Turkey as because as “a key partner of the European Union.”

Nevertheless, EU nations succeeded in banning arms sales to Ankara, marking the first time such a move was made against a partner and a NATO ally. In the same spirit of rare consensus, the European Parliament also voted on a resolution condemning ‘Turkey’s military intervention’ and urging Ankara to ‘withdraw all of its forces from Syrian territory’. The European Parliament also called for “appropriate and targeted economic measures against Turkey” and the freezing of preferential treatment for Turkish agriculture exports to the EU. Moreover, it further called upon the European Council ‘to introduce a series of targeted sanctions and to impose visa bans on Turkish officials responsible for human rights abuses during the current military intervention” adding ‘the suspension of the EU customs union with Ankara’.

Eventually, along with the statements by European MPs referring to the words of the Turkish President Recep Tayyip Erdogan as ‘weaponized’ by threatening Europe with refugees, some other measures aimed at freezing any new funds in support of Turkey for hosting almost four million of Syrian refugees was to be considered, even though it seems unlikely to happen.

As a matter of fact, Turkey’s hospitality towards Syrians has to be considered good practice and an example for the world as from the beginning of the war in Syria Ankara had been taking on the burden almost unilaterally, and much before the March 2016 agreement with EU entered into force. Indeed, it is recognized worldwide that Turkey is one of the biggest humanitarian donors and key policy-makers towards Syrian refugees. In recent progress reports, the EU itself underlined Turkey’s good progress on migration and asylum policies.

Despite migration and refugees being a thorny issue for the EU, it has not yet implemented any efficient policy on this issue.  While Turkey has been treated as a sort of useful tool in containing the flow of refugees and avoiding the spread of social tensions across Europe.

EU nations succeeded in banning arms sales to Ankara, marking the first time such a move was made against a partner and a NATO ally.

However, as in all marriages of convenience, problems arise when conditions are not met. Although the final purpose of the 2016 agreement has been widely honored, there are serious shortcomings in fully satisfying its terms. Ones which contradict the guiding spirit of the international law based on the principle of pacta sunt servanda or simply, deals must be respected.

In exchange for Turkey’s great effort of welcoming and accommodating Syrians fleeing the war, Brussels was to facilitate the visa liberalization process for Turkish citizens within the Schengen area, as well as providing large funds for humanitarian purposes. Both conditions have not been fulfilled by the EU while Turkey has continued to honor its commitments to Syrian refugees and to the European Union.

Along the current operation, fears of new waves of asylum seekers have alarmed Europe and especially those gateway states. Greece and Hungary underlined the need of not being caught off  guard in case new waves of refugees were to occur and called upon additional financial assistance by the EU to Turkey, acknowledging that the 2016 agreement has been the only effective mechanism in coping with the crisis. However, these are isolated voices and the issue is still extremely divisive within the Union. In this regard, the attitude of Brussels and its representatives resembles a capricious child, who gets without being satisfied, blames without taking responsibility, and refuses without proposing alternatives.

This is observed in the tension over the creation of the safe zone on the Turkish-Syrian border as strategically planned by Ankara. A main aim of Operation Peace Spring according to the Turkish government is to establish an approximately 30 km long safe area where a large number of Syrian refugees residing in Turkey would eventually return.

Despite being a complex issue and a fairly ambitious long-term goal, for Ankara this seems to be the only plausible solution to the growing number of refugees, particularly considering its frustration of not feeling sufficiently supported by the international community in responding to  the humanitarian crisis. In other words, Turkey felt alone in bearing the weight of millions of lives and investing billions of dollars in humanitarian aid, and the establishment of a safe zone is vital for enhancing Turkish domestic security finding a lasting solution to cope with the immigration issue, and to restore social cohesion. Nevertheless, the EU Parliament has ‘firmly rejected’ this ambition and it called for a UN-led security zone. The same idea has been endorsed by Germany’s defense minister who proposed sending German soldiers to Syria, an outcome which would further complicate the situation.

In short, Turkey’s operation brought to the surface all of the unresolved issues and tensions existing between Turkey and the European Union and further exacerbated their respective frustrations. Once again it seems that there is merely a chorus of condemnation rather than any attempt to find or implement sustainable solutions for both parties. In this context, ideologically oriented street protests seen in Europe are only one aspect of the serious gap in the relations between Ankara and Brussels, which over the years have been fed by a profound hypocrisy and zigzagging approaches by the EU which goes far beyond the logic of real-politik.