In what has been considered as a “historic” moment on Monday, 23 members of the EU, led by France and Germany, signed a pledge to form a united army. The move has triggered major debate, with proponents calling it as complementary and opponents as competitive to NATO. 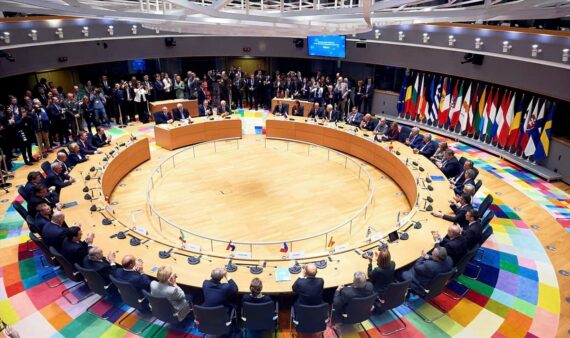 Twenty Three EU member states sign the notification on Permanent Structure Cooperation (PESCO) on the margin of a Foreign Affairs Council at the European Council in Brussels, Belgium on November 13, 2017. Anadolu Agency

Europe is set to form a new army whose membership would encompass, minus Britain, Denmark and a few others, all the European Union states. In what has been considered as a “historic” moment on Monday, 23 members of the EU, led by France and Germany, signed a pledge to form a united army. The move has triggered major debate, with proponents calling it as complementary and opponents as competitive to NATO.

EU Foreign Policy Chief Federica Mogherini stated that “23 member states engaging both on capabilities and on operational steps is something big.” Keeping the door open for those who did not join the army, Mogherini said Pesco, backed by the EU defense fund, “will enable member states to use the economy of scale of Europe and in this manner to fulfil the gap of output that we have.”

The member states’ signatures signify the political will but only legal endorsement, which is expected in December, can confirm the program’s force. Sources within the EU said that the agreement is not just going to be a bureaucratic co-operation, but real investment that will help develop Europe’s defense industry and spur research and development in military capabilities that the bloc needs most.

Though the campaign for joining forces had started in the 1950s, the timing of the agreement is ever more significant. It comes in the backdrop of Brexit, rising right wing forces in Europe, member countries’ dwindling support for NATO and more importantly Turkey’s lack of trust over its NATO partners and warming up of relations between Turkey and NATO’s arch rival Russia. Turkey is the largest man-power contributor to NATO.

The proponent officials such as Mogherini hail the European army arguing that it will be complementary to NATO: “The EU has tools to fight hybrid warfare – the use of conventional weapons mixed with things such as propaganda and cyber-attacks – that NATO does not have at its disposal.”

German Foreign Minister Sigmar Gabriel said that the agreement was “a great step towards self-sufficiency and strengthening the European Union’s security and defense policy – really a milestone in European development.”

Britain, which is set to leave the EU, did not veto the formation of a “permanent structured co-operation (Pesco),” as it has been named, though, as was expected, refused to sign the pledge. Denmark, Ireland, Portugal and Malta also abstained. The fact that Britain did not block the initiative to form a EU army – rather tacitly supporting its formation – is expected to attract furious response from the country’s Brexit supporters.

David Banks of Veterans for Britain had only a few days ago stated that British involvement in the European defense union would sharply undermine Brexit. He emphasized that any form of EU defense unity should not involve Britain as the force would allow the EU to oversee increasingly blurred lines between the armed forces of different states. As a supporter of Brexit, according to Banks, opposition to an EU Army was one of the few things which united “Yes” and “No” voters during the Brexit referendum.