Of course, the threat is not because evangelicals believe in seven curses that will appear as signs of the apocalypse, that the apocalypse will begin in the Middle East and that they will one day rule the world thanks to Jesus Christ. The threat lies in the fact that they create policies to realize what they believe in and have secured a place for themselves in political power. 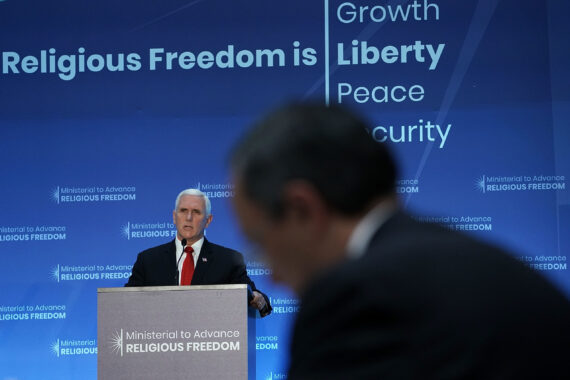 In Turkey, Christianity, Judaism and religions widely accepted in the Far East countries are rarely subject to any research or study. Maybe it is related to the fact that Turkey has the heritage of the Ottoman Empire or to the fact that the country adopted the secularism notion of the French Fourth Republic with the foundation of the modern Turkish Republic.

Of course, various studies are conducted in theology faculties and history of religions departments, but there are hardly any analyses drawing analogies between religions and contemporary world politics. The Western spies affecting the dissolution of the Ottoman Empire have always been discussed, but Christianity and its sects that might affect cultural and behavioral codes of the West have never been mentioned.

Israel is condemned, but no one talks about the religious rules and commands in Judaism that influence the Jewish people’s relations with others. It can be said that while innumerable studies, articles and discussions are produced on Islam and Muslim people in the West especially for the last 20 years, we hardly see such efforts towards Christianity or Judaism in Turkey. Also, there are not concepts like “Christophobia” or “Judaeophobia” as opposed to Islamophobia, which has turned into a political tool amid this atmosphere in the West. As much as Turkey is not the homeland of anti-Semitism, it is also not a land importing this concept. Besides, the occasional clamors of some lobbying organizations against Turkey do not reflect the truth.

In such a tradition, a faith other than Islam has become a popular agenda topic for the first time in Turkey: Evangelism. But viewing what is written and said on the subject, it can be said that Evangelism poses a serious threat not only against the Middle East but the entire world.

The threat is not because evangelicals believe in seven curses that will appear as signs of the apocalypse, that the apocalypse will begin in the Middle East and that they will one day rule the world thanks to Jesus Christ. The threat lies in the fact that they create policies to realize what they believe in and have secured a place for themselves in political power. They are unlike a terror group like Daesh, which emerged in 2014 as a self-proclaimed state and suddenly terrorized everywhere. It is rather a sect that is claimed to be very influential in the administration of the world’s only superpower, namely the United States. It seems like the groundworks of hell were laid with the influence of Evangelism by the father and son presidents George H. W. Bush and George W. Bush, who turned the Middle East into an inferno with post 9/11 slogans like “Crusades” or “the war between good and evil,” and former U.S. Presidents Jimmy Carter and Ronald Reagan, who often mentioned the apocalypse and the sanctity of Israel. Currently, U.S. President Donald Trump’s decision to move the U.S. Embassy in Israel from Tel Aviv to Jerusalem and his policies towards North Korea and Iran are regarded as expediting the path to the apocalypse. Also, some suggest that the Jerusalem move has been the leading incident revealing the Evangelist influence on the U.S. administration.

According to evangelicals, the Jewish people, who are chosen by God, must gather in Israel where Jerusalem will be the capital and Solomon’s Temple will be rebuilt during the Armageddon period. And Jesus Christ will appear only after the Temple is completed. Evangelicals believe in the seven signs that show the impending apocalypse; that pandemics will spread across the world, color of seas will turn into blood red color, all living creatures under the sea will die, the sun will burn the earth, a monster will appear in the region of Babylon and the region will perish. Moreover, it is claimed that they are aspiring to expedite the run up to the apocalypse and object to all kinds of measures that could prevent the process.

They believe that the monster that would appear in Babylon has already appeared in Iraq and Iran; and Iran, North Korea and China comprise the “three evil spirits” they believe to come off from the mouth of a dragon. The situation is grim in view of the U.S. policies towards these countries and that the U.S. did not sign the Kyoto Protocol. According to evangelicals, it is a religious duty to help the Israeli, who will fight against the men of these three evil spirits during the Armageddon War, since they think that they are the people contributing to the fulfillment of God’s plan by fighting to eradicate the evil from the world before the return of Jesus Christ.

It is not known whether Trump believes in these, but Vice President Mike Pence is a strict evangelical. Also, the current Secretary of State and former CIA Chief Mike Pompeo is known to be an evangelical. Trump’s spiritual advisor is Robert Jeffress, who said in August last year that “God has given Trump authority to take out Kim Jong Un.” Trump’s other spiritual advisor is Paula White Ministries, an evangelical who once stated, “send me your money so God will pay attention you.” Trump also has an evangelical advisory board that consists of 24 members, including former politicians, academics and writers aside from pastors.

God save the world!