Everything about Operation Olive Branch

Land forces of the TSK and FSA will simultaneously penetrate the defense lines of the PKK/YPG on the southern and eastern sectors, effectively isolating Afrin. In the following stage, the TSK may force PKK/YPG militants to retreat to Afrin by pushing from northern and western sectors. 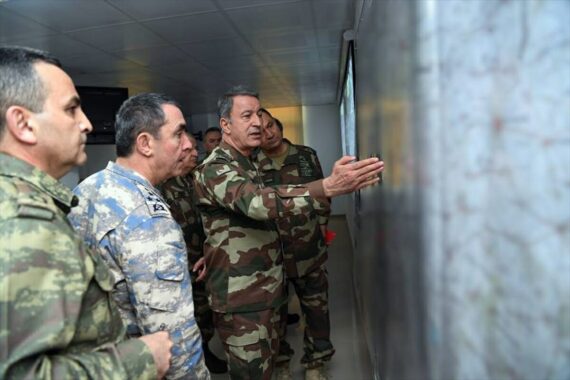 Turkey has been in a long on-going preparation process for an extensive military operation against the PYD/YPG, which the country deems as a threat to both its own national security and to the territorial integrity of Syria. Ankara has been in constant dialogue with countries across the region along with prominent actors in Syria in order to establish political and military premises.

Turkey has launched an operation targeting Afrin, the western end of the terror belt. While the Turkish Armed Forces (TSK) had deployed military forces to the region near Afrin, it has also established a base in Idlib, south of Afrin, effectively surrounding the city. In addition to this, thousands of Syrian opposition soldiers, who were trained through the “train-and-equip” program, were deployed against the PYD/YPG. Turkey is pursuing an initiative similar to the Operation Euphrates Shield (OES), which was launched right after the July 15 coup attempt, and which simultaneously cleansed the defined areas from both Daesh and the PYD/YPG. Operation Olive Branch (OOB) was launched a short time after President Erdogan’s announcement on 20 January, 2018, at 17:00. While the TSK announced the name of the operation as “Olive Branch,” references were made to decisions made by the United Nations Security Council and Article 51 of the U.N. Charter.

What are the geopolitical and demographic features of Afrin?

Located in northwest Syria, Afrin is a district in the Aleppo Province. The district consists of seven towns: Central, Bulbul, Jandairis, Rajo, Sharran, Shayk al Hadid and M’abatli. Its border with Turkey renders the district important in terms of geopolitics. Its surface area is 1850 km2, corresponding to 2% of the total surface area of Syria. Afrin is located in a mountainous region and its elevation is between 700-1269 meters. The distance between its easternmost and westernmost points is 55 kilometers, while the distance between its northernmost and southernmost points is 75 kilometers.

According to the 2004 census in Syria, 64,758 people live in the town center and the total population of the district is 172,095. The city is mostly populated by Kurds. However, Arab and Turkmen and a small population of Yazidis also reside in the region. The city experienced a population increase after the 2011 revolution, as the Syrian regime did not target the city. Yet, figures provided regarding the population of Afrin are contradictory – especially numbers released by pro-PKK/PYD sources are exaggerated. It is estimated that around 300,000 people live in the Afrin District.

Why is Afrin important for the PYD/YPG?

Following the 2011 revolution, the PYD/YPG terrorist organization made an agreement with the Assad regime handed Afrin to PYD, which declared it as its canton in 2013. Since October 29, 2014, the region has been managed by an administration appointed by the PYD. The terrorist organization has eliminated all Kurdish opposition in the region, especially the Kurdish National Council, and has established its hegemony over the region.

After the downing of the Russian aircraft, the terrorist organization captured territories between Tell Rifat and Menagh to the east of Afrin from the Free Syrian Army (FSA) with the support of Russian aircrafts. With this, the terrorist organization forced the Arab population in the region to immigrate. The group then attacked the town of Azez but failed to capture it. Since October 2016, the PYD/YPG has attempted to march on Al-Bab with the occasional air support from coalition forces. However, this march was stopped with the OES.

The YPG claims that it manages Afrin through 47 councils and 898 communes (communities) that organize the people. Even though the region is isolated from the PYD/YPG located on the eastern bank of the Euphrates, it is managed by prominent figures of the PKK such as Halil Tefdem, Ahmed Hudro, Mahmud Berhudan, Behcet Abdo and Nocin, who all receive their orders from Qandil under the chain of command of the Kurdistan Communities Union (KCK).

This region acts like a springboard for the organization, which will allow it to access the Mediterranean Sea. Moreover, the terrorist organization attempts to establish a line of supply through the Amanos Mountains in Turkey in order to mobilize militants with weapons. The TSK and security forces have killed over 40 terrorists trying to cross the border from Afrin. The terrorist organization sees Afrin as an important source of recruitment. They are forcibly recruiting girls and boys aged between 16-18 for their “Self-Defense Force.” There are several boot camps established by the group where these teenagers are trained.

What are some of the alternative scenarios to the Afrin offensive?

Operation Olive Branch was launched at 17:00 on 20 January with military aircraft belonging to the Turkish Air Forces, which entered Syrian air space and began targeting terrorist targets in Afrin. The TSK announced that 108 different locations used as shelter and arsenal by the PKK/KCK/PYD-YPG in Afrin and its surrounding towns were destroyed by 72 aircrafts. In addition, the TSK informed that lines of defense, command centers and border outposts of the terrorist organization were targeted by the Turkish forces from land and air.

During the pre-operation assessments, there were various scenarios about the Afrin offensive. Initially, re-capturing towns like Tell Rifat and Menagh in order to completely surround YPG militants in the region was being discussed. However, the first stage of the offensive indicates that an extensive military operation against the PKK in Afrin will take place.

The extent of the military operation will depend on negotiations made with Russia, as due to the result of an agreement made with the Syrian regime, Russia continues to control Syrian air space. It is known that Moscow is trying to persuade the Turkish regime to pursue a small-scale operation. However, it is definite that Turkey needs an extensive military operation in order to permanently remove the terrorist threat from Afrin.

The operation was launched with intense air raids and support vehicles. After the lines of defense are softened, ground war could be expected to be intensified around the Menagh Air Base-Tell Rifat to the east of Afrin and Shayk al Hadid-Jandairis-Burj Abd Allah to the south of Afrin.

It could be expected that land forces of the TSK and FSA will simultaneously penetrate the defense lines of the PKK/YPG on the southern and eastern sectors, effectively isolating Afrin. In the following stage, the TSK may force PKK/YPG militants to retreat to Afrin by pushing from northern and western sectors. These terrorist elements may attempt to use civilians in Afrin as human shields in order to draw the Turkish armed forces into urban warfare.

The PYD/YPG had been preparing for a probable military operation by Turkey. The PKK controls over 1500 km2 of territory including Afrin and its surrounding cities, where Russia has also begun to establish checkpoints.

It could be assessed that PKK/PYD militants, whose numbers are around 5000-6000, along with Jaysh al-Thuwar elements consisting of approximately a couple of hundred of militants, may attempt to halt the TSK and FSA through asymmetric warfare and hybrid methods. It is known that the terrorist organization has been digging trenches, forming tunnels, placing Improvised Explosive Devices (IED) and mines to certain locations. Moreover, with the courtesy of the U.S., the YPG may attempt to transport anti-tank weaponry that is currently located on the eastern bank of the Euphrates to Afrin. Considering the topography of the region, terrorist elements may attempt to use mountainous parts that are located towards the midwest and northwest of Afrin.

Nevertheless, the terrorist organization does not stand much chance against the TSK and FSA on the plains towards Afrin as well as around Tell Rifat and Menagh regions. It should not be forgotten that Turkey has learned valuable lessons from OES, especially in terms of fighting against anti-tank weaponry and asymmetric warfare methods, and has new inventory such as Unmanned Combat Aerial Vehicles (UCAVs), which could counter such attempts. All in all, Turkey is much better equipped for the Afrin offensive.

What has Turkey learned from Operation Euphrates Shield?

When drawing comparisons between the OES and OOB, there are both similarities and differences. Even though Turkish forces encountered PKK/YPG elements on the bank of the Sanjur River after capturing Jarabulus, it was essentially an operation against Daesh.

OES cleared a territory of 2200 km2 from terrorist elements. While the conflict was mostly on the plains, it was concluded with urban warfare in Al-Bab and surrounding towns. Regime forces along with the PKK constantly harassed the TSK and TSK-backed Syrian opposition forces. As Daesh adopted hybrid and asymmetric strategies along with using civilians as human shields, the TSK had to exact the operation meticulously and steadily. Daesh had carried out asymmetric attacks throughout the OES, attempting to halt the march of the TSK and Syrian opposition forces through bombed car and suicide bomber attacks. The fact that Daesh was effectively using anti-tank weaponry was one of the greatest challenges of the operation. As Turkey engaged in urban warfare for the first time on a cross-border operation, there were certain handicaps regarding military equipment and experienced personnel. Moreover, Syrian opposition forces were not very effective during the initial train-and-equip program.

The majority of these handicaps were addressed with the experience gained from OES. While increasing the number of UCAVs improved close air support and precision strike capacities, protection systems against anti-tank weaponry that is implemented within Turkish tanks made the TSK a force to be reckoned with. There are more personnel in the force who are experienced in asymmetric hybrid conflicts. Meanwhile, Syrian opposition forces are trained and equipped better than before. There is a significant improvement in their battle-readiness. In this respect therefore, when compared to the OES, Turkey is more advantageous in the current operation.