Israel labels almost every critic as anti-Semite not because it is excessively resentful or paranoid in demeanor, but because it is a propaganda technique as important as weapons in today’s post-truth world. 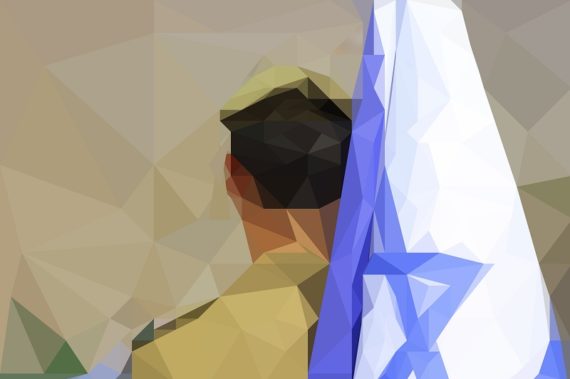 In a speech he delivered at the 74th General Assembly of the United Nations in New York on September 24, Turkish President Recep Tayyip Erdogan held up a poster illustrating four different maps of Israel since 1947 and asked: “where are the borders of the State of Israel? Is it the 1948 borders, the 1967 borders, or is there any other border? How can the Golan Heights and the West Bank settlements be seized, just like other occupied Palestinian territories, before the eyes of the world if they are not within the borders of this State? Does the “deal of the century” aim to eliminate the people and the State of Palestine?”, and added: “The solution is the immediate establishment of an independent Palestinian state on the basis of 1967 borders with East Jerusalem as its capital. Turkey will continue to stand by the oppressed people of Palestine as it has always been until today.”

Although the superpowers of today’s world seem to ignore it, a comparison of these four maps show that the Palestinian territories gradually shrank from 1947 whereas Israel has kept getting bigger, and is likely to get even bigger still. Besides, the dwindling Palestinian territory is not recognized as a state by the U.S. and many European and Asian countries. This is the point of Erdogan’s comparison.

And like the ever expanding borders of Israel, we also face another phenomena, one that is continuously extended with the propaganda and lobbying activities of Israel: the very definition of anti-Semitism. The scope of this term has expanded from encompassing hate speech and racist acts against Jewish people to criticism of Israel itself. So, following his speech in the UN General Assembly, the Tel Aviv administration called Erdogan an anti-Semite.

The term ‘anti-Semitism’ was first used in 1879 by a German journalist, and originally means hostility to or prejudice against Jews. As Orientalist scholar Bernard Lewis said, Christians saw Jews as having a dark and deadly power with skills of cosmic evil. Following numerous periods of tyranny against Jews in the history of Europe, the most systematic and scientific atrocity against Jews in history took place under Nazi Germany. Around six million people were brutally killed just for being Jewish under Hitler’s leadership, including women, children and the elderly. A genocide in the midst of Europe of which witnesses and Holocaust survivors are still alive.

Following the Holocaust, many European countries enacted laws that introduced special protection for Jews separate from other laws related to racism. Denying the Holocaust was criminalized in a total of 14 European countries, including Germany in 1979 and France in 1990. In France, the Gayssot Act made it an offense to deny the Holocaust, a crime against humanity defined in the London Charter of 1945, on the basis of which Nazi leaders were convicted by the International Military Tribunal at Nuremberg in 1945 and 1946.

Although anti-Semitism means hostility to or prejudice against Jews, new definitions of anti-Semitism have been invented by Israel and some writers starting from the 1990s. For instance, anti-Zionism was also included in the scope of anti-Semitism. Israel has been defined as the homeland of the Jews, and criticisms of Israel are associated with anti-Semitism.

In 2017, the European Monitoring Centre on Racism and Xenophobia, a centre which defines the issues related to fundamental rights for the improvement and reform of EU Law incorporated some of these elements into their definition of anti-Semitism. The Center defines anti-Semitism as: “a certain perception of Jews, which may be expressed as hatred of Jews. Rhetorical and physical manifestations of anti-Semitism are directed toward Jewish or non-Jewish individuals and/or their property, toward Jewish community institutions and religious facilities.”

This definition is followed by statements that give Israel some exceptions not made to any other state or nation in the world. The statement goes on to read that: “manifestations of anti-Semitism might also target the State of Israel, conceived of as a Jewish collectivity.” Some examples of the manifestations of anti-Semitism that are associated with the State of Israel are listed as follows: “Denying the Jewish people their right to self-determination, e.g., by claiming that the existence of a State of Israel is a racist endeavor, applying double standards by requiring of it a behavior not expected or demanded of any other democratic nation, and drawing comparisons of contemporary Israeli policy to that of the Nazis.”

According to this, it looks like criticizing Israel will be considered de facto anti-Semitism. For Israeli officials, this seems to be the case already. In response to the argument that it is not even possible to criticize Israel, a test was published in Israel to reveal to what extent the country could be criticized. For Israel, it is possible to distinguish legitimate criticisms of Israel from anti-Semitism using a 3-D test of anti-Semitism developed in 2004 by the Natan Sharansky, Chairman of the Executive of the Jewish Agency. This test and an article on it were published in Jewish Political Studies Review. The test was also recognized by the U.S. Department of State.

The test consists of three main concepts: delegitimization, double standards and demonization. According to Sharansky, hiding behind the veneer of legitimate criticism of Israel constitutes a kind of anti-Semitism that is more difficult to expose. The delegitimization part of the test argues that claiming that the existence of a State of Israel is a racist endeavor discriminates against Jews by singling them out as ineligible for the basic right for self-determination as is determined by international law. According to this discursive contention, since any discrimination against a specific ethnic, religious, racial or national group is considered a type of racism, delegitimization of the Jewish people right to self-determination is racism against Jews. (To put it otherwise, you can freely express it when other states engage in racism, but you will commit the very crime you are talking about when you accuse Israel of racism!)

According to the second part of the test, namely Double Standards, “If a person criticizes Israel and only Israel on certain issues, but chooses to ignore similar situations conducted by other countries, they are performing a double standard policy against Israel.” (This is actually a rephrasing of the first title. The criticisms of other countries are within the limits of freedom of expression but it is forbidden to issue such criticisms on Israel!) The second title reads: “The implementation of a different moral standard for Jews and Israel compared to the rest of the world discriminates against a specific group and is labeled as antisemitism,” (Then several other countries might be added on the list while criticizing Israel). Meanwhile, the test states that the boycott, divestment and sanctions movements, such as BDS, might also be the manifestations of anti-Semitism, “since any discriminatory act to isolate Israel in international arena and the rejection of equality before laws for Israel is a new anti-Semitic behavior.” (This article indicates that boycotting Israeli products is a manifestation of anti-Semitism. And it does not seem possible to avoid it even if you add some other countries on the list beside Israel).

The third D is demonization. Demonizing Jews is of course racist, but this goes for all races in the world. It would be acceptable to underline this factor in reference to the “Jewish image in Christianity”, but there is a significant difference here: portraying the State of Israel as demonic is anti-Semitic whereas it seems to be no problem to do so for other states. Moreover, expressing conspiracy theories about Jews, referring to the power of Jews as a collective, and stating that the Jews control the media, economy, government and other societal institutions are also defined as anti-Semitic actions. Among the 3Ds, this title seems to be the only one that could be handled within the scope of a traditional definition of anti-Semitism.

The perspectives and criteria that form the basis of this test have been included in some legal regulations for the past few years, and is reflected in the anti-Semitism definition of the European Monitoring Centre on Racism and Xenophobia in 2017. In Germany, anti-Zionism was included in the scope of anti-Semitism, and discussions in France are ongoing. Calls to boycott Israeli products have been recognized as illegitimate anti-Semitic actions in Germany and in some U.S. states.

According to the 3D test, the limits to the criticisms against Israel’s policies and actions are as narrow as today’s Palestinian territory. For instance, in his 2006 book entitled Ethnic Cleansing of Palestine, renowned Israeli historian Ilan Pappé seems to have breached most of the conditions of elements of the 3D test when discussing the gradual genocide in Gaza and depicting what has been done to Palestinians in the region. After the book was published, Pappé was subjected to pressure in the University of Haifa, where he was employed at the time, and finally left Israel after being subjected to diatribes and serious accusations by various circles in the country. He is currently a faculty member in the history department of the University of Exeter in England.

Unfortunately, anti-Semitism is a phenomenon that is still present in the world. Today, we increasingly confront many different kinds of racism against Muslims and various other minorities. But Israel has reached such an extreme point that it even regards Jews who criticize the Israeli state as anti-Semitic, a stance which is supported by several other countries, particularly by the U.S. The absurdity of the situation is best portrayed by this anecdote:

“-The weather is cloudy, I think it might rain.

-Did you just call me a duck?”

Of course, Israel labels almost every critic as anti-Semite not because it is excessively resentful or paranoid in demeanor, this is a propaganda technique that has become a major power play and is at least as important as weapons in today’s post-truth world. What is required is to speak in the name of truth and justice against Israeli crimes undauntedly and to emphasize the truth across every platform as Israel does. As President Erdogan lately expressed, the best possible solution is “the immediate establishment of an independent Palestinian state on the basis of 1967 borders with East Jerusalem as its capital.”