If the U.S. Senate approves the bill to punish Ankara, then it will punish its own defense company Lockheed Martin as well. Turkey is one of the company’s biggest customers, with 116 stealth fighters on order. 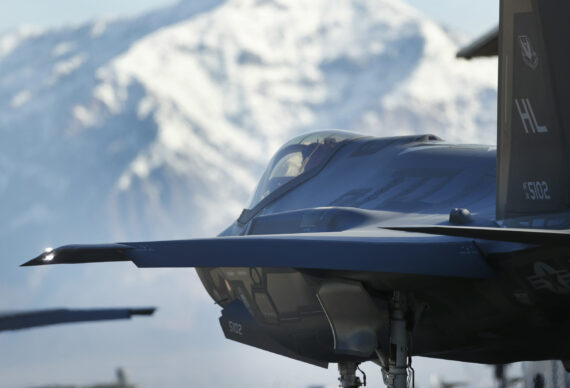 An F-35 fighter jet taxies out for a training mission at Hill Air Force Base on March 15, 2017 in Ogden, Utah. Getty Images

Since the beginning of the 2000s, Turkey has been one of nine prime partner nations of the JSF and one of its biggest customers – with 116 stealth fighters on order. Besides, Turkey has been partnering with Lockheed Martin for over 25 years, primarily on the F–16 and continued this partnership by joining F–35. However, a bill introduced by senators Lankford, Tillis and Shaheen aims to prevent the transfer of F-35s to Turkey and aims to keep the country out of being a maintenance depot for stealth fighters.

The bill set the stage for reconsidering relations between Turkey and the U.S., as it seems like the two country’s are no longer strategic partners, but rather are turning into foes. As can be expected, neither will the U.S. or Turkey live happily ever after, nor will the hostile attidue of the senators continue forever. In any case, in the end, “mutual interests” will probably suppress the “clash of interests.”

U.S.-Turkey relations have soured since March 1, 2003, when the Turkish Parliament refused to pass a proposal to allow U.S. troops to operate from the Incirlik Base during the Iraq War. Since then, Turkey has repeatedly come face-to-face with the U.S. in the Middle East. So the current F-35 case is not the first and will not be the last case for Turkey having experienced undesired congressional responses whenever the country disagrees with U.S. policy due to its defense and security needs. An example of this in recent years is the big clash that arose due to the “local force” that was initially designed by the U.S. to be used against Daesh.

For Turkey, the PYD/YPG is a terrorist organization and the Syrian arm of the PKK – which the country has been fighting against for almost 40 years both within and outside its borders. The same terrorist organization – the YPG – is accepted by the U.S. as the most capable ground force (although it is initially listed by the CIA as an offshoot organization of the PKK in Syria) in fighting Daesh, and thus deserves to be fully supported with aids and arms. In addition to this, the Turkish government has been seeking the extradition of Fetullah Gulen, while American pastor Brunson is still being judged in Turkey. Tensions again rose to a higher level due to the AK Party’s severe criticism towards Israel and U.S. opportunism in Syria and Palestine, as well as Turkey’s planned purchase of S400 systems and the contract signed for domestic industrial cooperation.

Ankara eventually got used to undesired responses, threatening patterns of Congress and sanctions whenever the interests of the U.S. clashed with Turkey’s. As you may also recall, the Cyprus issue (Johnson’s letter warning Turkey not to use NATO equipment), the 1974 Peace Operation (U.S. Congress to impose an embargo on arms transfers to Turkey), and the political differences between the U.S. and Turkey, especially in regards to the fight against terror, are the first examples that come to mind. Congress is once again utilizing the punishment methodology on its strategic partner and wants Turkey to be sanctioned if Ankara completes the purchase of Russia’s S-400s. However, Congress needs to remember that the U.S. was also a bidder in the T-LORAMIDS but could not fully meet Turkey’s criteria in regards to technology transfer, local contribution, delivery date and price.

Besides, Congress should also keep in mind that Greece is the only NATO member that purchased the Russian made S-300PMU-1 system in the mid-1990s (Bulgari and Slovakia are also NATO members that posses S-300s in their inventories). Moreover, at the NATO Missile Firing Installation in Crete, in December 2013, Greece carried out its first test firing of the missle as part of an operational live exercise, “White Eagle.” Here we must ask why Greece has the privilege to make use of a Russian system operative after so many years and why Israel is the only country allowed to customize U.S. F-35s.

The bill is a political reaction against the AK Party government, and is not really dealing with technological concerns. Certainly, the political reasoning behind the bill is Ankara’s close ties with Moscow. For the U.S. and NATO, F-35s symbolize the deterrent power of the West against challenger powers such as Russia and China. If Turkey purchases S400s, then Turkey will become a strategic deterrent with Russian military technology. If Russia sells this system to a NATO country, then it will also increase its own current deterrent.

From a different perspective, the main goal of acquiring high tech systems such as F-35s is to increase deterrence and military capabilities against hostile state and non-state military actors. As a matter of fact, the U.S. clearly defines the potential hostile countries as Russia, China, North Korea and Iran. Therefore, Turkey’s cooperation and trade in military technology with Russia is somewhat perceived as a successful attempt of the Putin administration to shade U.S. power. However, Turkey’s external orientation in purchasing a missile system from Russia must be analyzed through the whole process – namely how Turkey was left alone in struggling to meet its defense and security needs.

If Senate approves the bill to punish Ankara, then it will punish its own defense company Lockheed Martin as well. Yet Turkey is one of the company’s biggest customers, with 116 stealth fighters on order. Either way, Turkey will pay a high price for a fifth-generation jet fighter purchased from either the U.S. or another country. None of the world’s largest arms exporters would want to lose a customer such as Turkey while Russian and Chinese companies are dying to sell their own combat jets. In other words, during a time where rivalry is increasing among suppliers, none of the world’s largest arm exporting countries – including the U.S. – would ever want to lose such a major client. In this respect, the Senate needs to carefully examine its gains and losses in regards to the income that will be earned by companies within the defense ecosystem as well as their power of lobbying. Losing Turkey by keeping it out of the JSF also means that the U.S. would weaken its own strategic objectives in the Middle East.

What really happens if Turkey is left out of the F-35 program?

Firstly, Turkey’s deteriorating relationship with the U.S. will worsen; the increasing tension between the two countries will bring unfavorable reflections over deals in areas such as terrorism, especially against Daesh in Syria. More, this decision might also have negative impacts on relations between Turkey and NATO. As it is known, NATO plans to set up a 30,000-strong reserve force in order to improve its combat readiness. As a NATO member sanctioned by the U.S., Turkey would most probably not want to contribute to the Atlantic Alliance and would not want to take an active place in a variety of missions.

Secondly, Turkey will bring the issue to a trial and file a claim for compensation in accordance with the original agreement. This agreement is not only about purchase through foreign procurement, but is also about co-production. For instance, Turkey’s Roketsan collaborated with Lockheed Martin for the development, production, marketing, selling and supporting of Turkey’s SOM-J air-launched cruise missile for the F-35 Lighting II combat jet. Likewise, TAI has also undertaken important responsibilities in contributing to the program. For instance, one of the most complex structural sections of the aircraft, “F-35A Center Fuselage” is produced by TAI as a second source. There are also other work-packages such as F-35 A/B/C Composite Components, F-35A’s Metallic Sub-Assemblies and Air Inlet Ducts and F-35 A/B/C Air-to-Ground Alternate Mission Equipment Pylon Manufacturing.

Thirdly, Turkey might embark on a quest to buy fifth generation fighters from other countries such as Russia’s SU-57 and China’s J-31. However, if Turkey decides to buy a fighter jet from a non-NATO country, this may lead to infrastructure and technology problems. Lastly, the Senate’s sanction method does not seem to be the best way to keep Turkey in NATO’s security architecture. While political issues are undermining relations between Turkey and the U.S., the military aspect is without a doubt the most crucial part to sustain strategic relations between the two countries.