Across the political spectrum, this is a period of the unknown; the neo-liberal or leftist perspective that has clamored for change away from an over-industrialized, air-polluting and ultra-capitalist world has remained largely ambivalent about the radical developments and grounding of global capitalism. 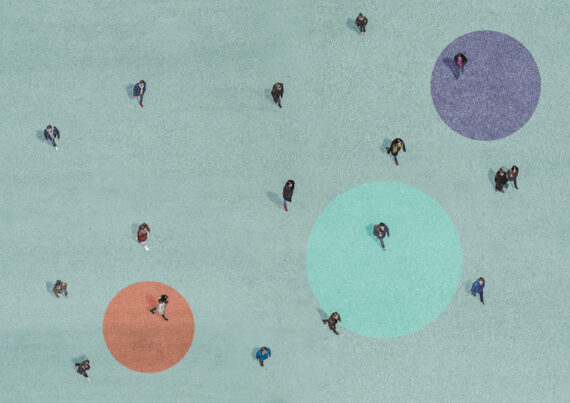 Social distancing has been a norm now. Physical work is still needed but much of the ‘office’ work that involves a pyramid of people has quickly proven to be unnecessary. Illustration by Bernhard Lang, Getty Images

…that many had the plague in their very blood, and preying upon their spirits, and were in themselves but walking putrefied carcasses whose breath was infectious and their sweat poison, and yet were as well to look on as other people, and even knew it not themselves…

From A Journal of the Plague Year (1722) by Daniel Defoe

A pandemic has hit the world and it is profoundly changing the political, economic, social and spiritual aspects of life in the 21st century. Across the political spectrum, this is a period of the unknown; the ‘neo-liberal’ or ‘leftist’ perspective that has clamored for change away from an over-industrialized, air-polluting and ultra-capitalist world has remained largely ambivalent about the radical developments and grounding of global capitalism. On the other hand, the ‘nationalist right’ has been forced to open the money-box and pour it on the welfare state while simultaneously nationalizing railways (in the U.K.) or getting car manufacturers to produce health care equipment and beer companies to produce hand sanitizer (in the U.S.).

The solution to ‘defeating’ this pandemic is slow, methodical and inexact- everything that is the opposite of post-modern life and what it is built upon. One could argue that isolation is not the biggest obstacle (society already does much of its work and leisure online) but rather the leap into the great unknown. People have become so used to planning and preparing every detail of life that to not do so has created a crisis of the mind. Doing things fast, exact and in a precise manner has suddenly changed to an approach that is slow, inexact and without a timeline that countries, businesses, or society can control.

The immediate impulse to revert to late 19th and early 20th century ideas of rigidly defined borders and petty protectionist nationalism has been disastrous. Closed borders and blocked shipments of goods such as key medical supplies within the EU and over the U.S.-Canada border are just a few examples of surprising non-cooperation between allies and political trading blocks. The World Health Organization (WHO) has been largely ignored by the very countries that were instrumental in setting it up, and shockingly there is little trans-national coordination compared with previous viral situations such as Polio (the 1950s onwards), SARS (2002-2004) and Ebola (2017-2019).

In many ways, this is symptomatic of the last three decades of global politics. Tighter security and borders were a hallmark of the late 1990s and early 2000s and there has been a severe backlash against the concept of an interconnected and multi-cultural world. A revival of neo-fascist movements has become increasingly mainstream in the last decade and the conflict of the early 1990s in the Balkans has proven to be less an aberration and more a template of what can happen when extreme nationalists mix a mono-cultural mythical history with populist politics. Recent news stories of cruise ships unable to dock; slurs directed at people of Far-East Asian descent in North America; foreign nationals unable to secure any kind of accommodation in India; and people from large urban areas being met with hostility in rural areas of France are just a handful of examples of pre-existing instincts laid bare. In this context, the domino effect of locking down borders (however necessary this may have been to stop the spread of coronavirus) and being wary of foreigners seems less of a shock and more of a disjointed continuum of the last few decades that has reached pre-WWII levels of paranoia and prejudice.

One of the many things made evident in the last months has been the amount of money Western governments can pump into the citizenry – hundreds of billions of dollars, pounds, and euros have been injected into the employers, employees and anonymous workers in these nations, seemingly from nowhere. The stigma and social-Darwinist approach to a kind of hyper-capitalism has been removed overnight. Physical work is still needed (obviously, health care workers but also jobs such as delivery drivers and grocery store workers) but much of the ‘office’ work that involves a pyramid of people has quickly proven to be unnecessary. Working from home has long been accepted in certain segments of the American work culture but now other European and Asian nations are being forced to re-examine an office culture that often places showing up and ‘looking busy’ over actually doing the work needed.

Poverty is rampant with post-industrial cities and smaller regions dealing with unemployment and wages that cannot keep up with a high cost of living as well as housing that is often substandard.

All of this has not happened in a vacuum – in the U.K. the homeless population has been on the rise for the last decade. Poverty is rampant with post-industrial cities and smaller regions dealing with unemployment and wages that cannot keep up with a high cost of living as well as housing that is often substandard. In the U.S., the divide between rich and poor has been growing for the last half-century at alarming rates and an informal economy of freelance, temporary work and ‘under-the-table’ jobs is integral to a system that is now broken.

Innovation often comes out of calamity and a need to resolve a problem. For instance, New York City at the turn of the century is a potentially thriving metropolis that is burdened by the hundreds of thousands of horse and buggies (and subsequent manure-waste problem that leads to disease and blocks growth). Within a few years technological and business innovations make the car an affordable option for the masses (Ford’s Model T) and the previous problems are eliminated almost instantly.

With the transition to online platforms, work and education has largely carried on as usual. However, it has resulted in some significant changes and struggles in educational fields that require labs, studios and physical materials to continue. Technology has already been in use, before the virus, and has changed the nature of teaching in the last decade – the relatively quick adaptation by both teachers and students shows that a world of online assignments, presentations and correspondence was already familiar. It also reflects that teaching at its core is and always will be about the interaction and mentoring of the student; it has exposed how unnecessary much of the infrastructure and public relations machine of the contemporary institution is superfluous to the actual knowledge exchange- how little the ‘middle-managers’ actually contribute to the essence of what education is about.

The doomsday scenario is a view on the fringes of society – in contrast to the people of every major faith around the world where the message has been fairly consistent and clear.

It is not just governments or states that will decide and guide the post-pandemic educational order – a commitment to teaching and learning creative innovations, business models and previous technologies (re-invented) will all play a significant role in going forward. This is a fundamental lesson of historical innovations from the use of the wheel and axel to Model T and beyond.

Social distancing, washing regularly and the use of a mask were all things recommended during the black plague of Europe and the ‘Spanish’ Flu or 1918 pandemic. During the medieval plagues a segment of Christian society took to beating and punishing themselves (self-flagellation) as well as others in cruel and barbaric ways. During the 1918 pandemic, there was much resistance to the disbanding of Church gatherings (in the U.S. many clandestinely got together in fields) and the Hajj went ahead as normal.

In comparison the current closure of Mosques, Churches, Synagogues and Temples has largely been followed without incident around the entire world. Religious and community leaders have been among the most rational in the balance of faith and science (keeping one’s prayers while following social distancing to avoid the virus spreading) Rather than adversely affecting the frequent, spiritual minded visitor, the closure of places of worship may strengthen the transcendental and moral resolve that already exists. In comparison, the more secular-minded may have difficulty in not being able to visit a place of worship in a time of immense socio-political and economic change. In other words, those that are looking for some spiritual meaning to make sense of this are lamenting not being able to go (such as the closure of Easter Mass throughout the world), even though they usually would not care or pay attention to a place of worship and its function in society.

A subtle yet distinct change of tone concerning words and actions of faith can be observed over the last few weeks in the U.K. and other European states. People are ‘praying’ for others (something that in my years of living in the U.K. I have never heard before) and expressing humanitarian solidarity. The doomsday, end-of-world scenario is a view on the fringes of society – in contrast to the people of every major faith around the world where the message has been fairly consistent and clear: this is a test that we have to deal with and come out stronger and more humane as a tribal group, country, religion or ummah.